Good morning. One day before the election, we rank the 12 big outcomes to look for. 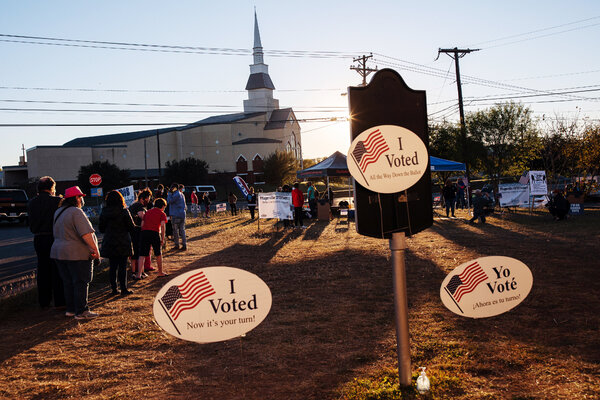 With only one day before Election Day, we’re using today’s newsletter to offer our ranking of this year’s 12 most important outcomes.

1. The presidency. This one is obvious. The U.S. will be a very different country under a second Trump term as opposed to a Joe Biden presidency.

The first things to watch for tomorrow night will be whether Biden wins Florida, Georgia or North Carolina. Any of these will probably give him the presidency. If he seems to be losing all of them, the country may be looking at a long night — or a long week — of vote counting, with the outcome coming down to some combination of Arizona and Pennsylvania.

2. Senate control. Even if Biden wins, he may struggle to pass major legislation unless Democrats also control the Senate. And if President Trump wins, the Senate will determine how many judges he can appoint in a second term.

The Democrats are likely to lose the Senate seat they now hold in Alabama, meaning they would need to flip four Republican-held seats to retake control if Vice President Kamala Harris is breaking Senate ties (and five if Vice President Mike Pence still is).

Democrats have held consistent if small leads over four Republican incumbents in Arizona, Colorado, Maine and North Carolina. The races for five other Republican-held seats are tight: Iowa, Montana, South Carolina and two in Georgia.

3. State legislatures. Control of state legislatures is especially important in a census year, like 2020, because they draw congressional districts in many states. Over all, Democrats control 19 legislatures and Republicans control 29, with Minnesota split and Nebraska nonpartisan.

Tomorrow, Democrats hope to take full control in Arizona, Minnesota and North Carolina, and to win partial control in Iowa, Pennsylvania, Michigan and Texas. (Stephen Wolf of Daily Kos has a detailed breakdown.)

4. The House. This would be higher on the list, but the result seems clear. Democrats are heavy favorites to retain control and maybe expand their 35-seat margin.

A few races to watch: Republicans are in danger of losing seats in New York, New Jersey and Ohio. Democratic incumbents are at risk of losing in southern New Mexico, Staten Island and Minnesota.

5. Prosecutors and courts. Some large cities and counties — including Los Angeles, Orlando and Arizona’s Maricopa County — could elect prosecutors who have argued against mass incarceration. These candidates typically oppose the death penalty and the prosecution of simple drug-possession cases, as Daniel Nichanian of The Appeal explains.

In Michigan and Ohio, Democrats hope to gain control of the state supreme courts, which could reduce gerrymandering, protect labor and voting rights and uphold governors’ pandemic policies.

6. Populist economics. Several states will consider ballot initiatives intended to reduce economic inequality, including: a measure to establish a $15 minimum wage in Florida; a step toward a more progressive income tax in Illinois; higher taxes on the affluent in Arizona; and an increase in property taxes on businesses in California.

7. Abortion in Colorado. Voters will decide whether to ban abortions after 22 weeks of gestational age. Many red states already have such laws, but Colorado would become arguably the most liberal state to adopt one.

8. Puerto Rico statehood. Citizens there will vote in a nonbinding initiative to signal whether they want the island to become a state. If it passes, a future Congress is more likely to add two new states — Puerto Rico and Washington, D.C.

10. The future of Uber and Lyft in California. The companies are backing an initiative that would allow them to continue paying their drivers as independent contractors rather than employees, saying it’s vital to the business model. Many labor unions oppose the measure, saying it would prevent drivers from earning a living wage.

11. Ranked-choice voting. Voters in Alaska, Massachusetts and a handful of cities will decide whether to adopt ranked-choice voting, which makes it easier to vote third party without undermining a major-party candidate. Currently, only Maine uses the system statewide.

12. Drug policy. Arizona, Mississippi, Montana, New Jersey and South Dakota will consider versions of marijuana legalization, while Oregon and Washington, D.C., will vote on whether to ease restrictions on mushrooms.

For a longer list: See this guide to “what’s on the ballot,” by Nichanian, a political scientist.

Both campaigns will be in Pennsylvania today, the state most likely to decide the election. Biden will also campaign in Ohio, which Trump flipped from the Democrats in 2016.

The Times’s final polls of the 2020 election show Biden leading in four battleground states: Arizona, Florida, Pennsylvania and Wisconsin. Biden has a meaningful but not commanding lead in Pennsylvania, The Times’s Nate Cohn explains.

The Texas Supreme Court denied a Republican attempt to throw out more than 120,000 early ballots cast at drive-through locations in the state’s largest county, which is heavily Democratic. But a Republican-appointed judge has called a hearing today in a nearly identical effort in federal court.

Trump’s election night party will take place inside the White House and could involve around 400 guests — a potentially dangerous number for an indoor event during the pandemic.

England is shutting pubs, restaurants and most retail stores for at least a month, as health experts warn that the current wave could overwhelm hospitals.

Dr. Scott Atlas, the White House coronavirus adviser, went on a Russian state-sponsored news show to play down the seriousness of the pandemic. He later apologized.

Trump suggested at a rally that he might fire Anthony Fauci, the country’s top infectious disease expert, after Election Day. Fauci had told The Washington Post that the U.S. “could not possibly be positioned more poorly” heading into the winter.

Typhoon Goni made landfall in the Philippines with sustained winds of 135 miles per hour, the most powerful storm to hit the country in years. At least 16 people died.

An earthquake off the coast of Turkey killed at least 62 people and injured more than 900. Rescuers this weekend continued to dig through tons of rubble for survivors in the city of Izmir, the country’s third largest.

Trump brought the news media four years of ratings and page views. Now, leaders in the industry are planning big shifts in their strategy, no matter who wins the election, The Times’s Ben Smith writes.

Johnny Depp lost a court case against a British newspaper that called him a “wife beater.”

A Morning read: “When I came in from Columbus Circle into the park? I just started crying. The exact same emotions.” The New York City Marathon was canceled this year, but that didn’t stop some runners.

Lives Lived: After he was fired by The New Yorker, the journalist Dan Baum told his story in 350 tweets in 2009, producing one of the first examples of a Twitter thread. He died at 64.

The Times can help you navigate the election — to separate fact from fiction, make sense of the polls and be sure your ballot counts. To support our efforts, please consider subscribing today.

IDEA OF THE DAY: A name game

How are Americans with the first name Jennifer planing to vote? What about people named Joe — or Donald?

My colleagues and I have created a 10-question quiz that lets you see how well you can answer questions like these. It’s based on recent Times polls of more than 17,000 likely voters across 18 battleground states. We learned a lot about politics and culture while putting together the quiz, and we hope you enjoy it.

This winter squash and wild mushroom curry is perfect for a fall evening (and it’s vegan). The key is to use a mix of mushrooms, like oyster, shiitakes and portobellos.

“The Best of Me,” David Sedaris’s new book, presents a collection of stories and essays spanning the author’s career. Whether you are familiar with Sedaris’s work or not, “You must read ‘The Best of Me,’” Andrew Sean Greer writes in a review. “It is miraculous to read these pieces placed close together, the earliest written without any knowledge of where things would lead, the last guffawing at the ridiculousness of where they did.”

The painter Bob Ross, with his iconic perm and gentle voice, filmed his PBS show “The Joy of Painting” in Muncie, Ind. Now, the city is home to “The Bob Ross Experience,” a permanent exhibit of memorabilia like Ross’s easel and brushes. The culture reporter Sarah Bahr describes the lively scene on opening day.

In need of some stress relief? Here’s a great distraction.

The pangram from Friday’s Spelling Bee was familiarly. Today’s puzzle is above — or you can play online if you have a Games subscription.

Here’s today’s Mini Crossword, and a clue: Like cutting your own hair (five letters).

P.S. The word “squiddish” — in an article about the ram’s horn squid — appeared for the first time in The Times yesterday, as noted by the Twitter bot @NYT_first_said.

Today’s episode of “The Daily” is a viewer’s guide to election night. On the latest Book Review podcast, Alex Ross discusses his new book on the German composer Richard Wagner.

Lalena Fisher, Claire Moses, Ian Prasad Philbrick and Sanam Yar contributed to The Morning. You can reach the team at themorning@nytimes.com.