The spell of unsettled wet and windy weather we’ve seen recently across parts of northwest Europe will ease later in the week, according to BBC meteorologist Sarah Keith-Lucas. She told viewers that this is a result of high pressure, which is set to build in the Atlantic. However, she noted that for the here and now, there is still quite a lot of cloud across parts of the UK up towards Norway and Sweden.

Ms Keith-Lucas said: “Brisk winds, heavy showers, could be some coastal flooding and some snow around too.

“There’s also this trailing weather front which is pushing south across parts Spain, France, Switzerland up towards Poland as well.

“Towards the southeast of that weather front, most places will be dry and warm.

“But there are scattered showers and perhaps some thunderstorms developing through Cyprus and Turkey as well.” 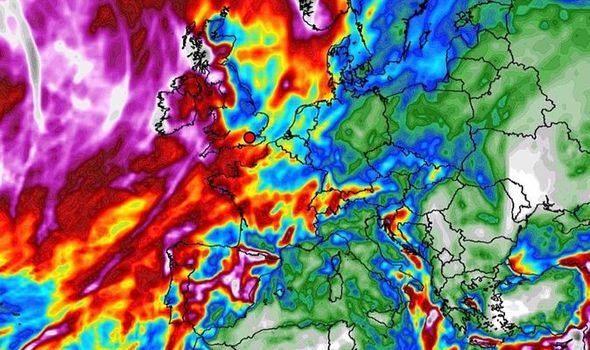 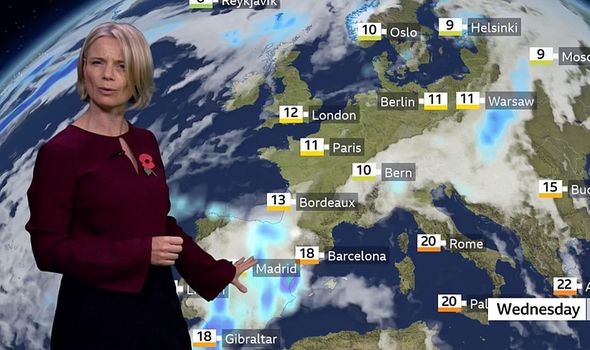 She continued: “It will be drier for the likes of Greece, Croatia and much of Italy.

“But then to the north of that, we’re back into that weather front, bringing those showers.

“To the north of that, for Scandinavia, it will be unsettled.

“In fact, it will be still rather cool and blustery conditions with low pressure sitting close by.” 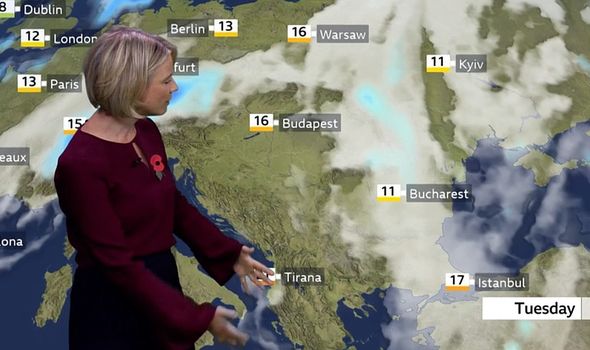 The weather presenter added: “As we move into the middle part of the week, higher pressure will start to build across the UK into northern France as well.

“There will be less windy, drier conditions here.

“There will also be further downpours developing through parts of Portugal and Spain, quite heavy at times here.” 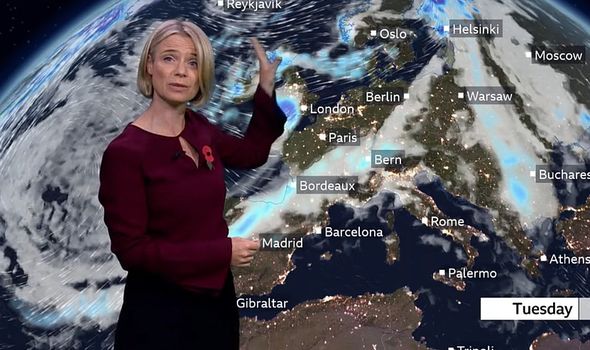 Ms Keith-Lucas told viewers: “And that trailing weather front is still sitting across parts of Austria in towards Poland as well.

“London will be gradually warming up as we look towards the end of this week.

“But further heavy downpours around for Madrid over the next four or five days or so.

“However there’ll be a bit of rain for Moscow and Kyiv by Thursday.”