RIFLE, Colo. — At the Shooters Grill, whose waitresses pack heat, I found Gary Nichols enjoying a burger. A man with bright blue eyes and a shock of gray hair, he got right to the point.

“Trump has my vote,” he told me. “I’ll go with whoever supports my beliefs and my freedom.”

For Nichols, an investigator in the sheriff’s office in nearby Moffat County, where he’s worked for more than 35 years, the Second Amendment is “probably top of the lot.” The right to carry a gun “is just a basic freedom,” he argued. “It’s about individual choice, self-thinking, not having the government think for us, the right to protect ourselves.”

Look, Nichols said, “this is how we started. People came here, out to the West. They worked hard, helped their neighbor. America was not about government interference. It was about doing the right thing. Biden and Harris are way to the left of what I consider good for America. They’re always putting America down. I believe in this country.”

There you have it. The soul of America is on the ballot Tuesday, any way you look at it. For Joe Biden and the Democrats, the election is about rescuing American democracy and restoring decency in a nation dragged into the mire by President Trump’s lies, self-obsession, racism and creeping autocracy. It’s about firing a corrupt charlatan who has sullied the Oval Office and sown the violence that could well erupt after the vote.

For the Trump Party, still known for some reason as the Republican Party, it’s about preserving American self-reliance — the God-fearing, straight-talking and gun-toting heart of the frontier — against Biden’s politically correct socialist takeover. It’s about the unbridled spirit of the land of the free, where no pandemic should shutter business.

These two Americas often live in proximity. Rifle, a small conservative ranching town, is a little more than an hour’s drive from the Democratic stronghold of Aspen, where the “Aspenites,” as they are known here, hold festivals on the state of the world. But they might as well be on different planets, so impossible has dialogue become.

Trump, a multimillionaire from Queens, has exploited this division with astute cynicism. He does not know which way is up with a Bible, could not shoot an elk if it stood in front of him on Fifth Avenue, and has no idea what morality means. Yet he has become the hero of millions of upstanding, churchgoing, rural Americans like Nichols, who grew up with guns and have never had it easy. The president’s political heist defines demagogy in the digital age.

I put this to Nichols. Sure, he told me, Trump says things that make him cringe. “If he were a member of my congregation, I’d probably go over and talk to him.” But that’s small stuff. Trump, he said, “stands against abortion, kept us out of wars, brought industry back, defended the Second Amendment and is big on fossil fuel. We cannot go solar overnight.”

I looked around the restaurant. Waitresses with guns holstered on their hips. A cardboard cutout of Trump with a red MAGA hat. Signs saying, “We don’t call 911, we use Colt.” And “Smith & Wesson spoken here.” And “Keep Calm and Carry.” And “God, guns, Trump.” And “Don’t Tread on me.” Copies of the Constitution and the Declaration of Independence.

The Shooters Grill is owned by Lauren Boebert, a 33-year-old hard-right Republican who, as my colleague Carl Hulse observed, has something of the combative flourishes of Sarah Palin. Boebert, who did not respond to a request for an interview, beat Representative Scott Tipton, the five-term Republican in Colorado’s Third Congressional District, to win her way into the general election. Despite several brushes with the law — including a citation for disorderly conduct and a recent cease-and-desist order for allowing indoor dining despite quarantine restrictions — she’s in a tight race against Diane Mitsch Bush, the Democratic candidate.

Colorado has been losing its swing-state status as an influx of immigrants and young people has settled in the more urban and liberal Front Range, east of the Rockies. That, combined with Trump fatigue, has nudged the state into what looks like secure blue territory. But Boebert’s outspoken campaign, symbolized by the Glock 26 on her hip, has resonated.

It’s that soul thing. “We are in a battle for the heart and soul of our country,” she likes to say — a Biden-through-the-glass-darkly riff. Or, “Our country is on the line.” For Boebert, a mother of four boys, who quit high school her senior year before earning a G.E.D. certificate, her hardscrabble battle to make it defines the can-do American spirit Democrats want to stifle.

“Hell no, you’re not,” she famously declared when Beto O’Rourke, then a Democratic presidential candidate, said, “Hell yes, we are going to take your AR-15, your AK-47.” 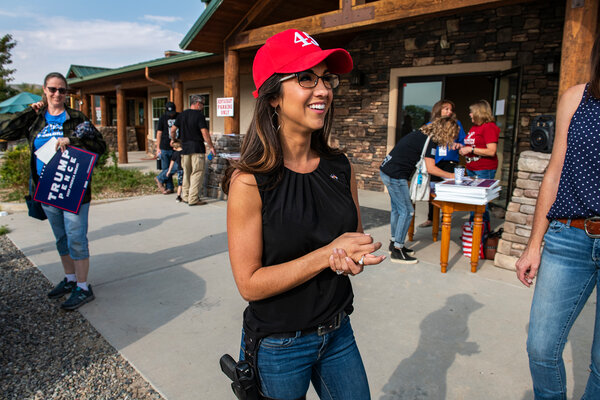 Boebert is backed by Lanny and Jonilyn Hall, two “1,000 percent” Trump supporters, who were also lunching at the Shooters Grill. They moved west from what Lanny called “the communist state of Washington, D.C.” He has grown his blond hair long and won’t cut it until the “propaganda bull” of the virus is over. “It’s my Covid rebellion,” he told me. As for Biden, “If he wins, he’ll open borders and give immigrants everything we worked for.”

Jonilyn Hall, who drives a school bus, loves Trump because he “has done a lot for the vets,” and her father, who will turn 100 next month, fought in World War II. “Our country is special,” she told me, “and with the Democrats we’ll lose that Constitution.” She worries about violence after the election. “There is going to be chaos,” she said, “and those Democrats and liberals will be to blame.”

Everyone I spoke to in Rifle agreed that the election would not go smoothly. Tamara Degler, the owner of the Crescent Moon Spiritual Goods store and a former nurse, told me, “Protests? Violence? Yes, for certain.” She called Trump “a high-vibration person sent to guide us through this time.”

It’s Trump, of course, who has done everything he can to stir doubt and violence around the election. He will not go easily. But in the world of Rifle, it’s Black Lives Matter pillagers who have created this America pregnant with tumult.

As I was talking to the Halls, one of those gun-holstered waitresses approached me to say she had spoken to Boebert, who did not want me interviewing people in her restaurant. I stepped outside and carried on the conversation there.

When I went back to my table, she approached me again to say Boebert wanted me out of the restaurant. Period. On what grounds? “She just wants you out.”

That’s what freedom may look like in a second Trump term: more the my-way-or-the-highway muzzle of a Glock than the liberty enshrined by the Constitution and the rule of law.