People across Poland stayed off their jobs and crowds gathered for a seventh straight day of street protests Wednesday in a mass outpouring of anger at a top court ruling that bans abortions in cases of fetal abnormalities.

In Warsaw, protesters marched from the office of Ordo Iuris, a conservative group that has pushed for a full abortion ban, to the parliament building, which was surrounded by police officers in riot gear. Large crowds also filled the streets in other major cities, including Krakow, Wroclaw, Szczecin and Lodz.

The nationwide strike and protests come amid a deepening standoff between angry demonstrators and Poland’s deeply conservative government, which pushed for last Thursday’s court ruling and has vowed not to back down.

Rage over the ruling, which would deny legal abortions to women even in cases of fatal birth defects, has been directed at the Roman Catholic Church and Jaroslaw Kaczynski, the ruling party leader and most powerful politician in Poland.

Kaczynski said in the past that pregnancies involving even fetuses that are badly damaged and have no chance of survival outside the womb should “still end up in a birth, so that the child can be baptized, buried, have a name.”

Kaczynski accused protesters of seeking “to destroy Poland” late Tuesday and called on his party’s supporters to defend churches “at any cost.”

He spoke to a camera backed by Polish flags in an announcement that some critics compared to a notorious announcement of martial law in 1981 by communist leader Wojciech Jaruzelski to crack down on anti-regime protests.

Some saw Kaczynski’s words as an incitement to violence. The 71-year-old holds the job of deputy prime minister in charge of police and security services. 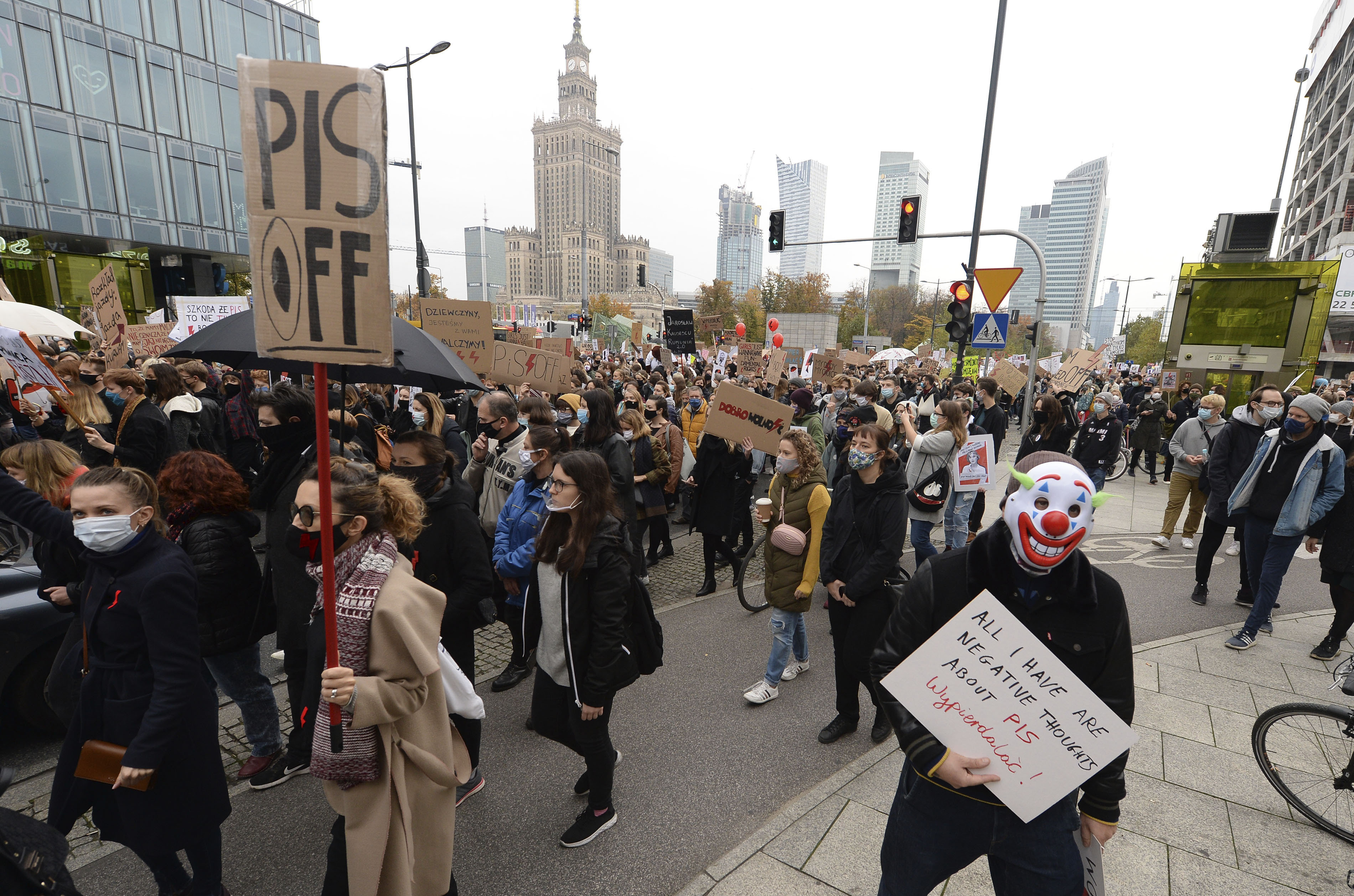 On Sunday, members of some far-right groups and soccer fans surrounded churches to defend them, in some cases provoking skirmishes with protesters and police.

Szymon Holownia, the founder of a new centrist political movement, said that Kaczynski, “in the name of defending the Church wants to set fire to the country and drown it in blood.”

The conservative rulers have sought to depict the huge crowds of mostly young people led by women’s rights activists as “fascists.”

Interior Minister Mariusz Kaminski on Wednesday vowed “decisive action” by the police “in the face of further attempts of similar acts of aggression and desecration announced by the leaders and organizers of the protests.”

He said 76 people have been detained in connection with the protests at churches, and prosecutors are carrying out proceedings in 101 cases.

People have been taking to the streets in massive numbers even as the coronavirus spreads fast, with a record 18,820 new cases and 236 new deaths over the past day.

Kaczynski accused the protesters of risking the lives of many people by gathering during the pandemic.

Polish President Andrzej Duda, who is in isolation after testing positive for COVID-19, said last week that he supported the court ruling, his daughter Kinga Duda, appointed as an unpaid advisor to her father on social issues, said Wednesday that she could not accept the constitutional court’s ruling.

Kinga Duda said that any woman carrying a fetus that is could die within moments of birth should be allowed to decide what to do since she will be the one “to face the consequences of her decision for the rest of her life.”

Meanwhile, social tensions are also rising with ongoing protests by farmers, who are angry about the government’s proposal of a new animal welfare bill that they say will harm them economically.