Cecilia Chiang, whose San Francisco restaurant, the Mandarin, introduced American diners in the 1960s to the richness and variety of authentic Chinese cuisine, died on Wednesday at her home in San Francisco. She was 100.

Ms. Chiang came to the United States from China as a daughter of wealth who had fled the Japanese during World War II, traveling nearly 700 miles on foot. Once in San Francisco, she proceeded, largely by happenstance and almost single-handedly, to bring Chinese cuisine from the chop suey and chow mein era into the more refined one of today, enticing diners with the dishes she ate growing up in her family’s converted Ming-era palace in Beijing.

This was traditional Mandarin cooking, a catchall term for the dining style of the well-to-do in Beijing, where family chefs prepared local dishes as well as regional specialties from Sichuan, Shanghai and Canton.

In a profile of Ms. Chiang in 2007, The San Francisco Chronicle wrote that her restaurant “defined upscale Chinese dining, introducing customers to Sichuan dishes like kung pao chicken and twice-cooked pork, and to refined preparations like minced squab in lettuce cups; tea-smoked duck; and beggar’s chicken, a whole bird stuffed with dried mushrooms, water chestnuts and ham and baked in clay.” 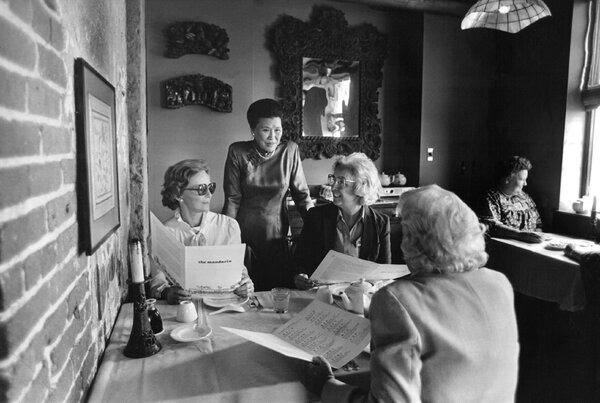 The restaurant became a shrine for such food-world luminaries as James Beard, Marion Cunningham and Alice Waters, who said that Ms. Chiang had done for Chinese cuisine what Julia Child had done for the cooking of France.

That sentiment was echoed by the food magazine Saveur in 2000, when it wrote that the Mandarin had “accomplished nothing less than introducing regional Chinese cooking to America.”

Like Mrs. Child, Ms. Chiang was not a chef, nor was she a likely candidate to run a restaurant. She was born Sun Yun near Shanghai in 1920 — the precise date is unclear — the seventh daughter in a family of nine girls and three boys. Her father, Sun Long Guang, was a French-educated railway engineer who retired at 50 to pursue reading and gardening. Her mother, Sun Shueh Yun Hui, came from a wealthy family that owned textile and flour mills. After her parents died, Sun Yun managed the businesses’ finances while still in her teens.

The Ming-era palace in which she grew up occupied an entire block in Beijing, where the Chiangs moved in the mid-1920s. Children were not allowed in the kitchen, but she paid close attention on trips to the food markets with her mother and listened carefully as detailed instructions were issued to the cooks.

After the Japanese occupied Beijing in 1939, the family’s fortunes became precarious. In early 1943, Cecilia, as she was called by her teachers at the Roman Catholic Fu Jen University, left to join relatives in Chongqing.

In her long journey, much of it by walking, she survived on a few gold coins sewed into her clothes, her only assets after Japanese soldiers had stolen her suitcase.

In Chongqing she found part-time work as a teacher of Mandarin at the American and Soviet embassies. She also met and married Chiang Liang, whom she had known as an economics professor at Fu Jen University and who was by then a tobacco company executive.

The couple moved to Shanghai after the war. In 1949, when Communist forces were poised to take over China, Mr. Chiang was offered a diplomatic post in Tokyo at the Nationalist Chinese Mission.

Two years after arriving in Tokyo, Ms. Chiang opened a Chinese restaurant there, the Forbidden City, with a group of friends. It was an instant success, attracting Chinese expatriates and Japanese diners as well.

Ms. Chiang sailed to San Francisco in 1960 to help her sister Sun, whose husband had just died. There she met two Chinese acquaintances from Tokyo, women who had recently emigrated to the United States and who wanted to open a restaurant. Ms. Chiang agreed to put up $10,000 as a deposit on a store they had found, on Polk Street, far from the city’s Chinatown.

When the two women backed out, Ms. Chiang found to her horror that the deposit was not refundable. She took a deep breath and decided to open the restaurant herself rather than tell her husband that she had lost the money.

“I began to think that if I could create a restaurant with Western-style service and ambience and the dishes that I was most familiar with — the delicious food of northern China — maybe my little restaurant would succeed,” she wrote in the second of her two cookbook memoirs, “The Seventh Daughter: My Culinary Journey from Beijing to San Francisco” (2007, written with Lisa Weiss). The first was “The Mandarin Way” (1974, with Allan Carr).

Through a newspaper ad, Ms. Chiang found two talented chefs, a married couple from Shandong, and in no time the restaurant was up and running. The early days were difficult. Local suppliers, who all spoke Cantonese, refused to deliver to the Mandarin and would not extend credit. The menu, with 200 dishes, was unmanageable. Ms. Chiang, short on help, scrubbed the kitchen floors herself.

But little by little, Chinese diners, and a few Americans, came regularly for hot and sour soup and pan-fried potstickers. One evening, Herb Caen, the popular columnist for The Chronicle, dined at the restaurant. In a subsequent column, he called it “a little hole-in-the wall” that was serving “some of the best Chinese food east of the Pacific.”

Overnight the tables filled. Lines formed outside the door. Mandarin was on its way. In 1968, Ms. Chiang moved the restaurant to larger quarters on Ghirardelli Square, where she could accommodate 300 diners and offer cooking classes.

In 1975 she opened a second Mandarin, in Beverly Hills, Calif. She sold it to her son, Philip, in 1989. He later helped create the P.F. Chang’s restaurant chain. He survives her, as do her daughter, May Ongbhaibulya; three granddaughters; and three great-grandchildren.

Ms. Chiang continued to work as a restaurant consultant into her 90s. The director Wayne Wang made a documentary about her, “Soul of a Banquet,” which was released in 2014, and in 2016 the San Diego PBS station KPBS broadcast a six-part series, “The Kitchen Wisdom of Cecilia Chiang.”

“I think I changed what average people know about Chinese food,” Mrs. Chiang told The Chronicle in 2007. “They didn’t know China was such a big country.”