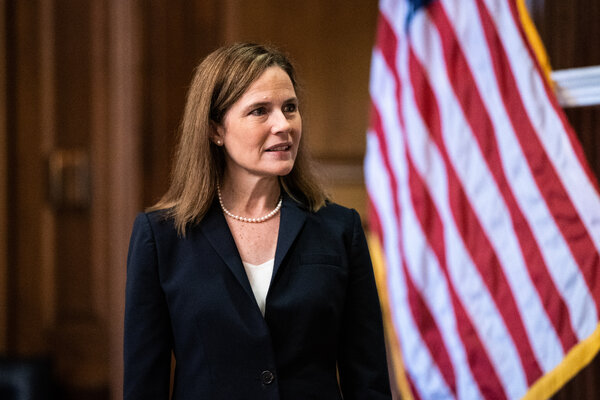 A divided Senate voted Monday night to confirm Judge Amy Coney Barrett to the Supreme Court, less than six weeks after the death of her predecessor, Justice Ruth Bader Ginsburg.

With an election looming in just eight days, Republicans overcame unanimous opposition by Democrats to make Judge Barrett the 115th justice of the Supreme Court and the fifth woman ever to sit on its bench. In a 52-to-48 vote, all but one Republican, Susan Collins of Maine, supported Judge Barrett. It was the first time in 151 years that a justice was confirmed without a single vote from the minority party.

Democrats: Leading Democrats called the confirmation vote a hypocritical power grab by Republicans, who they said should have waited for voters to have their say on Election Day — the stance Republicans had taken four years ago when they declined to hold hearings for one of former President Barack Obama’s nominees to the Supreme Court, Merrick Garland.

Republicans: Republicans said it was their right as the majority party to press ahead, and exulted in their victory, even as they stared down the potential loss of the White House and the Senate.

What’s next: Judge Barrett could begin work at the court as soon as Tuesday. Among the first issues she may face, according to The Times’s Adam Liptak, are cases from North Carolina, Pennsylvania and Wisconsin, all concerning deadlines for mail-in ballots.

When Belarusians first took to the streets by the hundreds of thousands in August, after President Aleksandr Lukashenko claimed a re-election victory that was widely seen as fraudulent, many predicted that it was only a matter of days or weeks until the longtime authoritarian leader stepped down.

Nearly three months on, despite having been beaten, jailed, pepper-sprayed, fined and exiled, tens of thousands of protesters continue to march every Sunday, chanting “Go away!” and waving the white-red-white flag of the opposition. “I get the feeling that we’ve entered some kind of tunnel,” said one demonstrator. “There is no way back. We keep going and going and going.”

On Monday, scattered groups of workers across the country answered the call for a general strike. They were joined by university students who walked out of their classes, on the heels of an opposition march in Minsk, the capital, on Sunday that drew more than 100,000 people.

Quote: “We are waiting, waiting, for, maybe, the regime to fall,” said Eduard Sventetsky, a strike leader. “It depends on the leaders sitting in the Kremlin in Moscow.”

In nearly every European country, the number of coronavirus cases is increasing at an alarming pace.

In the past seven days, Britain recorded 151,391 new cases, Germany reported 71,567 new cases, and Belgium saw an increase of 83,156 cases, according to a New York Times database. Chancellor Angela Merkel of Germany will meet with her governors at the end of the week to assess whether the country will impose new rules.

In France, the situation is “difficult, not to say critical,” according to Jean François Delfraissy, the immunologist who leads the scientific council that advises the government on the pandemic. The country recorded 52,010 new cases on Sunday alone — a figure that officials say may be half the actual total.

Spain and Italy both extended restrictions this past weekend to avoid second lockdowns; Spain entered a new state of emergency, and Italy again tightened limits on bars, restaurants and gyms.

About 2,000 protesters gathered in Berlin on Sunday to demonstrate against rules imposed by the government to keep infections at bay.

Melbourne, Australia, will end a strict lockdown of more than three months, officials announced on Monday, after the city recorded no new coronavirus cases for the first time since June.

If you have 10 minutes, this is worth it

It was a story that the White House hoped would upend the presidential race: that Joe Biden, the former vice president, had been aware of, and profited from, his son’s business activities in Ukraine. But attempts by members of President Trump’s re-election campaign to place the story in The Wall Street Journal failed, and the story failed to gain as much traction as the campaign had hoped.

Our media columnist wrote about the White House’s secret, last-ditch effort to change the narrative, and the election.

Ant Group: The Chinese financial technology titan is set to raise about $34 billion when its shares begin trading in Hong Kong and Shanghai in the coming weeks, which would make its initial public offering the largest on record.

Climate change: Prime Minister Yoshihide Suga of Japan laid out an ambitious climate goal of carbon neutrality for the country by 2050. Japan is the world’s fifth-largest emitter of greenhouse gases.

Snapshot: Scientists found new evidence of small deposits of water and ice across the moon’s surface, a potential resource for future visiting astronauts, above. “Anytime we don’t need to pack water for our trip, we have an opportunity to take other useful items with us,” one NASA scientist told The Times.

Lives Lived: The Korean businessman Lee Kun-hee, who built Samsung into a global giant but was twice convicted (and twice pardoned) for white-collar crimes committed along the way, died at 78 on Sunday in Seoul.

What we’re reading: This article in the magazine High Country News about pandemic struggles in Las Vegas, which has one of the largest U.S. school districts. “This just felt so stark to me — schools aren’t open, but slot machines are?” said Amelia Nierenberg, who writes the Coronavirus Schools Briefing.

Cook: Crisp at the edges, soft at the center, these irresistible Korean scallion pancakes with vegetables make for a quick dinner that you can throw together on any weeknight.

Do: Anyone can experience screen fatigue, whatever your age. Here are some tips to help you practice digital wellness.

Make the most of your time indoors: At Home has our full collection of ideas on what to read, cook, watch and do while staying safe at home.

With a week to go before Election Day in the U.S., we take a look at the Electoral College and its role in determining the winner of the presidency.

Many people, including some Americans, are under the assumption that citizens’ votes alone determine the next president. They do not. That responsibility falls to the Electoral College: When Americans cast their ballots, they are actually voting for a slate of electors chosen by their state’s political parties who have pledged to support that party’s candidate. (They don’t always do so.)

The party that wins a state typically receives all of its electoral votes. Most states have clear majorities, either for Democrats or Republicans. But in swing states, the race is close enough that both candidates have a shot at winning.

Sometimes, because states with smaller populations are overrepresented in the Electoral College, a candidate can win the popular vote but lose the election. This occurred in 2016, when Hillary Clinton won the popular vote by more than three million votes, as well as in a few other elections in U.S. history.

For years there have been debates about abolishing the system to allow the popular vote to determine the winner. But the issue faces a partisan divide, because Republicans benefit from the electoral clout of less populous, rural states.

Thanks for joining me for this briefing. See you next time.

Thank you
To Theodore Kim and Jahaan Singh for the break from the news. Will Dudding wrote today’s Back Story. You can reach the team at briefing@nytimes.com.

P.S.
• We’re listening to “The Daily.” Our latest episode is about white suburban women who voted for Donald Trump in the 2016 election and now might switch sides.
• Here’s our Mini Crossword, and a clue: “Proverbial breaker of the camel’s back” (five letters). You can find all our puzzles here.
• Remember the Great Sneaker Spill of 1990? To commemorate the event, in which more than 61,000 Nike sneakers fell into the Pacific Ocean, a Washington, D.C., artist has created a display of 250 replicas of the shoes, on view here.
• The Times won six Lowell Thomas Travel Journalism awards from the Society of American Travel Writers.