Amy Coney Barrett was confirmed as the next Supreme Court justice only eight days before a presidential election. 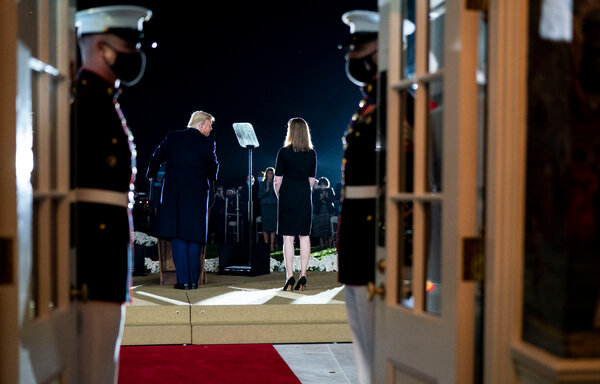 WASHINGTON — President Trump, who loves to boast of doing anything his predecessors have never done, pulled off such a historic first on Monday. He won confirmation of a Supreme Court justice only eight days before a presidential election, rushing his choice through the Senate before voters decide whether to give him four more years or kick him out of office.

Mr. Trump then did something else no other president has done. He hosted a nighttime ceremony on the White House lawn to swear in Justice Amy Coney Barrett in a virtual do-over of the superspreader event blamed for infecting multiple people with the coronavirus a month ago to the day, including the president himself, who was forced to spend three nights in the hospital.

To Mr. Trump, the first history-maker outweighed the second, a chance to celebrate a landmark political victory regardless of the risk. It was, in effect, the triumph of defiance over experience, a stubborn gesture by a president who refuses to acknowledge the continuing threat of a pandemic that has killed more than 225,000 people in the United States even after it has swept through his own circle of aides, advisers and allies. Undaunted and unbowed, Mr. Trump hosted the event even as five people working for Vice President Mike Pence have tested positive in recent days.

This time, at least, the White House made some concessions to the virus. Unlike the Rose Garden event on Sept. 26 when Mr. Trump announced his nomination of Justice Barrett, apparently leading to a raft of infections, the ceremony on Monday night marking her confirmation was held on the roomier South Lawn, with folding chairs seated several feet apart and guests required to wear masks.

Neither Mr. Trump nor Justice Barrett wore masks, perhaps owing to the fact that both have already had the virus and therefore presumably could be immune. Melania Trump, the first lady, who also was infected after the last event, likewise attended without a mask. Justice Clarence Thomas, who was on hand to swear in his new colleague, wore no mask either, even though he is not known to have been previously infected. None of the other seven justices attended. 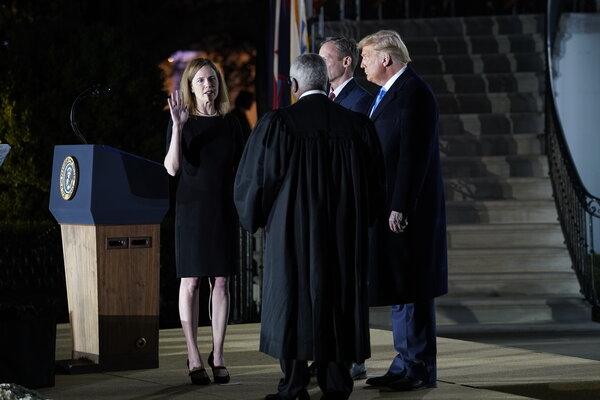 Neither the president nor the new justice made any reference to the virus or what happened the last time the two gathered supporters at the White House. Instead, they congratulated themselves on the superquick confirmation process that has now put her on the court just in time to rule on any of Mr. Trump’s challenges emerging from next week’s election.