LOS ANGELES — There’s more than one way to laminate paratha-style roti, to fill the dough with fine layers of fat and bring the bread to life.

At Bridgetown Roti, Rashida Holmes paints each round with butter, rolls it into a twist, and coils that twist into a spiral. Rolled flat a second time, the butter is dispersed, so when it’s cooked on the griddle, the roti becomes tender and airy in places, almost puffy, but crisp and flaky in others.

In the driver’s seat of my car, in a friend’s front yard or sitting on the floor of my living room, I have finished the entirety of this juicy, filled roti, crumpled up the wrapper and immediately thought about when I might eat it again, the scent of oxtail curry still on my fingers.

Ms. Holmes, 33, runs her pop-up on the weekends out of a shared kitchen in Downtown Los Angeles. Her mother, who was born in Barbados and immigrated to New York City as a teenager, taught Ms. Holmes her family’s style of Barbadian chicken curry. And the cod cakes on the menu, with their crisp shells covered in a mellow garlic aioli and a mat of chives, are based on her aunt’s recipe. 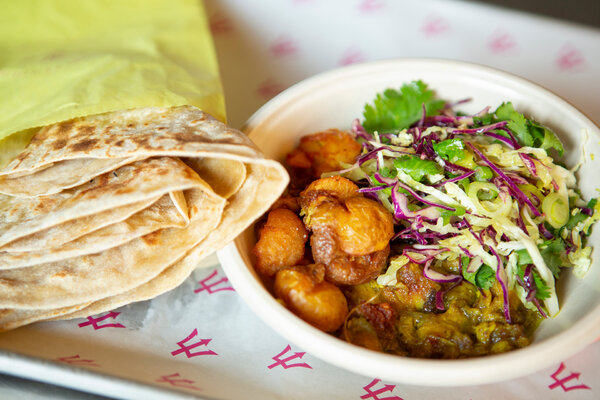 Though the food from Bridgetown is reminiscent of the home cooking that inspired it, it’s also decidedly cheffy, full of tiny surprises that intensify the deliciousness of a dish without calling any attention to themselves — the fried okra chips, with their lovely, almost sticky chew; the flashes of acidity and the crunch of fresh pickles; the fruity, homemade hot sauces.

Ms. Holmes was formerly a sous-chef at the eclectic, vegetable-obsessed restaurant Botanica in Silver Lake, in northeast Los Angeles, and had planned to go back to Barbados this year to spend time with family, both in the kitchen and out. She gave up on the idea when travel became risky and, instead, stayed put in Los Angeles. She cooked from memory.

“It was my Covid solution,” she said in a recent phone interview.

It’s a welcome one in Los Angeles, where the full expanse of West Indian food can be hard to find, particularly Bajan cuisine (though there are a few small businesses like Caribbean Gourmet, run by the chef Yonette Alleyne, which offers jerk, pine tarts and both Guyanese- and Jamaican-style patties).

When she was about 10, Ms. Holmes went on a trip to Barbados to visit relatives and ate roti from a street vendor, who filled the bread with chicken thighs on the bone. The dish, like so much of the Bajan food she’d tasted, is at the core of her food memories, although it had never occurred to her before to cook it professionally.

Ms. Holmes started very small, at home, in April, with about 50 patties, the tender, half-moon pastries tinted yellow with turmeric. Some were filled with oxtail, others with shrimp in green curry. It was pea season, so she filled some vegan patties with a mixture of potatoes and fresh English peas.

She sold out within an hour of posting the details on Instagram, so she made more the next week, and even more the next, until it became clear her home kitchen couldn’t keep up with the city’s appetite for the deep comfort of Bajan patties.

Now, in a commissary kitchen, with a team of two other cooks, Ms. Holmes has access to a walk-in refrigerator and freezer, and storage space.

She uses an industrial sheeter — the same kind typically used by pastry chefs to make croissant dough in bulk — to roll roti quickly and evenly. She buys whole goats from Jimenez Family Farm, in the Santa Ynez Valley, and butchers them herself, cooking every part of the animal, and picking the sticky meat from the head.

Her menu has grown, and next week, Ms. Holmes will make doubles, her version of the fried bara bread piled with goat meat and locally grown chickpeas. And as squash comes into season, the patties will change.

“We’re playing it month to month, just seeing how it goes,” Ms. Holmes said. “We’re going to start doing more pop-ups, and expanding to other parts of L.A., but beyond that I don’t know.”

The only problem with Ms. Holmes’s roti will present itself if you’re foolish enough to not eat it. Left to cool, the bread hardens. The roll’s soft edges square up and solidify. So much is out of your control right now, but not this.

If you’re traveling, if you know that dinner will be sitting in your car, or on the counter, for a long time, then plan to warm the roti up properly, with the respect they deserve. Yes, I consulted Ms. Holmes on this important matter. Her solution is to wrap the roti, first in damp paper towels, then in aluminum foil, and pop them into a hot oven to warm through.

Another solution — which I’ve found to be pretty foolproof — is to eat the roti the second you pick it up, in a strip of shade against some unmarked brick building on Santa Fe Avenue, before you even get to the car.