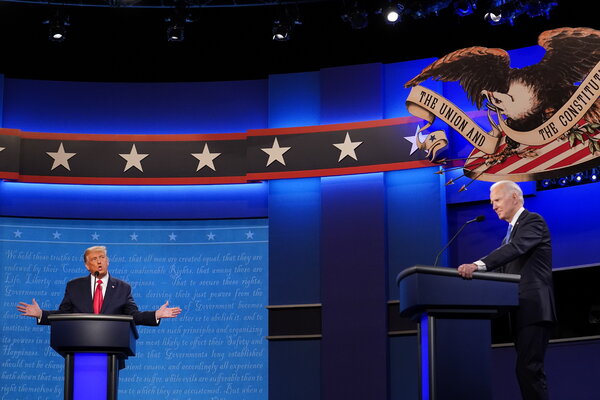 By Alexander Burns and Jonathan Martin

President Trump and Joseph R. Biden Jr. delivered starkly divergent closing arguments to the country in the final presidential debate on Thursday, offering opposite prognoses for the coronavirus pandemic and airing irreconcilable differences on subjects from rescuing the economy and bolstering the health care system to fighting climate change and reshaping the immigration system.

The debate was, on the whole, a more restrained affair than the first encounter between the two candidates last month, when Mr. Trump harangued Mr. Biden for most of an hour and a half and effectively short-circuited any policy debate. But if the tenor of Thursday’s forum was more sedate, the conflict in matters of substance and vision could not have been more dramatic.

From the opening minutes, the two candidates took opposing stances on the pandemic, with Mr. Trump promising, in defiance of evidence, that the disease was “going away” while Mr. Biden called for much more aggressive federal action in a “dark winter” ahead.

Mr. Trump, who badgered Mr. Biden with increasing aggression over the course of the debate, appeared determined to cast his opponent as a career politician who was, as he jabbed toward the end of the debate, “all talk and no action.” And the president used the event as his most prominent platform yet for airing unsubstantiated or baseless attacks about the finances of Mr. Biden and members of his family.

Mr. Trump, however, did little to lay out an affirmative case for his own re-election, or to explain in clear terms what he would hope to do with another four years in the White House. He frequently misrepresented the facts of his own record, and Mr. Biden’s. And on his most important political vulnerability — his mismanagement of the pandemic — Mr. Trump hewed unswervingly to a message that happy days are nearly here again, even as polls show that a majority of voters believe the worst of the coronavirus crisis is still ahead.

Trailing in a series of crucial swing states, and with 48 million Americans having already voted, the president was under more pressure. But while he proved he can engage in a more conventional political jousting, it was less clear whether his performance could prompt people who dislike him to reconsider their well-ingrained perceptions.

Mr. Biden, for his part, stuck to the core of the argument that has propelled his campaign from the start, denouncing Mr. Trump as a divisive and unethical leader who had botched the federal response to a devastating public-health crisis. Though Mr. Trump pushed him onto the defensive repeatedly, the former vice president also laid out a fuller version of his own policy agenda than he managed in the first debate, calling for large-scale economic stimulus spending, new aid to states battling the pandemic and a muscular expansion of health care and worker benefits nationwide.

Of all the disagreements between the two candidates, none blazed more brightly than their assessments of the American experience battling the coronavirus.

Prompted by the moderator, Kristen Welker of NBC News, to explain his plan for the coming months, Mr. Trump stuck to the sunny message he has delivered at recent campaign rallies, promising a vaccine in short order and citing his own recovery from a bout with the virus as an example of medical progress. The president boasted that he was now “immune” to the disease, and insisted that states like Texas and Florida had seen the virus fade away, even as case counts are on the rise across the country.

“I’ve been congratulated by the heads of many countries on what we’ve been able to do,” Mr. Trump said, without offering any specifics.

Mr. Biden, in response, pressed a focused and familiar line of attack against the president, faulting him for doing “virtually nothing” to head off the pandemic early this year and heading into the coldest part of the year with no defined plan to control the virus. Holding up a face mask, Mr. Biden said he would encourage all Americans to don them and would ramp up rapid testing on a national scale. 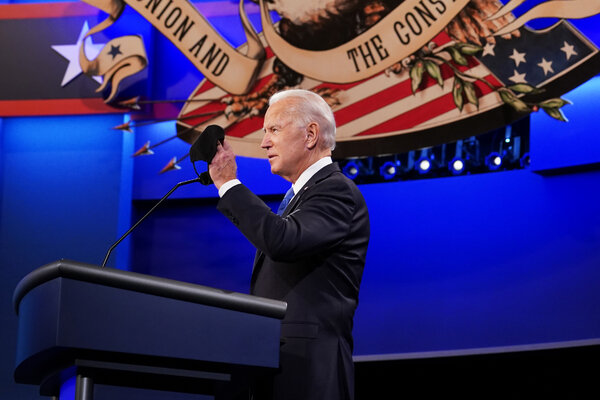 The president did, however, say for the first time, “I take full responsibility” for the impact of the virus. Then he quickly sought to skirt blame. “It’s not my fault that it came here — it’s China’s fault,” he said.

“Anyone who’s responsible for that many deaths should not remain as president of the United States of America,” Mr. Biden said, adding, “I will end this. I will make sure we have a plan.”

The debate on Thursday, at Belmont University in Nashville, represented perhaps the last opportunity for Mr. Trump to shake up the presidential campaign and claw his way into closer contention against Mr. Biden with just 11 days remaining.

Mr. Trump was more coherent than in the first debate, getting off a series of attack lines depicting Mr. Biden as a career politician and avoiding harsh personal critiques of his children, but he offered little rationale for why voters should grant him a second term.

With the candidates’ microphones turned off at times while the other was speaking, a new rule implemented to avoid a repeat of Mr. Trump’s constant interruptions in the first debate, their facial expressions often did the talking. When Mr. Biden said Rudolph W. Giuliani, Mr. Trump’s lawyer, was being “used as a Russian pawn,” the president gaped and jarred his head to the right. And when Mr. Trump insisted, not for the first time, that he would release his tax returns after an I.R.S. audit, Mr. Biden let out a wide, here-we-go-again grin.

It was in the second segment of the debate that the exchanges turned sharply personal, as the focus shifted to foreign interference in American elections. Mr. Biden spoke first, warning that countries like Russia and Iran would “pay a price” for tampering with the campaign. Alluding to unsubstantiated stories about him that have circulated in conservative media, Mr. Biden chided Mr. Trump for the actions of “his buddy Rudy Giuliani.”

Mr. Trump rapidly escalated matters, brandishing the unproven allegations about Mr. Biden’s son to accuse his rival of personally taking money from foreign interests. “They were paying you a lot of money and they probably still are,” Mr. Trump said, leveling a charge for which no evidence has surfaced. An investigation by Senate Republicans found no evidence that Mr. Biden, the former vice president, engaged in wrongdoing over his son’s business dealings.

Mr. Biden rejected the charge, saying he had “not taken a penny from any foreign source ever in my life.” Pushing back on the president, he cited a New York Times report that Mr. Trump maintained a Chinese bank account and challenged the president to release his tax returns. “Release your tax returns,” Mr. Biden said, “or stop talking about corruption.”

The extended back-and-forth was the most prominent airing so far of the negative message that Mr. Trump clearly sees as his best chance of undermining Mr. Biden in the final days of the presidential campaign. But the clash did not yield the kind of explosive confrontation that strategists on both sides had anticipated, and in some cases feared.

As Mr. Trump peppered Mr. Biden with exaggerated or baseless charges, Mr. Biden repeatedly countered, “Not true,” sometimes without elaboration, and the segment took on a kind of flat and circular shape.

After the protracted back-and-forth, Mr. Biden sought to pivot with a rehearsed line in which he looked at the camera and said: “It’s not about his family and my family. It’s about your family.”