In 1988, James A. Johnson, a Democratic operative, was helping Senator Lloyd Bentsen, the Democratic vice-presidential nominee, prepare for his debate with Senator Dan Quayle, his Republican opponent. In reviewing the research, Mr. Johnson noticed that Mr. Quayle frequently compared himself to John F. Kennedy and told Mr. Bentsen and his team to expect him to do so at the debate.

When Mr. Quayle said onstage that he had as much experience in Congress as Kennedy had when he sought the presidency, Mr. Bentsen pounced. “You’re no Jack Kennedy,” he said in a devastating riposte that remains one of the most memorable debate moments in American political history.

“Jim Johnson was clearly the reason the senator was prepared for that exchange,” Jack Martin, a longtime Bentsen aide who was in the room at the time, said in an interview.

A pillar of the Washington establishment, Mr. Johnson would parlay his extensive political skills into a second career in finance and emerge as a major power broker who simultaneously led three prominent institutions: Fannie Mae, the Kennedy Center and the Brookings Institution.

Mr. Johnson died on Sunday at his home in Washington. He was 76. His son, Alfred, said the cause was complications of a neurological disease.

Mr. Johnson was so well connected and held so many powerful posts that Harold M. Ickes, also a Democratic operative and President Bill Clinton’s deputy chief of staff, told The Washington Post in 1998 that he was “the chairman of the universe.”

Even Mr. Johnson had a hard time describing what he did for a living. When people would ask, he said in a 2016 oral history, he would say, “I do some kind of combination of public policy, politics, government, philanthropy and business.” 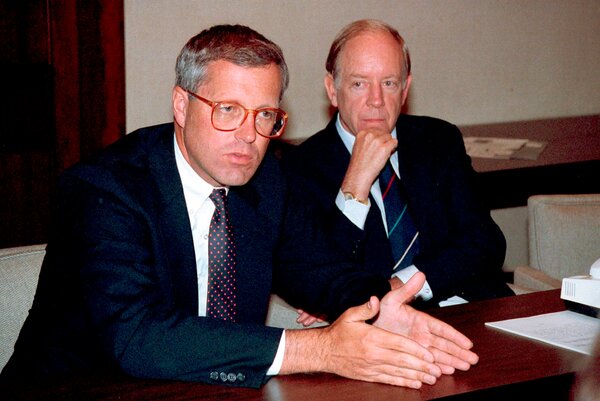 At another juncture, he explained his work this way: “I talk.” But never out of school. In 2004, as he declined to divulge details of the vice-presidential search he was leading for Senator John Kerry, he told The New York Times, “I would discreetly characterize myself as discreet.”

As chairman and chief executive, he led Fannie Mae to record profits; its net income more than tripled to $3.91 billion in 1999, the year after he retired. Mr. Johnson made an estimated $100 million himself in eight years with the company.

He proved an aggressive lobbyist for Fannie Mae — making strategic financial donations to congressional regulators, hiring former public officials from both parties and paying for academic studies that blunted criticism of some of the company’s riskier financial practices. He was long gone before the subprime mortgage crisis hit, but he was faulted for encouraging practices that contributed to the 2008 housing meltdown.

Mr. Johnson was the “anonymous architect of the public-private homeownership drive that almost destroyed the economy in 2008,” Gretchen Morgenson, then a business journalist at The New York Times, and Joshua Rosner, a financial analyst, wrote in “Reckless Endangerment” (2011), which explored the origins of the financial crisis.

“He was especially adept at manipulating lawmakers, eviscerating regulators and leaving taxpayers with the bill,” they added.

In the 2016 oral history, Mr. Johnson skirted the controversies of his tenure at Fannie Mae. Instead he focused on the company’s goals of helping low-income families, immigrants and young people obtain mortgages and own their own homes, which he said was part of the American dream.

Indeed, throughout his career he supported racial and economic equality, starting with his participation in the 1965 civil rights march from Selma to Montgomery, Ala., while he was in college.

Later, when he was chairman of the John F. Kennedy Center for the Performing Arts, he and his wife at the time, Maxine Isaacs, created and underwrote the Millennium Stage, which provides free concerts and other performances 365 days a year, making the elite Kennedy Center more accessible.

And as chairman of the Brookings Institution, a liberal research group, he recruited scholars, writers and thinkers to study demographic trends in urban areas and the intersection of race and public policy. With funding from the Fannie Mae Foundation, he started the institution’s Center on Urban and Metropolitan Policy, now the Metropolitan Policy Program.

James Arthur Johnson was born on Dec. 24, 1943, in Benson, Minn., a small town along the Chippewa River where his Norwegian grandparents had settled. Within two blocks, there were 14 houses filled with his aunts, uncles and cousins.

His mother, Adeline (Rasmussen) Johnson, taught Latin and German at the local high school. His father, Alfred Ingvald Johnson, owned a grocery store and was a real estate broker. A member of the Democratic-Farmer-Labor Party, he was elected to the state legislature and became speaker of the House in the late 1950s.

Jim attended the University of Minnesota, where he was elected student body president in his sophomore year. He graduated in 1966 with a degree in political science.

After earning his master’s degree in public policy at Princeton in 1968, he signed on with Eugene J. McCarthy’s antiwar presidential campaign. He would go on to work for several Democratic presidential hopefuls over the next four decades, including Edmund Muskie, George McGovern, Walter Mondale, Al Gore and Senator Kerry.

None became president, but Mr. Johnson maintained a reputation as a pragmatic, shrewd and trusted insider.

“He and I both were from Minnesota,” Mr. Mondale recalled in an interview, “and we spoke the same language.”

Mr. Johnson returned to politics to manage Mr. Mondale’s ill-fated campaign for president in 1984. Mr. Mondale said in the interview that his landslide loss of 49 states to President Ronald Reagan was no reflection on Mr. Johnson. “I wasn’t a very good candidate,” he said.

Mr. Johnson and Mr. Holbrooke sold Public Strategies in 1985 to Shearson Lehman Brothers, where they both became managing directors in the investment banking division. Mr. Johnson left in 1990 to join Fannie Mae as vice chairman; he became chairman and chief executive in 1991.

He stayed out of presidential politics while at Fannie Mae. After leaving, he returned for sensitive tasks, helping Democratic candidates with their vice-presidential selection, debate negotiations and transition planning.

He briefly led the vice-presidential selection process for Senator Barack Obama in 2008, but he stepped down following a Wall Street Journal report that he had received preferential loan rates from Countrywide Financial, the mortgage company at the center of the subprime lending crisis.

In addition to his son, Mr. Johnson is survived by his wife, Heather Muir Kirby, a managing director at Deutsche Bank; a sister, Marilyn LaMourea; and a grandson. His marriages to Katherine Marshall and Ms. Isaacs ended in divorce.

After leaving Fannie Mae, Mr. Johnson joined the boards of several companies, including Goldman Sachs and Target. Since 2011, he had been chairman of the advisory council of the Stanford Center on Longevity, which seeks to implement technological advances to help older people live healthy and rewarding lives.