Cengiz and a rights group founded by Khashoggi before his death filed the lawsuit on Tuesday in a Washington, DC District Court against MBS and more than two dozen other top Saudi officials, seeking damages for his killing in Istanbul in 2018.

It alleges that Khashoggi was the victim of a ruse that began in Riyadh’s US embassy when he went there to secure documents to marry Cengiz.

The lawsuit claims the “plan to permanently silence Mr Khashoggi by murdering him was put in motion no later than the summer of 2018” by MBS and other Saudi officials named in the document.

The plan was crafted after the defendants allegedly learned of Khashoggi’s plans to use Democracy for the Arab World Now (DAWN), the rights group he founded, “as a platform to espouse democratic reform and promote human rights”, the suit continues.

It accuses MBS and Saudi officials of having “manufactured an opportunity to murder him” in which Saudi officials in the Washington Embassy told Khashoggi he could not receive the documents in the US, and would instead have to travel to Istanbul to get them at the Saudi consulate there.

Khashoggi was ultimately killed in the consulate in Istanbul in October 2018, and his remains have not been found.

Saudi Arabia acknowledges its agents killed Khashoggi but blames it on a botched rendition operation that was executed without MBS’s consent, an explanation excoriated by critics who doubt the killing could have been conducted without the direct knowledge and consent of MBS, the kingdom’s de facto ruler. 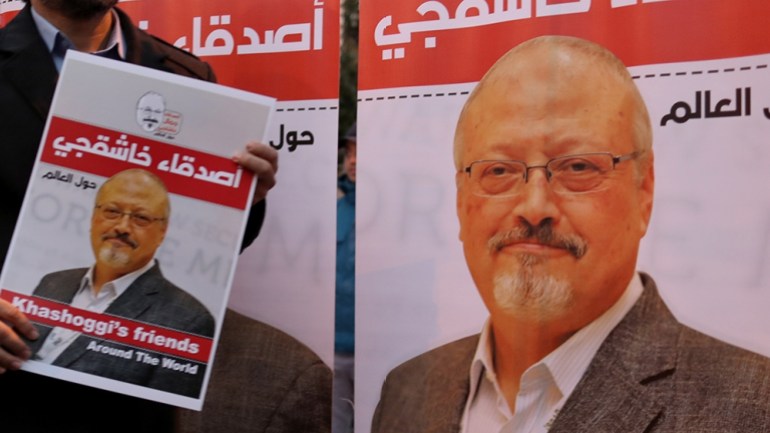 A man holds a picture of Jamal Khashoggi during a protest in front of the Saudi Arabian consulate in Istanbul, Turkey, in 2018 [Erdem Sahin/EPA-EFE]The CIA, the US international intelligence service, concluded that MBS directed Khashoggi’s murder, according to reports from the Washington Post, New York Times and BBC.

The lawsuit filed by Cengiz and DAWN seeks significant monetary damages, which it says should be determined by a trial jury.

“I am hopeful that we can achieve truth and justice for Jamal through this lawsuit,” Cengiz said in a statement. “I place my trust in the American civil justice system to give voice to what happened and hold those who did this accountable for their actions.”