Harissa and lamb, pork and fennel, and vegan mushroom with leeks and farro make sophisticated fillings for the humble Australian sausage roll. 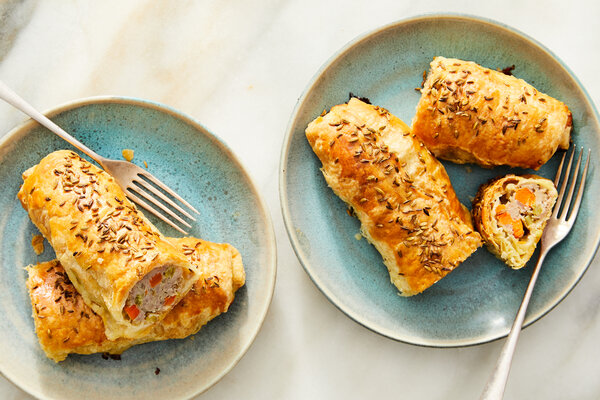 Warm and flaky sausage rolls, stuffed with savory meat and striped with ketchup, may not have been school cafeteria fare in Brooklyn while I was growing up. But they were in Australia for Paul Allam, where, as a kid, he used to long for one to appear at his primary school lunch table, tucked into a crumpled brown paper bag, steaming and a little soggy in the best possible way.

Now, as a professional baker and an owner of Bourke Street Bakery, Mr. Allam’s goal has been to tweak the humble sausage roll into something reflecting his adult sensibilities, using better ingredients and more sophisticated flavor combinations. At the Manhattan outpost of his Sydney-based bakery group, he offers a heady fennel-scented pork roll, a mellow turkey-cranberry roll and a rotating selection of vegetable rolls, filled with the likes of eggplant with chiles or spinach with feta.

But it was the harissa-tinged lamb version, laced with a smattering of currants and almonds, that I fell head over heels for. So much so that when I put subway rides on a pandemic-temporary hold, I called Mr. Allam for the recipe. 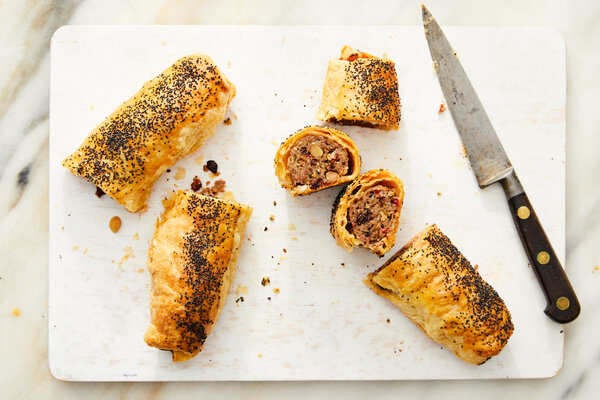 He was happy to oblige — with the caveat that his sausage rolls were a bit of a departure from the ones found in school cafeterias, not to mention in petrol stations throughout Australia.

“The traditional sausage rolls you got at school were made from cartilage, and the stuff they swept up from the floor,” he told me, possibly joking. “If you went to a bourgeoise school maybe you got celery. It didn’t matter, it still tasted great.

“Food memories from childhood are very strong, they stay with you,” he added.

I understood perfectly, I told him, remembering my beloved elementary school egg salad sandwiches … and, you know, Proust’s madeleines.

Before we even hung up the phone, my inbox pinged. Mr. Allam had sent the lamb roll recipe, along with another for the pork fennel rolls, which, he noted, ran neck and neck in popularity with the lamb version. Maybe I’d want to try them both?

Being fairly new to the world of sausage rolls, I was happy to explore. In the end I still like the lamb, with its mix of heat and sweetness, best. But the brawny pork rolls were also delicious, infused with anise-flavored fennel, garlic and thyme.

Although Mr. Allam said I could use flaky pie dough if I wanted, puff pastry is the classic sausage roll crust. Naturally, Mr. Allam makes his own with loads of good butter. And he is also working on a vegan version using plant-based butter.

I substituted a good, all-butter brand of frozen puff pastry, and the rolls baked up beautifully bronzed and airy. But feel free to use your favorite pie dough recipe here instead. Or, if you’re in the mood for a challenge, homemade puff pastry would be the sausage roll pinnacle.

As for the filling, you could also substitute other ground meats like turkey or chicken, for the lamb or the pork.

Not wanting to stop with just meat, I experimented with several vegetarian versions, too. My favorite combined sautéed mushrooms and leeks with chewy farro to thicken the mix and almond butter to make it creamy. Even better, you can turn this vegan by using pastry made with plant-based butter (Pepperidge Farm makes a widely available one).

Although Mr. Allam swears that ketchup (called tomato sauce in Australia) is the ideal accompaniment for sausage rolls, I didn’t use it on any of them. Childhood food memories can only get you so far.