President Trump and Joe Biden will appear at separate, nationally televised events on Thursday night, with the president facing one of his final prime-time opportunities to change the race’s trajectory. 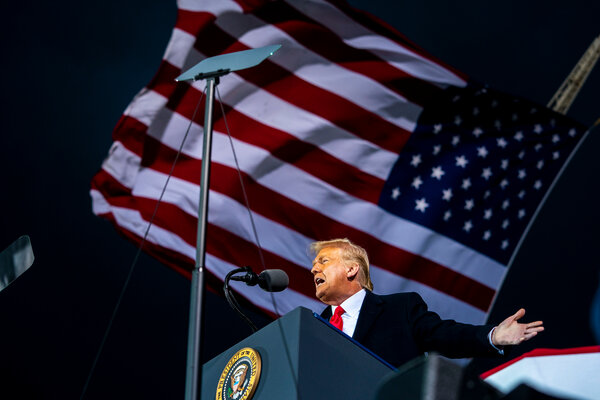 By Annie Karni and Thomas Kaplan

Mr. Trump will be taking questions from voters in Miami. NBC, MSNBC and CNBC will broadcast the town hall, which will be moderated by the “Today” show host Savannah Guthrie. It is expected to last for about an hour.

ABC will carry the Biden town hall, to be held at the National Constitution Center in Philadelphia and moderated by ABC News’s chief anchor, George Stephanopoulos. The event is expected to last 90 minutes.

Mr. Trump and Mr. Biden were originally scheduled to hold a debate on Thursday night, but it was canceled after the president bowed out because it was set to be held virtually.

Trump is behind, polls show. Will he start looking for a new target to blame?

A federal judge in Pennsylvania last week threw out a lawsuit by the Trump campaign that sought to limit how mail-in ballots can be collected and counted. Facebook and Twitter on Wednesday said they were limiting the distribution of, or simply blocking, a report in The New York Post that made unverified claims about Mr. Biden. The stimulus bill Mr. Trump is pushing for is at odds with both parties on Capitol Hill.

With under three weeks to go, Mr. Trump has a host of targets he can point to as he looks to explain why things aren’t going his way. Where he focuses his anger will also provide a preview of how he may react to the results on election night, if he loses.

Will Trump, once again, deliver Biden a gift by shouting?

The candidates won’t be sharing a stage, but their competing town halls, which will take place on different networks at the same time on the same night, could set up a similar dynamic to the first general election debate this month.

With a substantial lead in national and battleground state polls, Mr. Biden is just hoping to run out the clock without any outside events changing the trajectory of the race. Mr. Trump, who has packed his schedule with as many rallies as it can fit, is seeking to drown him out with noise.

Will Mr. Trump try to overshadow Mr. Biden with his outbursts and attacks, which have exhausted even some of his own supporters?

Will Trump try to steer the conversation to Hunter Biden?

The day before the town hall events, Republicans seized on the report in The New York Post about Mr. Biden and his son Hunter, which was so unsubstantiated that Twitter and Facebook took the extraordinary step of limiting access to it on their platforms.

The report, pushed by Republican allies of Mr. Trump, involved Hunter Biden’s work with a Ukraine energy company and whether he had sought his father’s help — the source of an ongoing baseless smear by the president against the Bidens. There is no evidence of wrongdoing by the former vice president, but Mr. Trump has been intent on creating distractions to keep voters from focusing on his failures in handling the coronavirus.