We’re covering new tiered virus restrictions for Britain, why the rollout of vaccines in the U.S. might be messy and the first potential millennial saint. 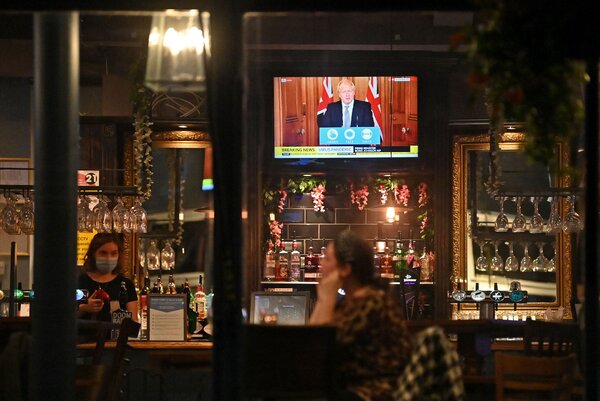 Prime Minister Boris Johnson of Britain on Monday ordered the closure of pubs and bars in Liverpool. The move angered local officials, who say they were cut out of the government’s deliberations, and laid bare how a second wave of infections is afflicting England’s north far more seriously than London or the rest of the south.

Mr. Johnson also announced a new three-tier system of restrictions, designed to simplify what had become a confusing patchwork of targeted lockdowns across Britain. While the first tier basically duplicates the country's most recent restrictions, the second tier bars people from different households from socializing together, and the third — the one just imposed in Liverpool — shutters pubs, gyms and other nonessential businesses. Schools and offices will remain open.

“We don’t want to go back to another national lockdown,” Mr. Johnson declared in Parliament. But with coronavirus cases rising rapidly and more people now hospitalized with the virus than in March, he said it was time for more draconian restrictions.

The Chinese city of Qingdao is testing all of its 9.5 million residents after it recorded China’s first locally transmitted cases of the virus in almost two months.

Iran announced its highest single-day death toll from the virus for the second day in a row, with 272 fatalities.

The U.S. may be within months of a turning point in its battle against the coronavirus: the first working vaccine.

But that stage of the fight may be more frustrating and drawn out than many hope, experts say. The first vaccines may provide only moderate protection — low enough to make it prudent to keep wearing a mask, with little to distinguish one vaccine from another. Some may eventually be withdrawn from the market.

Quotable: “It has not yet dawned on hardly anybody the amount of complexity and chaos and confusion that will happen in a few short months,” said Dr. Gregory Poland of the Mayo Clinic.

Related: A network of scientists is chasing the pandemic’s holy grail: an antibody that protects against not just the virus, but also related pathogens that may threaten humans.

Some optimism: Our infectious diseases reporter has been a self-described “gloomy Cassandra” since he began reporting on the crisis. But now he’s changing his tune slightly — based on vaccine progress, antibodies and expert predictions that the U.S. outbreak might be over by the middle of next year.

Sanctions for Lukashenko — with a way out

European Union foreign ministers agreed on Monday to impose sanctions on President Aleksandr Lukashenko of Belarus, who is widely seen as having stolen the recent election. But they also appeared to offer him a way out of the penalties, which have yet to go through legal vetting, if Mr. Lukashenko engages in serious talks with the opposition about new elections and eases his crackdown on protesters.

Mr. Lukashenko is already under sanctions from the U.S. and Britain, as well as from the Baltic nations. In response, Belarus has expelled several ambassadors of E.U. member states.

Some 40 Belarusian officials have already faced an asset freeze and a travel ban. After a violent confrontation with protesters in Belarus on Sunday, the E.U. foreign ministers, meeting in Luxembourg, agreed to expand the list of sanctioned officials to include the authoritarian president and others.

Just before the turn of the century, the twin brothers Luther and Johnny Htoo, then not even 10 years old, took command of a militia known as God’s Army on Thailand’s border with Myanmar. Their fighters, members of the Karen ethnic group, believed the boys could magically shield them from bullets.

Our Southeast Asia bureau chief followed up with the Htoo brothers two decades later. Having spent years as refugees, they live with the emotional wounds of war. And after trying to build new lives, they now find themselves confronting the trauma of exile. “I miss the jungle,” said Johnny, above, in his house in Thailand. “I miss where I grew up.”

British Airways: The carrier’s parent company, International Airlines Group, announced that its chief executive, Alex Cruz, would be stepping down immediately. He will be replaced by Sean Doyle, who runs Aer Lingus, an IAG airline based in Ireland.

Israeli immigration: The Israeli government approved an airlift of 2,000 Ethiopians of Jewish descent to Israel in the coming months, prompting angry reactions from Ethiopian Israeli activists who insist that about 8,000 should be resettled.

‘Patron saint of the internet’: Carlo Acutis, an Italian teenager who died of leukemia at 15 in 2006, may become the first millennial to be recognized as a saint in the Roman Catholic Church. He was beatified by the pope on Saturday.

Snapshot: Judge Amy Coney Barrett, with her family behind her, was sworn in for the first day of her Senate confirmation hearings in Washington on Monday. Democrats and Republicans offered differing portraits of President Trump’s Supreme Court nominee. Follow our live updates and learn about her record.

Lives lived: Sister Ardeth Platte, a Dominican nun and antinuclear activist who spent years behind bars for her beliefs, and who was the inspiration for a character on the Netflix series “Orange Is the New Black,” died last month at 84.

What we’re watching: This video of the American economist Paul Milgrom learning in the middle of the night that he had been awarded the Nobel Prize. His neighbor and fellow winner delivered the news — it’s pure joy.

Cook: This miso-sesame vinaigrette works with almost anything. Drizzle it on a simple salad with lettuce and fresh vegetables or over sliced leftover steak, chicken or tofu.

Watch: The Israeli thriller “Tehran” follows an Iranian-born, Israeli-raised spy sent back into Iran on a deep-cover mission to help coordinate an attack on Iran’s nuclear program. Our critic describes the series as “slick, wildly entertaining and packed with fantastical plot twists.”

Do: Drawing a favorite object can be a meaningful way to memorialize the story behind it, whether or not you think of yourself as a master draftsman. Here’s how to get started.

For more ideas on what to read, cook, watch and do, let our At Home collection keep you busy while staying safe at home.

A Nobel laureate on science and Covid-19

Jennifer Doudna, a professor at the University of California, Berkeley, shared this year’s Nobel Prize in Chemistry with Emmanuelle Charpentier, now the director of the Max Planck Unit for the Science of Pathogens in Berlin, for their work on the Crispr tool to edit DNA. It was the first time the award has gone to two women.

Dr. Doudna spoke to our California Today newsletter about her prize and her recent shift to coronavirus lab testing.

Can you explain in the simplest terms possible what you won for?

The simplest way to say that is that it’s for a technology for gene editing, which means, as I think the Nobel committee even worded it this way, changing the code of life. So it’s a way to alter DNA with precision and accuracy in cells to control cells’ fate. And even the properties of an entire organism.

Is there anything you would change about the way science is seen and understood in the world today?

I’d love to see science become more integrated into our daily conversations. We could be using different forms of media, whether it’s in cartoons or short videos, and more conversational use of language that isn’t exclusive — not using jargon.

One of the things that I’ve seen in my career is that there’s been an unfortunate change in the opposite direction where scientists are increasingly distrusted.

We see this news now, even during the pandemic. It’s quite frightening. It’s partly scientists’ fault. We need to be better at talking about our work in ways that are relatable by nonspecialists.

I know that your lab started doing coronavirus testing early on. How has that been going?

It seemed like something that we certainly had the technology and the know-how to do. Very quickly, at Berkeley, we set up a clinical testing lab in our Innovative Genomics Institute and started running tests with, initially, nasal swabs.

As the fall approached, it was clear that we would need to be helping the campus, as students started to arrive back. We knew that was a big motivator for getting our saliva tests going. Now, we’re serving students and the surrounding community with these tests.

That’s it for this briefing. And a correction: Because of a data collection error, Monday’s briefing misstated the period over which Germany reported more than 8,000 new daily cases. It was not a one-day total, but a two-day total.

Thank you
Theodore Kim and Jahaan Singh provided the break from the news. You can reach the team at briefing@nytimes.com.

P.S.
• We’re listening to “The Daily.” Our latest episode is about the fight over access to abortions in the U.S.
• Here’s our Mini Crossword, and a clue: “Plane seat choice” (five letters). You can find all our puzzles here.
• Join us in wishing Cronutt the sea lion an easy recovery: The 7-year-old “sweet boy” underwent groundbreaking brain surgery aimed at reversing the epilepsy he developed because of toxins in the water.
• The Times reporter Kenneth Vogel recently discussed with MSNBC the revelations from our investigations into President Trump’s tax records.