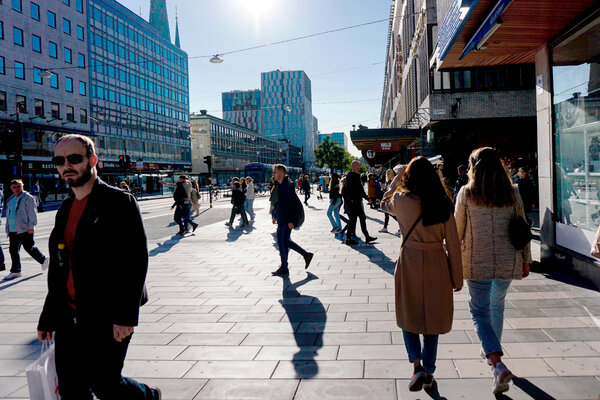 The White House event to celebrate Amy Coney Barrett’s Supreme Court nomination — a gathering that appears to have spread the coronavirus — would have violated the law in Sweden.

It was too large. More than 200 people attended the Barrett celebration. In Sweden, public events cannot include more than 50 people. Anyone who organizes a larger gathering is subject to a fine or up to six months in prison.

If you’ve been following the virus news out of Sweden, this fact may surprise you. Sweden has become notorious for its laissez-faire response. Its leaders refused to impose a lockdown in the spring, insisting that doing so was akin to “using a hammer to kill a fly.” They also actively discouraged mask wearing.

Ever since, people in other countries who favor a more lax approach have held up Sweden as a model. Recently, as new cases have surged in other European countries, some of Sweden’s defenders have claimed vindication.

How are you supposed to make sense of all this? Several readers have asked me that question, and the answers point to some lessons for fighting the virus. I think there are three key ones from Sweden:

1. It is not a success story. Over all, Sweden’s decision to let many activities continue unabated and its hope that growing immunity to the virus would protect people does not look good. The country has suffered more than five times as many deaths per capita as neighboring Denmark and about 10 times as many as Finland or Norway.

“It was a terrible idea to do what they did,” Janet Baseman, an epidemiologist at the University of Washington, told me.

2. But Sweden did more than some people realize. It closed schools for students ages 16 and older. It encouraged residents to keep their distance from one another. And it imposed the ban on big gatherings, which looks especially smart now.

Compared with other viruses, this one seems especially likely to spread in clusters. Many infected people don’t infect a single other person, while “as few as 10 to 20 percent of infected people may be responsible for as much as 80 to 90 percent of transmission,” The Atlantic’s Zeynep Tufekci has explained.

Given this, it’s less surprising that Sweden’s recent virus performance looks mediocre rather than horrible.

3. Swedish officials have been right to worry about “sustainability.” Strict lockdowns bring their own steep costs for society. With a vaccine at least months away, societies probably need to grapple with how to restart activities while minimizing risk.

Sweden’s leaders do not seem to have found the ideal strategy, but they are asking a reasonable question. “We see a disease that we’re going to have to handle for a long time,” Anders Tegnell, Sweden’s top epidemiologist, told The Financial Times, “and we need to build up systems for doing that.”

The fact that Sweden is no longer an extreme outlier in new virus cases — even as life there looks more normal than in most places — offers a new opportunity to assess risk.

The number of confirmed new coronavirus cases around the world has accelerated in the past week and is consistently exceeding 300,000 per day for the first time. Here’s a map showing global outbreaks.

President Trump announced on Twitter that he was now immune from the virus and could not spread it. Twitter labeled his post “misleading and potentially harmful.”

Dr. Anthony Fauci, the U.S. government’s top infectious disease expert, took issue with the Trump campaign, which he said featured him in an advertisement without his consent and misrepresented his comments.

Memory loss. Confusion. Grasping for everyday words. Some virus survivors are coping with troubling cognitive long-term symptoms that have impaired their ability to work and function normally. “It feels as though I am under anesthesia,” one said.

Trump is set to hold a rally tonight in Sanford, Fla., one week after he left the hospital. He has asked his campaign to put him on the road from now until Election Day, Axios reports.

Several Republicans have recently tried to distance themselves from Trump, suggesting they think he is hurting their chances to win re-election. “The best check on a Biden presidency is for Republicans to have a majority in the Senate,” said Senator Thom Tillis of North Carolina, who has trailed his Democratic opponent.

Daily polling diary: Recent national polls have suggested that Joe Biden is in position for a landslide, leading by more than 10 points. Recent state polls show a closer race — which offers Trump some reason for hope, The Times’s Nate Cohn explains. Either way, Biden is running well ahead of where Hillary Clinton was in 2016, Dave Wasserman of the Cook Political Report notes.

Judge Amy Coney Barrett will appear before the Senate Judiciary Committee this morning for the first hearing of her Supreme Court nomination. Senator Kamala Harris, who cited inadequate safety measures, will attend remotely.

The Los Angeles Lakers are N.B.A. champions. The Lakers, led by LeBron James, beat the Miami Heat to cap off an unusual but exhilarating postseason inside the Disney World “bubble.” It’s James’s fourth title.

The number of reported homicides, rapes and robberies in the New York City subway has spiked this year, despite diminished ridership.

Paul Milgrom and Robert Wilson, both of Stanford University, were awarded the Nobel in economic science today for improvements to auction theory and inventions of new auction formats.

After a year spent drifting across the top of the world, frozen in sea ice, a German research ship returned home today, ending the largest Arctic science expedition in history.

Q. AND A. Maureen Dowd interviews and profiles James Murdoch, who quit his father’s company, partly because of political disagreements.

Lives Lived: In 1979, Carol Paumgarten opened Steps on Broadway, a dingy one-room dance studio in Manhattan. She went on to train three generations of New York dancers, and her studio welcomed stars including Misty Copeland, Mikhail Baryshnikov and Madonna. Paumgarten has died at 76.

The 1619 Project — a series of articles, podcast episodes and more about slavery’s role in American history — caused a passionate debate when The Times Magazine published it last year. It argued that 1619, when enslaved Africans first landed in Virginia, was as much of a founding date for the United States as 1776.

The series received widespread praise, and its creator, Nikole Hannah-Jones, won a Pulitzer Prize for her “sweeping, provocative and personal essay” at the center of the project. The series also received criticism from prominent historians who argued that it contained inaccuracies, like the claim that the American Revolution was in large part an attempt to protect slavery from Britain.

If you’ve heard about this debate but not yet dug into it, now is a good time to do so. Bret Stephens, a Times Opinion columnist, has published a column explaining why he agrees with the critics. You can also read a letter from five historians, followed by a response from Jake Silverstein, the Magazine’s editor in chief. Jake later followed up with a second note, making a change. And last month, Nikole gave a lecture about the project in Iowa, where she grew up.

Adam Serwer of The Atlantic has written an overview that includes interviews with people on both sides of the debate.

Start off the week with a versatile cabbage salad that breaks up the monotony of your usual greens. Any kind of chicken will work here, be it poached or grilled or leftover rotisserie from the night before. The miso-sesame vinaigrette brightens up the green. And you can use something other than cabbage; any sort of crisp, crunchy lettuce will work.

There are few TV programs as soothing (and beloved) as “The Great British Baking Show.” Since its premiere in 2010, it has remained one of Britain’s most popular shows, inspiring countless knockoffs and even a coloring book. Nearly 11 million people watched the premiere of the new season last month.

“It is a television series, but we always try to think of it as an event, almost like a Wimbledon, or an Olympics,” said the show’s executive producer. The Times chronicles how the show’s comfort-viewing status has reached new heights.

The voice of young America

How is the new generation responding to the current climate in America? The Times spotlighted 10 talented young Black poets to help answer that question through their work. They write about fire season, protests, civil rights, girlhood and more. “The smoke in Oakland has hands,” Leila Mottley, 18, writes, describing dangerous streets full of smoke and ash. Read the rest of their words here.

For more poetry, The Los Angeles Times put together a guide to the American poet Louise Glück, who won the Nobel Prize in Literature last week.

Vulture compiled a list of the 100 most influential scenes in animation, including “Bugs Bunny” and “Shrek.”

In its opening sketch, “Saturday Night Live” spoofed the fly that landed in Vice President Mike Pence’s hair during the debate last week.

Here’s today’s Mini Crossword, and a clue: Oolong and so on (four letters).

P.S. The word “xenoarchaeologist” — someone who studies alien civilizations — appeared for the first time in The Times yesterday, as noted by the Twitter bot @NYT_first_said.

Lalena Fisher, Ian Prasad Philbrick and Sanam Yar contributed to The Morning. You can reach the team at themorning@nytimes.com.