If schools across the United States return to “normal” in January, the average student will have lost nearly seven months of learning. But the low-income students among them will have lost more than a year.

Parents must be part of the solution. But the yawning gap between rich and poor that existed even before the pandemic also affects parental involvement. The conventional wisdom in schools is that low-income parents don’t get involved. Now, they need to be super-involved.

“There is no going around parents anymore,” said Alejandro Gibes de Gac, founder and chief executive of Springboard Collaborative, a Philadelphia-based organization that trains parents to be reading coaches. To make sure students continue to learn, he said, “we’ve got to work with and through them.”

That’s even more true in low-income countries, many of which have no instruction during the pandemic at all. Globally, Covid-19 could cost students $10 trillion in earnings over the course of their lifetimes, according to the Brookings Institution.

Here, we’ll look at two approaches to engaging parents — one used here in the United States by Springboard and one used in Botswana — that can help children learn in a few weeks what normally takes months or years of schooling.

Springboard’s premise is that all parents are eager to help their children. But they need skills and confidence. “About a third of families can’t read the book their child is holding — either because of language or literacy,” Mr. Gibes de Gac said.

So how can they teach their child?

One strategy for young children that Springboard uses doesn’t require literacy from the parents; it’s called the book walk. First, choose an illustrated book and look at the pictures with your child, then ask (in any language) “What do you think is happening?” As the child reads the text, ask her about what’s going on. Afterward, ask her what happened, and if her ideas were right. 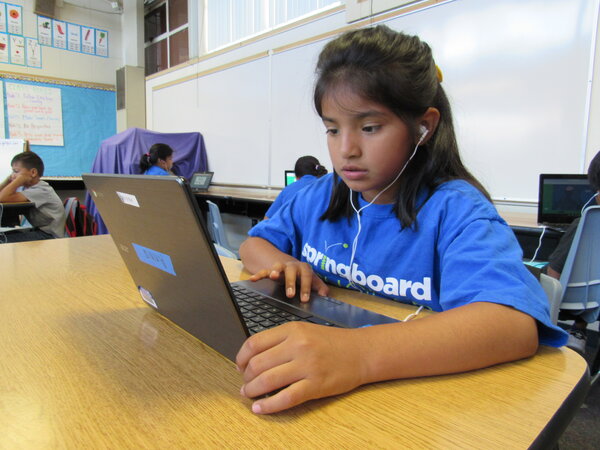 When Covid-19 hit, Springboard ramped up. The group trained 3,000 incoming Teach for America members. Freed from geographical constraints, Springboard went from working in 62 schools to 667. For families outside those schools, Springboard created an app and a four-week home plan with free e-books.

Springboard can’t assess its virtual programs until schools resume testing kids. But they know families attend workshops. Turnout averages 91 percent — and in some places, such as Washington, D.C., attendance has been 99 percent, Mr. Gibes de Gac said. Among the families Springboard works with now, Gibes de Gac said that parents read more with their children than did parents in the in-person program: 26 minutes per day, as opposed to 22. The longer a child reads with a parent, the more she learns.

Cutora got a laptop from the school, and Springboard gave her access to an online library. Her teacher met with students remotely three times a week. Ms. Mosley got a daily text with tips — for example, “Have your child make facial expressions relating to what she reads.”

“I’m not computer savvy. They just made the steps pretty simple,” Ms. Mosley said. She said the best tip was asking Cutora to describe different characters in the book.

Before this, Ms. Mosley said, Cutora didn’t read for fun. “Now sometimes I come in, and she has a book and is practicing different techniques, like sounding out words. Sometimes she gets her little brothers or younger sister and reads to them, and has them do the same.”

In Botswana, on March 18, the government announced it was closing schools. Over the next 72 hours, an organization called Young 1ove (that’s “love” with a numeral 1 instead of a letter “l,” as in “one love”) that works with the Ministry of Basic Education scrambled to collect phone numbers from students in third, fourth and fifth grades all over the country. Young 1ove’s staff ended up with 7,550 phone numbers — and no plan for what to do with them.

They knew that whatever they did would use phones. The vast majority of Botswanans have no access to the internet, no computer, no smartphone. But most households do have basic mobile phones.

Kids could get classes on Botswana TV and radio while at home. But many students quickly gave them up, or never started. “They think the teachers are too fast for them,” said Marea Bathuleng, whose children are 9 and 10.

Young 1ove asked parents if they wanted to participate in a math program. “At first they were very skeptical — teaching math over the phone?” said Seolebale Elizabeth Tlhalerwa, who coaches students and other Young 1ove facilitators. But 70 percent of parents said yes. The Low-Tech Remote Education program launched on April 27, at a total cost of $50,000.

To measure success, Young 1ove divided families at random into three groups. Some got a weekly bulk text with several equations and a word problem to solve. In another group, students and parents also spent 15 or 20 minutes on speakerphone with a Young 1ove facilitator, who walked the child through the problems. (In the first month, all students got the same problems.) A third, the control group, got nothing.

Seeing their children struggle was a shock for many parents. “Parents didn’t really know the progress of the student,” said Ms. Tlhalerwa. “But when they realized the student couldn’t do addition, they became hands-on.”

The program’s biggest challenge is that cell coverage in rural areas is spotty or nonexistent. Edith Morena, a facilitator, said that another issue was parental patience. “They scold the students if they can’t get what they were supposed to do. Many said they can’t watch the students struggle with something as easy as adding problems.”

“A third of the students in grade five can’t do subtraction,” said Noam Angrist, an American who co-founded Young 1ove along with Moitshepi Matsheng, who leads the government’s National Youth Council. “And that was before schools closed. Now they’re learning almost nothing. They could be losing learning. A small intervention makes a big difference.”

Mr. Angrist, Ms. Matsheng and other researchers found that after four weeks, participants substantially improved their math skills — the group that could do no math at all was cut in half. At that point, Young 1ove began sending students problems keyed to their level, so further gains could be larger.

“Schools everywhere talk about remote education on the internet and Zoom, but didn’t have the mind-set that it could actually be done through SMS and phone calls,” Ms. Tlhalerwa said, referring to text messages. “This is very cheap, and we can reach out to everyone, even in remote areas. As much as the pandemic has brought a lot of negativity, it also brought something new.”

Tina Rosenberg (@tirosenberg) won a Pulitzer Prize for her book “The Haunted Land: Facing Europe’s Ghosts After Communism.” She is a former editorial writer for The Times and the author, most recently, of “Join the Club: How Peer Pressure Can Transform the World” and the World War II spy story e-book “D for Deception.”

To receive email alerts for Fixes columns, sign up here.