The Brexit Party leader told Jeremy Vine on BBC Radio 2 the US President is being treated by Joe Biden like Boris Johnson is by Keir Starmer in the UK. Mr Farage argued it was clear Donald Trump was now seizing the opportunity to win over his supporters against the Democrat candidate with his “upbeat” speech on the balcony of the White House as he returned from hospital after contracting coronavirus.

Mr Farage explained: “This guy, this guy is quite good at turning things around and surprising people.

“It’s tough to be in government during a crisis like this.

“Trump has tried to fight the campaign on law and order and the economy but clearly now it’s going to be dominated by COVID and what to do.

“So what Trump has done is to try to seize the initiative, coming out of hospital in those dramatic scenes with the helicopter.

“He stood on the balcony of the White House and he echoed President Roosevelt in the 30s by saying we have nothing to fear but fear itself, life needs to go on.” 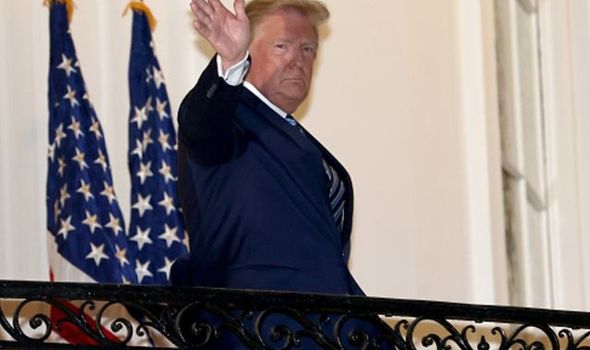 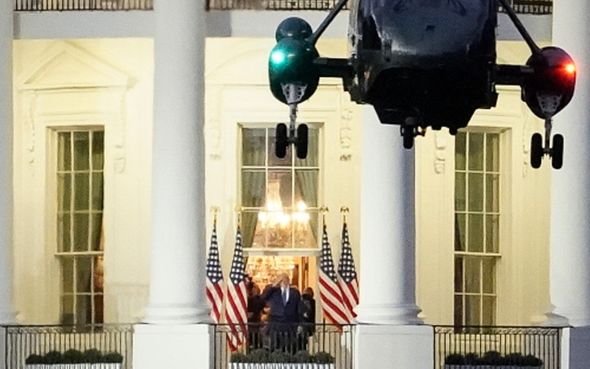 He added: “If the majority of the American people want to continue to stay in lockdown and are terrified of the virus, he will lose.

“But my feeling is it’s about time we heard something a bit more upbeat and optimistic, and perhaps a bit more realistic.”

Trump faced a backlash on Tuesday for removing his mask when he returned to the White House and urging Americans not to fear the COVID-19 disease that has killed more than 209,000 people in the country and put him in hospital.

Trump arrived at the White House on Monday in a made-for-television spectacle in which he descended from his Marine One helicopter wearing a white surgical mask, only to remove it as he posed, saluting and waving, on the mansion’s South Portico.

“Don’t let it dominate you. Don’t be afraid of it,” Trump said in a video after his return from the Walter Reed Medical Center military hospital outside Washington where he was admitted on Friday for the disease caused by the coronavirus.

“I’m better, and maybe I’m immune – I don’t know,” he added, flanked by American flags and with the Washington Monument in the background. “Get out there. Be careful.”

Trump, who received experimental treatment, has repeatedly played down the disease, which has killed more than 1 million people worldwide. The United States has the world’s highest death toll from the pandemic.

White House dcotor Dr. Sean. P. Conley, stressed that the Republican president, who is running for re-election against Democrat Joe Biden in the Nov. 3 election, would have world-class medical care available around the clock.

Trump has repeatedly flouted social-distancing guidelines meant to curb the virus’ spread and ignored his own medical advisers. He mocked Biden at last Tuesday’s presidential debate for wearing a mask when campaigning.

“I was aghast when he said COVID should not be feared,” said William Schaffner, a professor of preventive medicine and infectious diseases at Vanderbilt University Medical Center in Nashville.

“This is a disease that is killing around a thousand people a day, has torpedoed the economy, put people out of work. This is a virus that should be both respected and feared.”

Democrats also weighed in. “This is a tragic failure of leadership,” Democratic Senator Chris Coons tweeted.

But Trump depicted himself as a man who vanquished the disease and emerged stronger. 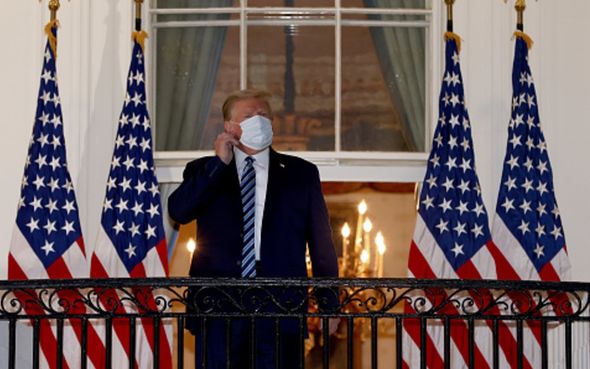 “If the President bounces back onto the campaign trail, he will be an invincible hero, who not only survived every dirty trick the Democrats threw at him, but the Chinese virus as well,” he wrote on Twitter.

A Twitter post by Biden showed images of himself donning a mask and Trump removing his. “Masks Matter. They save lives,” the caption read.

White House spokesman Judd Deere said every precaution was being taken to protect the president and his family. Physical access to Trump would be limited and appropriate protective equipment would be worn by those near him.

Questions continue to swirl about the true state of Trump’s health after a weekend in which his doctors offered contradictory or opaque assessments of his condition.

His oxygen saturation dipped enough to require supplemental oxygen on Friday and Saturday and he will receive his last intravenous dose of the antiviral drug, remdesivir, at the White House on Tuesday, his doctors said.

Trump was tweeting early on Tuesday.