The 2020 election was always going to end like this.

But if the nature of this October climax was unpredictable, it seemed all but foreordained that the coronavirus pandemic would dominate the campaign to the end. And for all of the tumult of the race between President Trump and Joseph R. Biden Jr. — for all of the other currents battering the country and its leaders in an election year — the issue of the virus has never retreated as the overwhelming factor.

As a singular force in the country’s political life, the pandemic has resisted Mr. Trump’s efforts to change the subject and quashed the wishful thinking of countless voters who shared his hope it would fade quickly. It has endured through a season of racial justice protests and spasms of vandalism and violence, through the death of a Supreme Court justice and the revelations of Mr. Trump’s personal tax returns and a fiasco of a presidential debate just this week.

And after all of the efforts by Mr. Trump to dismiss the disease as a threat, and all of the angst among his opponents that he might manage to convince voters he was right, his diagnosis confirmed with a neon exclamation point the impossibility of that goal.

Anne-Marie Slaughter, the head of New America, a liberal-leaning think tank, said the “omnipresence” of the pandemic had made it the defining political challenge for governments around the world. With national electorates in myriad countries assessing leaders chiefly in terms of disease control, she said the United States was no exception.

“If you can’t pass this test, a lot of the rest of it is secondary — if you can’t keep people safe,” Ms. Slaughter said. “It’s just so elemental.”

But in many major countries, she said, voters appeared eager to reward leaders for getting the virus under control, most notably in South Korea where the incumbent president’s party earned a smashing victory in legislative elections last spring. The American campaign has the potential to yield the world’s first major election since the onset of the pandemic in which voters deliver an emphatically negative judgment on their government’s response.

The newest developments in Washington matter, of course — perhaps for the stability of the government and the outcome of the election, and certainly for the collective American experience of a public-health crisis and the deep economic distress it has produced.

Mr. Trump has been the world’s loudest critic of prudent pandemic-control policy, and his contracting the disease that he dismissed as a threat even this week is an irony of Sophoclean proportions even if it does not change the way many voters think about him. 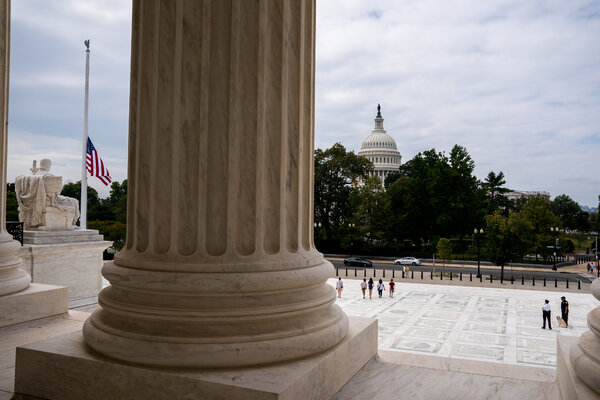 Should it turn out that the coronavirus has spread throughout the government, on Capitol Hill as well as the White House, it could become an impediment not only to the campaign but also to upcoming events like the confirmation hearings of Judge Amy Coney Barrett, Mr. Trump’s pick for the Supreme Court.

But long before Mr. Trump contracted the coronavirus, he had already earned a ruinous verdict from many Americans on his role in addressing the disease. On every subsidiary debate arising from the pandemic — on questions of reopening businesses and schools, implementing mask mandates and social distancing, even on hastening the delivery of a vaccine — polls have found Mr. Trump on the wrong end of public opinion, sometimes by gaping margins.

That dynamic has dragged him down against Mr. Biden even in states where voters approve of Mr. Trump’s handling of the economy, and even in states where they share his hard-line views of crime, immigration and public order — issues that have often helped Mr. Trump excite his political base and, at times, turn the attention of the national news media away from the pandemic.

Nevertheless, there has endured in both parties, and across much of the national media, a conviction that Mr. Trump was an operator so wily, a showman so gifted and a provocateur so cynical that he would somehow manage to play upon voters’ hopes and fears in just such a way as to smother the virus as an electoral consideration.

There were predictions, in late spring, that when the economy began to rebound from rock bottom, Mr. Trump might easily persuade voters to see a partial recovery as a miraculous resurrection. There was downcast analysis among Democrats, when Mr. Trump’s August nominating convention intersected with days of rioting in Kenosha, Wis., that an incendiary law-and-order message would turn the country’s racial rifts to the president’s advantage.

There was even fear among Mr. Trump’s critics that voters might be duped en masse into believing that the pandemic was, indeed, a thing of the past, because of a highly dubious announcement from Mr. Trump in the fall that a vaccine was at hand.

And yet, the pandemic persisted, and so did the alarm of voters. A recent poll conducted by The New York Times and Siena College found that half of likely voters believed the worst of the virus was still ahead. By a 15-point margin, voters disapproved of the president’s leadership on the disease.

Jim Hobart, a Republican pollster, said that while some voters on the right had turned their attention away from the coronavirus, the bulk of the electorate remained focused on the disease.

“One of the central tensions of the race,” he said, “is that while a majority of the country is focused on the coronavirus, conservative Republican voters are more focused on the economy, as well as what the president refers to as law and order.”

Nick Gourevitch, a Democratic pollster conducting tracking polls about the pandemic and the election, said the virus had never slipped from the top of voters’ minds. In a survey he conducted this week, before the announcement of Mr. Trump’s positive test, Mr. Gourevitch said that voters identified the pandemic as their primary concern about the president’s leadership.

“The pandemic was light-years above everything on there,” he said, adding that over the past six months, “If you always bet on public opinion being on the side of concern over health, you almost never would have been wrong.”

It must be said — as a matter of ritual, as much as anything else — that Mr. Trump’s instincts for political theatrics and racial division, and his determination to hold onto power, make it difficult to discount him entirely even at this late hour, and even as he confronts a personal medical emergency. And there is always the possibility that the image of an ailing president — even an unpopular one — engenders sympathy with some voters.

But with voting underway in numerous states, including crucial presidential battlegrounds like Wisconsin and North Carolina, he is running out of time. And for a candidate who has never managed to settle on a coherent, persuasive message about the pandemic, Mr. Trump’s own medical emergency now stands as a towering obstacle to him finding such an argument in the final stretch.

For Mr. Biden and Democrats further down the ballot, meanwhile, the president’s diagnosis is less a disruptive event than a confirming one, reinforcing the critique they have been delivering all along.

“With Covid cases surging and the economy sputtering, this election was always a referendum on the administration’s pandemic negligence and failures,” said Jesse Ferguson, a Democratic strategist. “Trump’s diagnosis just shows that no one is safe from this until we have someone who can get it under control.”