When asked to condemn “white supremacists and militia groups” during his debate with Joe Biden this week, President Trump gave a largely garbled answer, asking for definitions and caveats, attempting to misdirect attention to leftist violence, and repeatedly interrupting the moderator. One part of his answer, however, was crystal clear. “Proud Boys, stand back and stand by,” Mr. Trump said.

Rather than condemn white power groups, Mr. Trump instead issued an unambiguous call to them to be ready.

Watchdog groups and analysts have debated about how to classify the Proud Boys. Its members explicitly disavow white supremacy in a bid for respectability, but its ideology is clearly white supremacist: Photographs of members flashing the white power sign, the presence of members at white power events and at rallies and expert analyses of the group’s online content make this clear.

They should be seen as fellow travelers with white power groups and activists. Names and tactics vary, but the white power movement is united in ideology and intent. Its adherents include propagandists calling for the end of non-European immigration, those who carry out attacks mislabeled “lone wolf” violence in places like El Paso, Pittsburgh, Charleston, S.C., and Christchurch, New Zealand, and groups that train secretly for war, like the Base, and even for nuclear war, like Atomwaffen Division.

It also includes members of the Ku Klux Klan, neo-Nazi and racist skinhead groups, and large segments of the Boogaloo Boys and extralegal militias. This is why it is a mistake to understand Mr. Trump’s statement as directed solely to the Proud Boys — which had, before the night was over, incorporated “Stand Back, Stand By” into a badge logo. Other groups aligned with the white power movement will certainly interpret Mr. Trump’s message as including them. This complex web has worked exactly this way since the late 1970s, with disastrous results.

The white power movement is, in many ways, an incredibly diverse array of activists. I found in my research that though it is a fringe movement, its supporters represent a cross-section of American life: rich and poor and middle class; religious leaders and felons; men and women and children; people in cities and suburbs and rural areas.

What binds these disparate groups is that they espouse the violent defense of white supremacy. They see the white race as under attack — from immigration, from the rise of the nonwhite population, and from the acceptance of multiculturalism by much of the nation.

For them, defending the white race and white culture from these forces requires a violent attempt to stop the country’s demographic changes. Some of them wish to provoke race war, overthrowing the nation itself. Others simply wish to attack immigrants and keep people of color from voting.

But both positions unite in a war on American democracy. 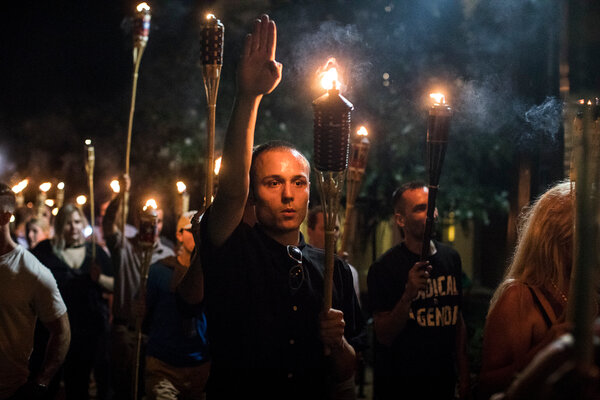 Before the debate, this attack on democracy itself was not fully clear to me, not even after a decade researching the earlier white power movement and several years watching its resurgence after the 2017 Unite the Right rally in Charlottesville, Va. This movement declared war on the state, and especially the federal government, in 1983. It then embarked upon a series of violent acts, most notoriously the Oklahoma City bombing of 1995.

But there is something new today: The president and his administration are at war on the democratic process, as we see in his weakening of the Post Office and the credibility of mail-in ballots, in calls for “poll watchers” that are clear invitations for intimidation, and in statements by Mr. Trump that cast doubt on his willingness to accept the results of the election.

Not only does “Stand back and stand by” fail to denounce and disavow white supremacist violence, it seems to be a call to arms and preparedness. It suggests that these groups, who are eager to do violence in any case, have the implicit approval of the state.

The day after the debate, Mr. Trump claimed not to know who the Proud Boys were, and told them to “stand down.” But even the most generous interpretation of his comments does not release Mr. Trump from accountability. The Proud Boys — some of whom were involved in the Charlottesville rally — should be well known to the president. And no matter what he says now, he can’t unring the bell.

The groups Mr. Trump declined to disavow will interpret attempts to clarify to be merely strategic denials. He did not, in his initial statement, specify a moment for which the Proud Boys ought to “stand by.” But if Mr. Trump loses, they will surely move from “stand by” to “engage,” prepared to take violent action. If Mr. Trump wins, they will likely believe that they are an unofficial apparatus of state violence.

Because of my research on the white power movement’s history, I regularly hear from people sounding the alarm. They are advocates who try to deradicalize those attempting to leave white power groups. They are watchdogs that monitor white power internet activism. They are people at tech companies charged with flagging hate speech, and who are exhausted by the sheer magnitude of the task and the hatefulness they encounter.

They are teachers and librarians and parents worried about what to do when they meet young people headed down the road to violence. And they are even people who have worked in the Trump administration, people in his own Department of Homeland Security and F.B.I., who have repeatedly identified white power as the most prominent source of domestic terrorism. Whistle-blowers like Elizabeth Neumann and Brian Murphy at the Department of Homeland Security have been warning of insufficient resources and will to confront this problem at the highest levels of the Trump administration.

Many of these people predict increasing violence from now through the election, and after, regardless of winner. The white power movement has long sought not only to intimidate voters — which it has done — but also to inflict mass casualties. There is no reason to think that strategy will change.

We are talking about a resurgence of the movement responsible for the Oklahoma City bombing, the largest deliberate mass killing on American soil between Pearl Harbor and the Sept. 11 attacks. The fact that most people don’t remember the Oklahoma bombing as the work of a movement reveals how deeply entrenched the white power movement is as an American problem.

This is a movement that has been using online social network activism since 1983, that has repeatedly targeted people and infrastructure, that has not been effectively confronted. As I found in the extensive archives of the white power movement, we have not allocated sufficient resources to surveil and stop white power violence.

Criminal trials of its activists have often failed. Piecemeal responses to the coordinated recruitment of active-duty military personnel and other groups with similar expertise have not sufficiently stopped the flow of weapons, tactics, and training to these groups.

We are decades, if not generations, into this problem. A call to arms like “stand back and stand by” is nothing less than catastrophic.

Kathleen Belew is an assistant professor of history at the University of Chicago and the author of “Bring the War Home: The White Power Movement and Paramilitary America.”