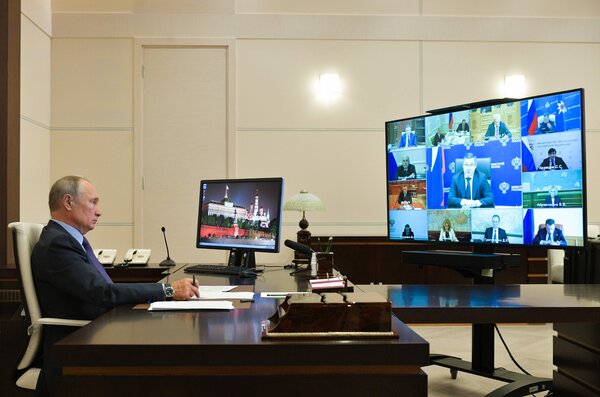 Russia’s Federal Protective Service, responsible for protecting President Vladimir Putin, has helped build a virus-free bubble around Mr. Putin that far outstrips the protective measures taken by many other leaders.

Russian journalists who cover Mr. Putin have not seen him up close since March. The few people who meet him face to face generally spend as much as two weeks in quarantine first. The president conducts his meetings with senior officials by video link from his residence outside Moscow, which has been outfitted with a disinfectant tunnel.

Paranoia? Mr. Putin’s extreme caution reflects not only his age — he is 67, putting him at relatively high risk of severe illness from the coronavirus — but also what critics describe as paranoia honed during his former career as a K.G.B. spy.

Mr. Putin’s diligence is striking because, in communicating with the Russian public in recent months, his government largely declared the virus vanquished.

In other coronavirus developments:

A former president in Ukraine, Petro Poroshenko, announced on Wednesday that he had tested positive for the virus. Parliament canceled plenary sessions until Oct. 20 after at least 10 lawmakers tested positive.

Early clinical trials have been completed for a second Russian vaccine, a health official said on Wednesday, moving it closer to registration under the Russian approach of approving vaccines for emergency use before beginning late-stage trials.

A study of nearly 85,000 cases in India found that children of all ages can become infected with the coronavirus and spread it to others.

South Africa will today begin allowing some international tourists to enter the country, but at least a dozen European countries, including Britain, France, Russia, Iceland and the Netherlands — as well as the United States and most of Latin America — remain on a no-fly list.

The chaotic debate on Tuesday between President Trump and former Vice President Joe Biden left allies and rivals alike questioning the state of American democracy. In world capitals, there was some shock, some sadness and some weariness.

“My own response is that it makes me despondent about America,” said John Sawers, a former British diplomat and head of a risk analysis firm. “The country we have looked to for leadership has descended into an ugly brawl.”

A shift: The Commission on Presidential Debates said it would change its format after Mr. Trump’s constant interruptions during the first of three debates leading up to the Nov. 3 election. There may be new limits on speaking times. There is no decision yet on allowing the moderator to cut off microphones.

Analysis: Mr. Trump’s claim that balloting, already underway, was a “fraud and a shame” and proof of “a rigged election” amounted to a declaration that he would try to throw any outcome into the courts, Congress or the streets if he were not re-elected, our national security correspondent writes.