The former fighter pilot already had a flight plan: bombs away.

“Come on, this is why I’m in the Senate,” Ms. McSally told a Republican ally — before quickly sending out a tweet that made her among the first elected Republicans to support President Trump’s plan to ram through a Supreme Court nominee before the election.

Her celerity reflected her reality: Ms. McSally (who also expressed her condolences to Justice Ginsburg’s family) badly needed a reboot after months spent trailing her Democratic challenger, Mark Kelly, in the polls and in fund-raising totals, and this was it, in an any-news-is-good-news kind of way.

Now, as Mr. Trump’s pick for the court, Judge Amy Coney Barrett, meets with senators ahead of a confirmation battle this month, the political consequences of that fight have become a plot twist in a race that has largely been going against Ms. McSally.

In the days after Justice Ginsburg’s death, Mr. Kelly and other Democrats saw huge spikes in their online fund-raising, while Ms. McSally and other Republicans saw more modest bumps. But the impact of the Barrett nomination will probably be contingent on the tenor of the televised Judiciary Committee hearings, set to begin Oct. 12, and whether Republicans are seen as unfairly handling the process and whether Democrats are seen as overreaching in fighting Judge Barrett.

Yet Ms. McSally and other struggling Republicans who have lashed their fates to Mr. Trump — including Senators Thom Tillis of North Carolina and Kelly Loeffler of Georgia — see the fight as favorable: The nomination fight provides an opportunity to change the subject from the gloomy and damaging pandemic narrative to something likely to generate new energy among the Republican base.

“McSally is grasping for anything she can find that might shift the dynamics of a race she was losing because she hasn’t been able to shift that dynamic on her own,” said Andy Barr, a Democratic political consultant active in statewide Arizona races.

Whether the nomination fight is enough to help her close the gap against Mr. Kelly is unclear, but operatives from both parties interviewed after Justice Ginsburg’s death said she stood to benefit more than the Democratic candidate.

“I don’t think this will have a major effect, but she has more to gain because she hasn’t fired up her voters,” Mr. Barr said. “For our side, yeah, we’ll raise more money. But how much more enthusiasm can we generate? How much more angry can we be?” 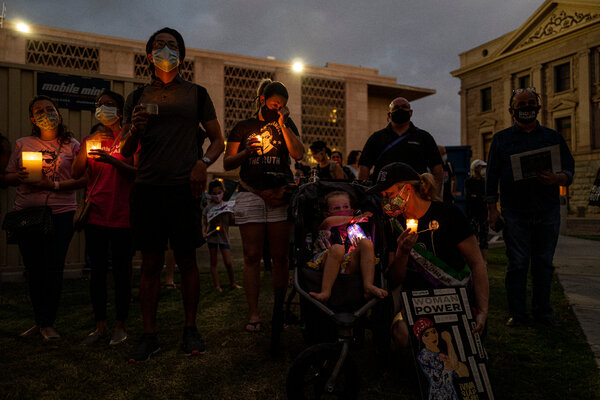 At first, it seemed like the spotlight would shine most on the low-key Mr. Kelly: This is a special election, and details of Arizona’s election law mean that a victorious Mr. Kelly could, theoretically, be seated by Nov. 30, in time to vote on Mr. Trump’s pick.

But that scenario now seems to be a long shot as Senate Republicans fall into line behind the president. Now the focus has shifted to Ms. McSally.

Last week, a Washington Post-ABC poll of likely voters in Arizona appeared to show a tightening race at the top of the ticket, with Mr. Trump pulling even with his Democratic opponent, Joseph R. Biden Jr., after a spate of recent surveys showing Mr. Biden slightly ahead. It also showed Mr. Kelly holding just a one-point lead, his worst showing in months.

The poll, conducted from Sept. 15 to Sept. 20, was taken before Cindy McCain, the widow of the still-popular Arizona Senator John McCain, endorsed Mr. Biden, with roughly half the respondents surveyed after Justice Ginsburg died. Ms. McCain, who has told friends she does not believe Ms. McSally did enough to defend her husband from Mr. Trump’s attacks, had refused to endorse the Republican senator, saying, “I have no interest in it.”

Other recent polls paint a slightly different picture, one that Republican operatives think is more reflective of the core dynamics of the race — that Ms. McSally in faring slightly worse among Arizona Republicans than Mr. Trump, a situation that typically spells trouble for down-ballot candidates.

“She’s had Republican bleed-off,” said Kirk Adams, former chief of staff to Gov. Doug Ducey, a Republican, and former speaker of the Arizona House of Representatives. “Somewhere between 10 to 15 percent of people who are choosing the president are not choosing McSally.”

The Barrett nomination could give her an opportunity to make up lost ground. In recent days, Ms. McSally has warned that Democrats will try to expand the court to compensate for Mr. Trump’s three appointments, as part of her larger argument that her campaign is part of a larger effort to prevent a liberal takeover of Washington (Mr. Kelly, too, says he opposes changing the court).

“I’ve said if the dynamics of this race do not change, the advantage is to Mark Kelly; the dynamics just changed,” said Mr. Adams, who added that he was unsure whether the nomination fight would have a significant impact on the race. “If I’m Mark Kelly, this is not a pleasing development. It has the chance of making this a little bit less of a referendum on the president, and more of a referendum on those traditional issues that drive Republican voters.”

The response of the two candidates in the wake of Justice Ginsburg’s death on Sept. 18 vividly illustrated how differently they viewed that development.

Ninety minutes after the Supreme Court announced that Justice Ginsburg had died, Ms. McSally paid her respects to the Ginsburg family on her official Senate Twitter account; precisely 15 minutes later, she wrote on her official account that the Senate “should vote on President Trump’s next nominee.”

Mr. Kelly, by contrast, quickly sent out a statement commemorating Justice Ginsburg’s life, but waited out the weekend before issuing a careful comment on Republicans’ plans to hold a confirmation vote before the election. “When it comes to making a lifetime appointment to the Supreme Court, Washington shouldn’t rush that process for political purposes,” he wrote.

People close to Mr. Kelly, speaking on condition of anonymity, said the former astronaut — who is married to former Democratic Representative Gabrielle Giffords — intends to maintain a low profile on the nomination, and will continue to emphasize his distance from his party’s leadership in Washington, which remains unpopular in Arizona.

Ms. McSally had tried, and failed, to use the Supreme Court as an issue in the past: She ran Facebook ads showing her support for Brett Kavanaugh’s nomination during her failed 2018 race against Kyrsten Sinema, a Democrat, for the state’s open Senate seat. Ms. Sinema opposed Mr. Kavanaugh, but took pains to distance herself from party leadership, as Mr. Kelly has. (Ms. McSally was appointed in December 2018 to fill the seat vacated by interim Senator Jon Kyl.)

And appealing to her base comes with its own risks. In that regard, Ms. McSally is facing a dilemma confronted by many Republicans this year: How to retain the support of conservatives who back Mr. Trump without completely alienating suburban moderates?

Her strength is in rural Arizona, the most deeply red part of the state; she has consistently trailed in Maricopa County, home to Phoenix, which makes up 60 percent of the electorate.

Her team has put more energy into the county, a traditional Republican stronghold which is trending blue, but it has yet to yield results: Ms. McSally is on pace to lose the county by a far greater margin than her more than four-point deficit in 2018, according to recent polls. Embracing Mr. Trump’s Supreme Court plans could push that deficit even deeper.

Whatever happens, Justice Ginsburg’s death has reminded voters — if they needed any reminding — of the existential political issues at stake in this year’s election, and has focused renewed attention on a Senate race many had deemed a done deal.

At a Students for Trump rally earlier this month in Chandler, south of Phoenix, it took only a few minutes for the crowd to break out in chants of “fill the seat” as raucous supporters awaited the arrival of Donald Trump Jr.

“This state, whether you like it or not, could determine the future of America,” the younger Mr. Trump told a crowd of 800 who were packed, mostly maskless, into an event space that was supposed to hold 500. “If you would’ve told me that 10 years ago, I would’ve thought you were joking.”

Katie McKay, a Republican from the Phoenix suburb of Cave Creek who sat in the audience, said she had read the stories about Mr. Kelly potentially casting a tiebreaking vote and was determined to stop him.

“I am worried because he’s basically a communist,” she said of Mr. Kelly.

The tone was dramatically different a day earlier, when a solemn group of about 200 supporters of Justice Ginsburg lit candles and left flowers near the State Capitol to pay respects to the second woman ever to serve on the nation’s highest court.

One of them was Heather Rutter, a former middle-school social studies teacher and mother of two, who said she was not happy when Ms. McSally was appointed to the seat that had been occupied by Mr. McCain, also a fighter pilot, but had been willing to give her a chance.

“I think Martha McSally has gone way too far over into the Trump end,” said Ms. Rutter, 51, who described the upcoming fight over the court in one word: “Monumental.”

Glenn Thrush reported from Washington and Hank Stephenson from Arizona.

It’s up to President Trump to decide whether to take part in the next two debates, which will feature new rules aimed at stanching chaos. Read the latest updates.

Many rules have changed during the pandemic, making it harder to figure out how to cast your ballot. This interactive guide can help you ensure your vote is counted.

Keep Up With Our Coverage

Get an email recapping the day’s news