President Donald Trump’s nominee for the United States Supreme Court has close ties to a charismatic Christian religious group that holds men are divinely ordained as the “head” of the family and faith. Former members of the group, called People of Praise, say it teaches that wives must submit to the will of their husbands.

Federal appeals judge Amy Coney Barrett has not commented publicly on her own or her family’s involvement, and a People of Praise spokesman declined to say whether she and her husband are current members.

But Barrett, 48, grew up in New Orleans in a family deeply connected to the organisation and as recently as 2017 she served as a trustee at the People of Praise-affiliated Trinity Schools Inc, according to the nonprofit organisation’s tax records and other documents reviewed by The Associated Press news agency. Only members of the group serve on the schools’ board, according to the system’s president.

The AP news agency also reviewed 15 years of back issues of the organisation’s internal magazine, Vine and Branches, which has published birth announcements, photos and other mentions of Barrett and her husband, Jesse, whose family has been active in the group for 40 years. On Friday, all editions of the magazine were removed from the group’s website.

People of Praise is a religious community based on charismatic Christianity, a movement that grew out of the influence of Pentecostalism, which emphasises a personal relationship with Jesus and can include baptism in the Holy Spirit and speaking in tongues. The group organises and meets outside the purview of a church and includes people from several Christian denominations, but its members are mostly Roman Catholic. 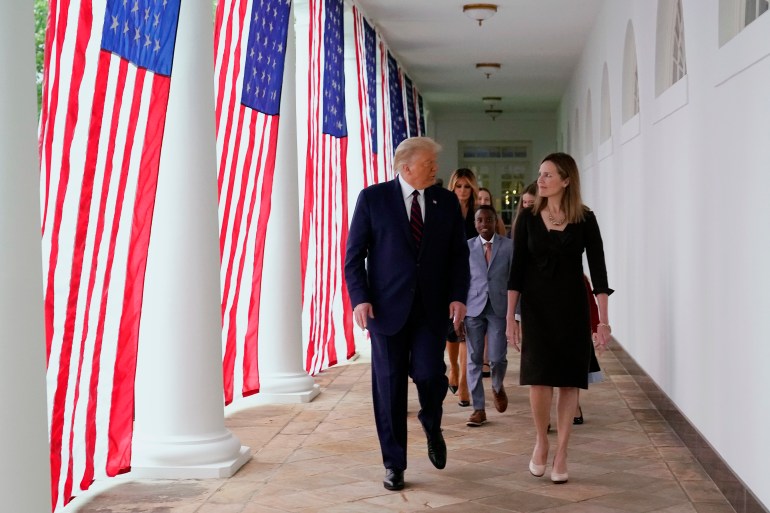 President Donald Trump walks along the Colonnade with Judge Amy Coney Barrett after a news conference to announce Barrett as his nominee to the Supreme Court [Alex Brandon/AP Photo]Barrett’s affiliation with a conservative religious group that elevates the role of men has drawn particular scrutiny given she would be filling the high court seat held by Justice Ruth Bader Ginsburg, a feminist icon who spent her legal career fighting for women to have full equality. Barrett, by contrast, is being hailed by religious conservatives as an ideological heir to the late Justice Antonin Scalia, a staunch abortion-rights opponent for whom she clerked as a young lawyer.

“A judge must apply the law as written,” Barrett said. “Judges are not policymakers, and they must be resolute in setting aside any policy views they might hold.”

Barrett’s advocates are trying to frame questions about her involvement in People of Praise as anti-Catholic bigotry ahead of her upcoming Senate nomination hearings.

Asked about People of Praise in a televised interview last week, Vice President Mike Pence responded: “The intolerance expressed during her last confirmation about her Catholic faith I really think was a disservice to the process and a disappointment to millions of Americans.”

But some people familiar with the group and charismatic religious groups like it say Barrett’s involvement should be examined before she receives a lifelong appointment to the highest court in the nation.

“It’s not about the faith,” said Massimo Faggioli, a theology professor at Villanova University, who has studied similar groups. He says a typical feature of charismatic groups is the dynamic of strong hierarchical leadership and a strict view of the relationship between women and men.

Several people familiar with People of Praise, including some current members, told the AP news agency the group has been misunderstood. They call it a Christian fellowship, focused on building community. One member described it as a “family of families”, who commit themselves to each other in mutual support to live together “through thick and thin”.

But the group has also been portrayed by some former members, and in books, blogs and news reports, as hierarchical, authoritarian and controlling, where men dominate their wives, leaders dictate members’ life choices and those who leave are shunned.

The AP news agency interviewed seven current and former members of People of Praise and reviewed its tax records, websites, missionary blogs and back issues of its magazine to try to paint a fuller picture of an organisation that Barrett has been deeply involved in since childhood.

People of Praise was founded in South Bend, Indiana, in 1971 as part of the Catholic Pentecostal movement, a devout reaction to the free love, secular permissiveness and counterculture movements of the 1960s and early 1970s. Many of the group’s early members were drawn from the campus of nearby Notre Dame, a Catholic university.

The group has roughly 1,700 adult members nationwide, with branches and schools in 22 cities across the US, Canada and the Caribbean. All members are encouraged to continue to attend church at their own parishes.

After a period of religious study and instruction that lasts from three to six years, people involved in People of Praise can choose to make a lifelong covenant pledging love and service to fellow community members and to God, which includes tithing at least five percent of their gross income to support the group’s activities and charitable initiatives, according to a statement on the group’s website.

People of Praise’s more than 1,500-word covenant, a copy of which was reviewed by the AP news agency, includes a passage where members promise to follow the teachings and instructions of the group’s pastors, teachers and evangelists.

“We agree to obey the direction of the Holy Spirit manifested in and through these ministries in full harmony with the church,” the covenant says.

It is unclear whether Barrett took the covenant. But members of the organisation and descriptions of its hierarchy show that members almost invariably join the covenant after three to six years of religious study or they leave, so it would be very unusual for Barrett to continue to be involved for so many years without having done so.

A 2006 article in the group’s magazine includes a photo of her attending a People of Praise Leaders’ Conference for Women. The magazine also includes regular notices when members are “released from the covenant” and leave the group. The AP news agency’s review found no such notice of Barrett’s or her husband’s departure.

A request to interview Barrett made through the 7th Circuit Court of Appeals in Chicago, where she currently serves as a judge, was declined. The judge did not mention People of Praise in her 2017 Senate judicial questionnaire, filled out prior to her confirmation for the bench.

Jesse Barrett did not respond to voicemail or email sent through his law firm in South Bend.

People of Praise spokesman Sean Connolly declined to discuss the Barretts or their affiliation with the group.