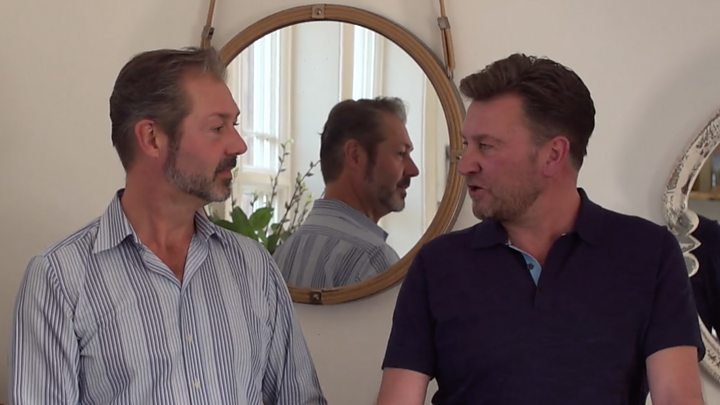 “It was devastating for both of us. The entire household income was wiped out overnight,” says Adrian Leary, former Thomas Cook cabin crew.

Both Adrian and his partner Paul Jones worked as air stewards when the holiday business collapsed last September, taking more than 9,000 UK jobs with it.

“Paul had only flown for four years, I’d flown for almost 25. I absolutely loved it. I never had any intention of doing anything else. I would have done it till the day I died,” explains Adrian, full of passion as he reminisces about the jobs they lost.

The couple realised they wouldn’t get back into aviation when the pandemic took hold in March as airlines immediately cut flights and soon after, jobs. After looking for other work, their local job centre in St Helens told them they qualified for an enterprise initiative, so they began planning something new.

On the platform of their local train station in Frodsham, Cheshire, Adrian and Paul spotted an empty building and an opportunity.

“We negotiated with the landlord for a rent-free period because of lockdown. Then as lockdown eased we opened. We’re a brand new business combining a coffee shop and interiors and gifts,” says Adrian, although their café still hasn’t fully opened because of the continuing changes in guidance for hospitality due to the pandemic.

“For a pair of old duffers, we had no idea on social media. We had to learn Instagram and Facebook,” says Paul, “but it’s been absolutely amazing, we’ve had such a good reception.”

He tells me last Saturday they were absolutely packed, and they couldn’t believe it.

This week marked a year since Thomas Cook collapsed, so the pair decided to launch a special initiative to get their former crew back together: come by dressed in your old uniform and you’ll get a free tea or coffee.

“The last year has been dreadful,” says Cathy, who was with Thomas Cook for 25 years. A year on she still isn’t working.

“It’s been really hard. I don’t think employers actually realise what a talent pool crew are. We were firemen, policemen, councillors, diplomats, medical staff – if something went wrong up there, there was no 999 to call.

“It’s hard to get back into aviation because of Covid. It’s a huge market now because so many others have been made redundant,” she says.

Since the pandemic began, more than 30,000 jobs have been made redundant at UK airlines, according to the industry body Airlines UK. Added to that are cuts that have been made by airports, baggage handlers and third parties that rely on flights and the ecosystem around airports.

Sandra loved her job. “Fabulous, everything you can dream of” is how she describes it. She worked for Thomas Cook for 23 years, and says she felt “bereaved” when the company collapsed.

“I was very fortunate, I got a job with Jet2 on the ground,” she says, standing neatly in her Thomas Cook uniform, looking like she’s about to depart for a long-haul destination, her hair in a perfect bun.

“I was there for seven weeks and then the coronavirus hit. I’ve been furloughed since. I don’t know yet what’s happening and if I’ll go back.”

Matt McKay was a senior first officer at Thomas Cook for three years. We first met last year, days after the business collapsed.

“I thought I’d be there till I retired,” he tells me. “I was aiming to buy a house, settle down and be living here close to my family.” His partner was expecting a baby a few months after Thomas Cook went under.

Matt had interviews with a number of airlines and then got a job with Aegean, based in Athens, which he says wasn’t ideal but the family would “make it work”.

Soon after starting, the pandemic hit. “I was there for three days before they sent us home. I was put on leave until the end of March and then made redundant.”

Matt isn’t alone in people who suffered this double whammy of redundancy in aviation. I’ve been contacted by lots of former Thomas Cook staff who took jobs with some of the UK’s big airlines, including Jet2, BA and Tui. In some instances, staff completed training courses, only to be made redundant before making a flight. Others did just a handful and were then let go.

Matt says it has led to a period of self-reflection and realisation. “I don’t think I’ll be flying again until at least summer 2022.”

In the meantime, he’s starting his own business piloting drones for agriculture until the sector improves.

The collapse of Thomas Cook was at the forefront of what has been a devastating year for aviation. And as Covid-related job losses mount, airlines like BA have said they don’t expect demand to return to levels seen before the pandemic for two to three years.

It means that former crew, who say they have “aviation in our blood”, might have to wait a bit longer before they can return to the skies.