We’re covering the fight over the next U.S. Supreme Court justice, Europe’s second coronavirus wave and the protests that followed a police shooting in South Africa. 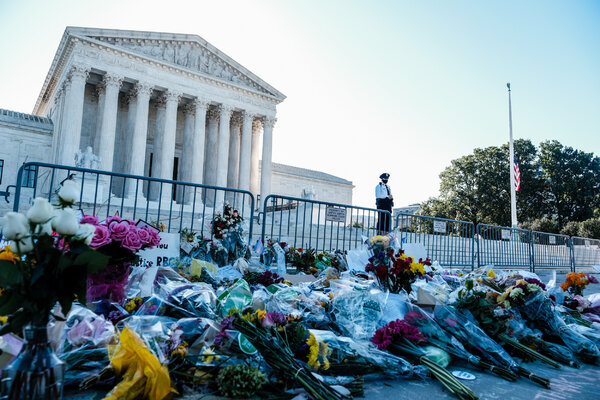 With the presidential election just weeks away, a fight to fill the Supreme Court vacancy left by the death of Justice Ruth Bader Ginsburg looms over the U.S. Senate.

Justice Ginsburg will lie in repose at the Supreme Court this week. President Trump, who wants the Senate to confirm a replacement before Election Day, promised to wait until after her funeral to announce his nominee — probably on Saturday. That would leave only 38 days until Election Day; the confirmation process takes, on average, about 70 days.

Democrats would need to sway two more Republican senators to block the nomination. Much is at stake: Another Trump-appointed justice could solidify the conservatism of the country’s highest court, with major implications for issues like abortion, immigration and health care.

Many European leaders are scrambling to avoid ordering widespread lockdowns as coronavirus cases increase in France, hospitals start filling up in Spain and British officials warn that a six-month fight to contain the virus lies ahead.

New, targeted lockdown measures took effect in Madrid on Monday, barring nearly a million residents from leaving their neighborhoods except for essential activities like work, school or emergency medical care. New cases in Spain have risen to more than 10,000 per day on average over the past week, exceeding the official tally in the spring, when Spain was one of the worst-hit nations in Europe. Testing is now more widely available.

Top scientific and medical advisers in Britain warned that infections could reach 50,000 a day by next month, a trajectory similar to those in France and Spain. On Monday night, Prime Minister Boris Johnson announced that as of Thursday, pubs and restaurants would be limited to table service and must close at 10 p.m. And Wales announced an expansion of lockdown measures to take effect on Tuesday.

Nearly a million people have died of the virus around the world, a staggering toll. At least 73 countries are seeing surges in newly detected cases.

Munich will require masks in some of its open-air spaces, including busy streets and popular squares, starting on Thursday, the mayor announced.

In India, where case numbers are among the highest in the world, the Taj Mahal reopened with restrictions on Monday.

Cuba faces one of its worst food shortages in years after the pandemic shattered its tourist-dependent economy.

The fallout from a police shooting in South Africa

Death at the hands of the police in South Africa is hardly uncommon — by one estimate, a South African dies in a police action every day. But the shooting of 16-year-old Nathaniel Julies last month led to protests that have commanded an unusual amount of attention, in South Africa and beyond.

Nathaniel, who had Down syndrome, was severely disabled, barely able to form complete sentences. A familiar figure in his neighborhood, he was often seen hanging out in local stores in the hope that someone would buy him his favorite cookie, or on the dance floor with his signature moves.

Much is unknown about what happened the night he was killed, next to a broken-down delivery van within sight of his family home. But three officers have been charged in connection with his death; the charges include murder and obstruction of justice.

Go deeper: In South Africa, unlike many places where police killings have sparked protests, a majority-Black police force is accused of abusing a majority-Black citizenry. The police station at the center of this case, for example, is staffed overwhelmingly by officers who are Black or of mixed racial heritage. It has been the subject of 80 complaints of brutality from 2012 to 2019, 10 of them involving fatalities.

The frustration, loneliness and fear of those left behind

The coronavirus crisis in the U.S. has claimed nearly 200,000 lives, the young and the old, those living in dense cities and tiny towns, people who spent their days as nursing home attendants, teachers, farm laborers and retirees. Those mourning them are trapped in a state of torment, in a country still firmly gripped by a pandemic. Above, a woman saying goodbye to her mother in a hospital in Texas this month.

In dozens of conversations with our reporters, those left behind described their turmoil. The daughter of a 71-year-old who died after contracting the virus was left with unanswered questions: “What if we were there?” “What if we hadn’t had him intubated?”

The Emmys: HBO’s “Succession” won best drama. But “Schitt’s Creek,” which swept the comedy awards, and “Watchmen,” with its socially resonant themes, stole the show.

Ireland: The coronavirus’s effect on the country’s economy has sent a chill through Dublin’s once-frenzied housing market, particularly Airbnb listings, which have been hit by a collapse in tourism.

Italy elections: A center-right coalition led by the anti-immigrant League party of Matteo Salvini, the nationalist former deputy prime minister of Italy, made gains in regional elections on Monday but failed to win the important region of Tuscany.

Mwazulu Diyabanza: The Congolese activist will appear in a Paris court this month after he tried to take an African treasure from a museum. He said it had been looted. The case raises broader questions about France and its attitude toward its colonial past.

Snapshot: The environment minister of Thailand was so fed up with the trash left at a national park that he vowed to find the culprits. When social media and old-fashioned detective work revealed the guilty party, government officials mailed them a box filled with the litter they had abandoned in a tent, above.

Lives lived: The soul singer and songwriter Roy Hammond, who wrote and produced the 1973 political funk barnstormer “Impeach the President,” died at 81 on Wednesday at his home in Allendale, S.C.

What we’re reading: This Atlantic article on the “Schitt’s Creek” character Moira Rose, written last year. Carole Landry from the Briefings team writes: “This piece dissects the fashion and vocabulary that went into building the hilarious character played by Catherine O’Hara.”

Cook: One-bowl carrot loaf cake with a tangy lemon glaze. Comforting and cozy, but still light and bright, it’s just the thing for an afternoon snack.

Read: Ben Macintyre’s “Agent Sonya” recounts the story of a woman who passed along atomic secrets when she wasn’t raising her family in the Cotswolds.

Watch: Check out this selection of movies from the New York Film Festival, which is mostly virtual this year.

Whether you’re in search of a book or a snack, At Home has lots of ideas on what to read, cook, watch and do while staying safe at home.

QAnon is a set of conspiracy theories centered on the idea that powerful institutions are controlled by cannibalistic pedophiles plotting against President Trump. Its adherents have tailored their ideas for Facebook, which has failed to restrict QAnon despite pledges to do so. Sheera Frenkel, who covers cybersecurity, talked to our On Tech newsletter about the spread of this lurid phenomenon.

The one idea we hear again and again is for Facebook to stop its automated recommendation systems from suggesting groups supporting QAnon and other conspiracies. Other than that, every expert has a different opinion.

One I spoke with said Facebook needed to decide whether it would take a hard line against all conspiracies. Another said it would be more productive to slowly cut back the circulation of QAnon-related information on Facebook and give people some clear information on why it’s false and dangerous.

Have any internet companies managed to slow the spread of false QAnon-related ideas?

Reddit used to be ground zero for QAnon until it banned a whole section of the site dedicated to the conspiracy in 2018. There is still QAnon stuff on Reddit but the content largely moved elsewhere — including to Facebook.

Could things have been different for conspiracies on Facebook, too?

I wonder how different our world would look if Facebook, YouTube and Twitter joined Reddit in taking coordinated, effective action against QAnon. That’s what the companies did in 2015 when the Islamic State was using social media to recruit new followers. You could see almost in real time that ISIS lost much of its ability to recruit online.

In my mind, that was the clearest example of the internet companies taking action to remove a dangerous group that was pervasive.

That’s all for today’s briefing. See you tomorrow.

P.S.
• We’re listening to “The Daily.” Our latest episode is about Justice Ruth Bader Ginsburg’s life and legacy.
• Here’s our Mini Crossword, and a clue: “Baby’s bed” (three letters). You can find all our puzzles here.
• The word “tumblesaulted” first appeared in The Times on Monday, according to the Twitter bot @NYT_first_said.
• Our “On the Runway series” on Wednesday will focus on Fashion Week in Milan. You can follow it on The Times’s Instagram fashion account, @nytimesfashion.