A teacher in Dallas, Texas is facing intense backlash after asking students to write an English essay about a modern-day “hero,” with accused Kenosha shooter Kyle Rittenhouse listed among the options.

The unnamed teacher asked high school English students to write a biography about a “hero for the modern age,” and listed six options, screenshots show. Students were then assigned to write an essay explaining why their choice best demonstrates the concept of a hero.

George Floyd, Cesar Chavez, Malcolm X and Gandhi were also on the list, though the English teacher misspelled two of the names. He wrote “Malcom X” and appeared to confuse Gandhi’s name, calling him “Mahatmas Gandhi,” screenshots show. (Gandhi’s first name was Mohandas and his nickname was Mahatma.)

Rittenhouse, 17, crossed state lines to join a militia group during protests against police brutality in Kenosha last month. He allegedly shot two protesters with an assault rifle that night, then drove home to Illinois.

Rittenhouse is charged with killing Rosenbaum, 36, and Anthony Huber, 26.

The protests erupted after police shot Jacob Blake, who is Black, in the back.

The English teacher handed out the biography assignment at W.T. White High School via Google Classroom. 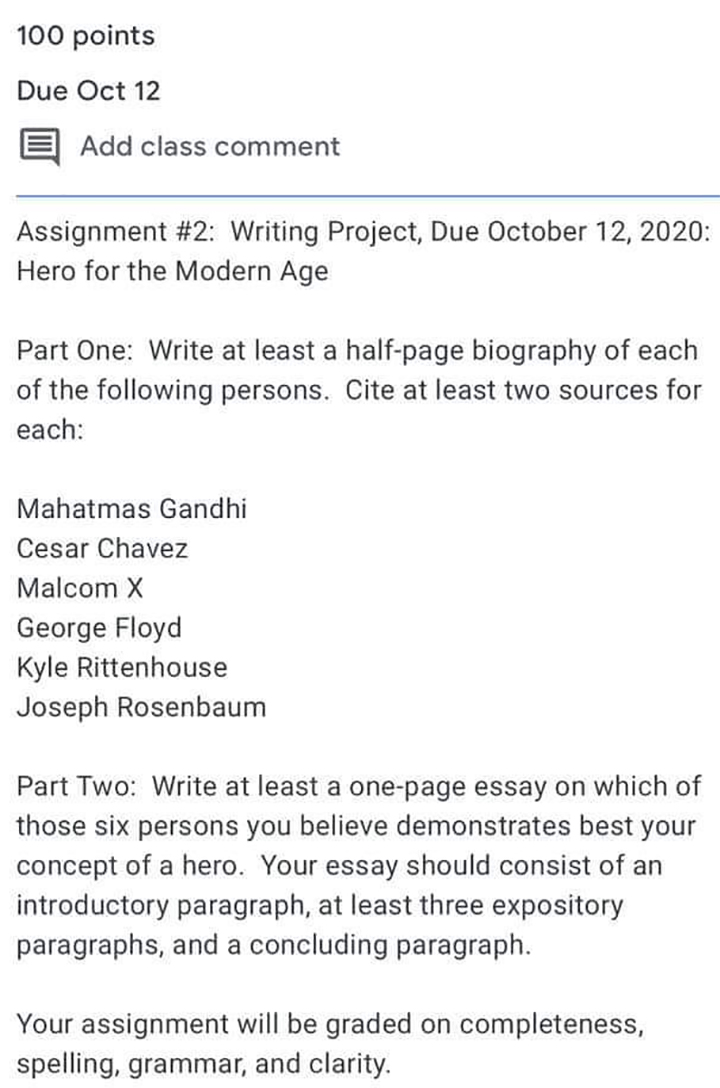 The Dallas Independent School District (ISD) has apologized after an image of the assignment emerged on social media. Several students and their parents also flagged the assignment to the school district.

“My brother was really in disbelief that this was actually an assignment,” Kristian Hernandez, whose brother is in the class, told NBC News.

“The juxtaposition of George Floyd’s name with Kyle’s name was just astounding,” she said. “The value of Black lives are not up for debate, and that’s what it felt like this was sort of getting at — by way of the names that were included.”

Hernandez also wondered why the list did not include any women.

The Dallas ISD says it cannot release the teacher’s name, but it’s investigating and has taken steps to address the complaints.

“Understandably, this caused some concern for the impacted students, and we apologize,” the school said in a statement to CBS News.

“Campus administration immediately removed the unapproved content and students are not required to complete that assignment. Due to personnel policies, we are not able to comment further, however, the appropriate steps are being followed pending investigation.”

The school district added that racial equality is a “top priority.”

“It is important that we continue to be culturally sensitive to our diverse populations and provide a space of respect and value,” the ISD said.

The teacher did not respond to a request for comment from CBS 11 News and KTVT.

Rittenhouse has been lionized as a hero among some far-right figures, including Fox News commentator Tucker Carlson. A crowdfunding campaign to raise money for his defence has collected more than $497,000 to date.

U.S. President Donald Trump has also defended the accused murderer amid a broader effort to paint anti-racism protesters as “thugs,” “anarchists” and “rioters.”

The president has also backed the extrajudicial killing of an Antifa supporter who fatally shot one of his own supporters in Portland.

Rittenhouse is due to appear in court later this month.

Tags: Back to Scho kenosha shooting