FBI director Christopher Wray says Moscow is interfering in US elections with ‘a steady drumbeat of misinformation’. 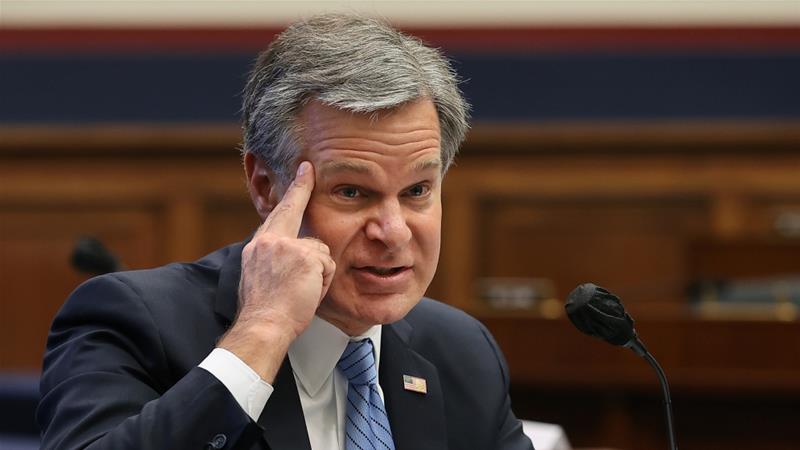 FBI Director Christopher Wray has warned that Russia is interfering in the 2020 US presidential elections with a steady stream of misinformation aimed at denigrating Democratic candidate Joe Biden as well as sapping Americans’ confidence in the election process.

Moscow is also attempting to undercut what it sees as an anti-Russian US establishment, the head of the Federal Bureau of Investigation told the Democratic-led House of Representatives’ Homeland Security committee on Thursday.

He said his biggest concern is a “steady drumbeat of misinformation” that he said he feared could undermine confidence in the result of the 2020 election.

Wray’s testimony follows an August 7 warning by the director of the National Counterintelligence and Security Center that Russia, China and Iran were all trying to interfere in the November 3 election.

The Republican president has long bristled at that finding, which Russia has denied.

Trump himself has cast doubts on the integrity of the election, repeatedly and without evidence questioning and criticising the increased use of mail-in ballots as vulnerable to fraud. Mail-in ballots are a long-established method of voting in the United States, and are expected to see a surge in use due to the coronavirus pandemic.

Regarding China, Wray said that the FBI is so active in monitoring Chinese efforts to acquire US technology and other sensitive information that it is opening a new counterintelligence investigation related to China “every 10 hours”.

‘Antifa not an organisation’

Wray also told legislators that Antifa is an ideology, not an organisation, testimony that puts him at odds with Trump and many of his supporters.

Wray said that Antifa, short for “Anti-fascist” which serves as an umbrella term for far-left-leaning activists, was a “real thing” and that the FBI had undertaken “any number of properly predicated investigations into what we would describe as violent extremism,” including into individuals who identify with Antifa.

But, he said, “It’s not a group or an organisation. It’s a movement or an ideology.”

Trump in June singled out Antifa as responsible for the violence that followed amid widespread protests against the death of George Floyd in police custody. In a tweet, he said that the US would be designating Antifa as a “terror” organisation, even though such designations are reserved for foreign groups and Antifa lacks the hierarchical structure of formal organisations.

Wray sought to make clear the scope of the threats the country faces while resisting legislators’ attempts to steer him into politically charged statements.

When asked whether extremists on the left or the right posed the bigger threat, he pivoted instead to an answer about how solo actors, or so-called “lone wolves”, with easy access to weapons were a primary concern.

“We don’t really think of threats in terms of left, right, at the FBI. We’re focused on the violence, not the ideology,” he said later.

The FBI director said racially motivated violent extremists, such as white supremacists, have been responsible for the most lethal attacks in the US in recent years. But this year, the most lethal violence has come from anti-government activists, such as anarchists and militia-types, Wray said.