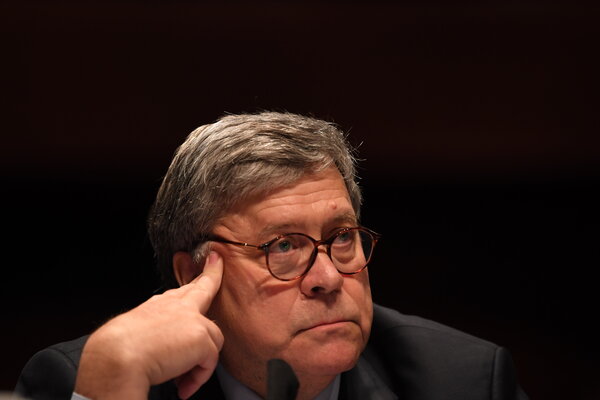 Protesters who engage in violence may surely be arrested and charged. But with sedition? Attorney General William Barr’s mind-set is that of a dictator. It is ironic that he works for President Trump, who encourages his supporters’ violence, or, according to Mr. Barr, sedition.

In March 2016, The Times published a video aptly called “Trump’s History of Encouraging Violence.” He can be seen saying such things as “Knock the crap out of them would you?” and “Part of the problem is … no one wants to hurt each other anymore.” His encouragement of violence is awful. But is it also sedition?

On April 17, he tweeted “LIBERATE MICHIGAN!” and “LIBERATE MINNESOTA!” at a time when heavily armed protesters were at the Michigan Capitol building. There has been much anti-mask and anti-lockdown violence.

Mr. Barr is part of an administration that is the most guilty of inciting violence in American history.

Goodbye to Coloring My Hair

As a woman in her early 60s, I have been musing for a while as to when would be a good time to stop dyeing my hair. The extended quarantine provided the perfect time.

Although I couldn’t wait to get my hair cut again, I do not miss being a brunette. I have to say I am loving my mostly salt-and-pepper hair. It matches my skin tone better, and makes my green eyes pop from behind the mask!

Ladies, why can’t we be the silver foxes? Why do only men with silver locks get awarded the title of distinguished?

It is time for us to embrace our longevity.