The UK is bracing for the return of hot weather this week, as forecasters predict this week will be the longest September warm spell in the UK since 2016. Met Office meteorologist Bonnie Diamond told Express.co.uk a pattern of warmer weather is expected to last “until at least the end of the week” in the UK.

Ms Diamond said: “It is a warm and sunny week for many of us across the UK this week.

“Plenty of sunshine for many and high temperatures especially in the south and east today and tomorrow, where we could see temperatures approaching 30C, possibly even 31C tomorrow.”

Ms Diamond said the warmer weather is due to “high pressure which is never too far away from the UK this week”.

She adds that in the forecast there is “plenty of sunshine, high pressure and warm air from a southerly direction.” 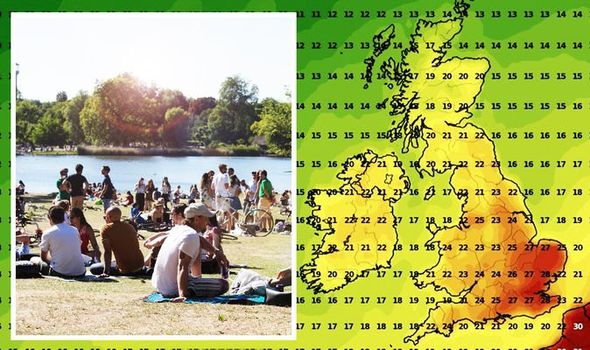 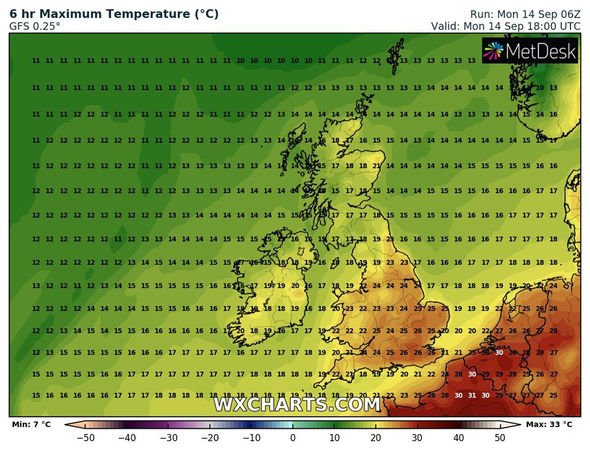 In light of the sizzling temperatures to come, a Level 2 heat-health alert has been issued for south-east England from Monday into Wednesday.

However, the Met Office is also forecasting some areas of the UK will see some cloud and rain today.

Ms Diamond added: “Little bit cloudier across the north-west of the UK today, so Northern Ireland and Scotland seeing some cloud and outbreaks of rain. Elsewhere a dry day.

“Higher temperatures very much focused across the south and east where we could see 30C, but for much of England and Wales we’re looking at temperatures widely above 25C. 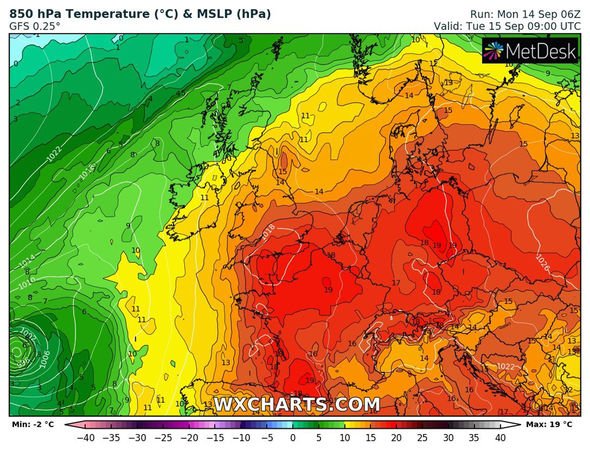 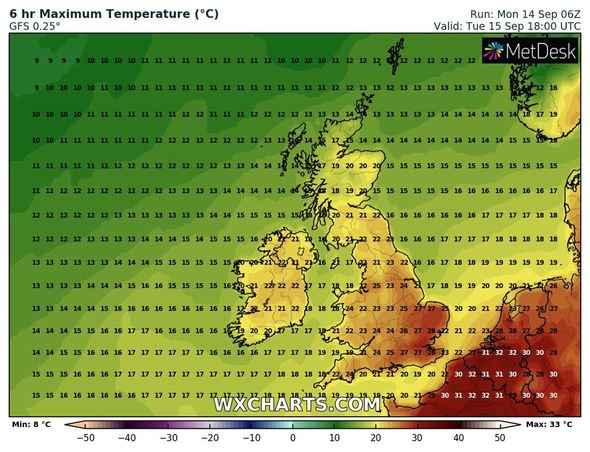 “Northern Ireland and Scotland looking at temperatures into the low 20s.

“So not quite as warm as the rest of the UK, but certainly still warmer than average for the time of year.

“The average temperature for the time of year is around 17 to 18C.”

Similar temperatures to Monday are also expected tomorrow, but temperatures could climb slightly higher in some parts of the south-east with 31C possible.

The Met Office is predicting Tuesday will be the hottest day this week.

Met Office Chief Meteorologist Frank Saunders said: “High pressure in combination with warm, southerly winds will bring a spell of summery weather across parts of the UK early this week, with plenty of sunshine and higher than average temperatures for most.

“On Monday and Tuesday temperatures in Northern Ireland and Scotland will be in the high-teens to low 20s Celsius but with cloudier skies at times, and the odd shower.

“England and Wales will be sunnier, especially today with temperatures widely above 25 Celsius. It’ll turn hot in southern and eastern areas with temperatures reaching around 30 Celsius in a few spots, possibly 31 Celsius on Tuesday.” 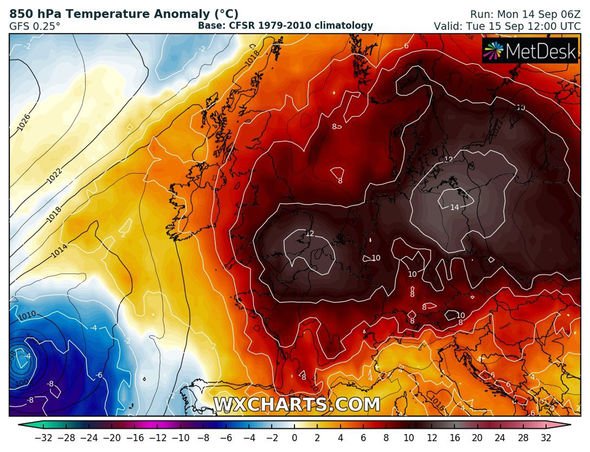 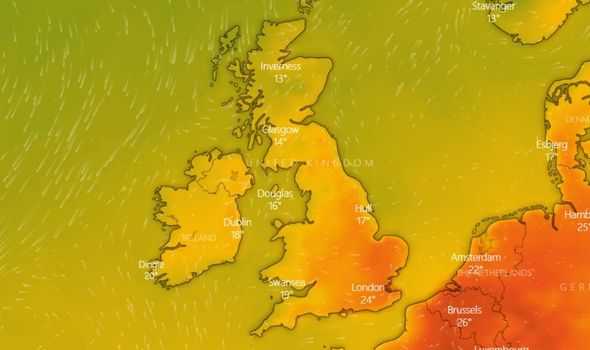 Currently, the hottest September temperature on record took place in 1906 when the mercury tipped 35.6 C at Bawtry, South Yorkshire.

But while the scorching weather this week isn’t expected to topple this record, this week will be the longest September warm spell in the UK since 2016, where temperatures reached 34.3 Celsius at Gravesend.

But on Wednesday morning a cold front is expected to bring cloud and some rain to parts of Northern Ireland, Scotland and northern England.

South of the cold front is expected to see a warm and sunny day on Wednesday, with some low clouds and mist possible in the morning.

Temperatures are expected to hit around the mid-20’s, reaching possibly 27 to 28C in the south.

Wednesday is not expected to be quite as hot as Tuesday, but it will still be warm for the time of year.

Commenting on the weather forecast for the second half of the week, Met Office deputy chief meteorologist, Chris Tubbs, said: “Thursday and Friday will be fine and dry for most as high pressure remains close to the UK.

“Whilst it’ll be cooler for northern areas with temperatures close to normal and the chance of frost in rural spots overnight, it’ll stay warm in southern and eastern parts of the UK with temperatures staying in the low to mid-20s Celsius into the weekend.”