UK government debt has risen above £2 trillion for the first time amid heavy spending to support the economy amid the coronavirus pandemic.

Spending on measures such as the furlough scheme means the debt figure now equals the value of everything the UK produces in a year.

Economists warned the situation would worsen before improving.

It is the first time debt has been above 100% of gross domestic product (GDP) since the 1960-61 financial year, the ONS said. 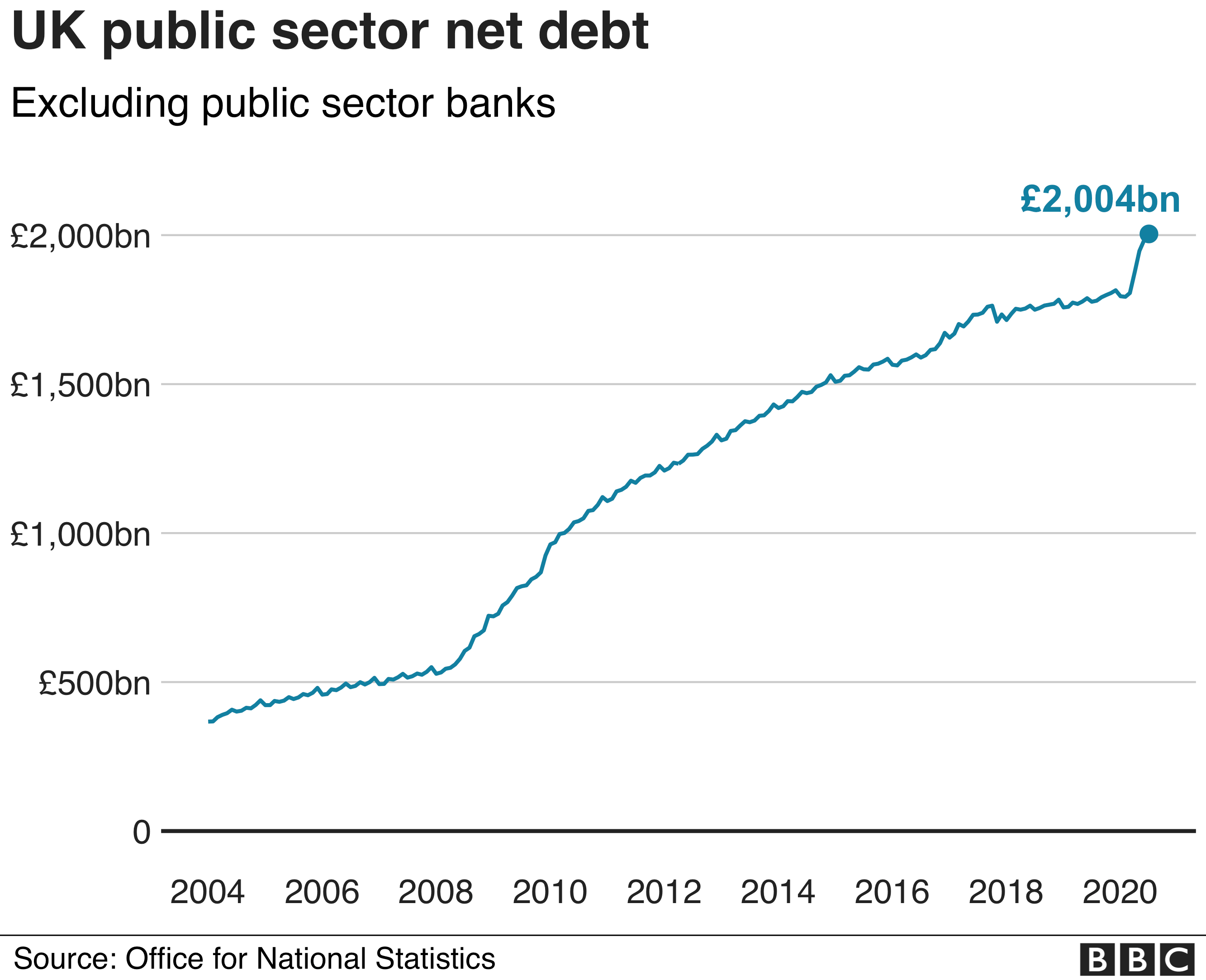 The July borrowing figure – the difference between spending and tax income – was £26.7bn, down from a revised £29.5bn in June.

It was the fourth highest borrowing in any month since records began in 1993. The three higher figures were the previous three months.

Those are big figures. What do they mean?

Ruth Gregory, senior UK economist at Capital Economics, said July’s borrowing figure was “another huge sum and pushes borrowing in the year to date to £150.5bn”.

“That is close to the deficit for the whole of 2009-10 of £158.3bn, which was previously the largest cash deficit in history, reflecting the extraordinary fiscal support the government has put in place to see the economy through the crisis.”

Chancellor Rishi Sunak said: “This crisis has put the public finances under significant strain as we have seen a hit to our economy and taken action to support millions of jobs, businesses and livelihoods.

“Without that support, things would have been far worse.

“Today’s figures are a stark reminder that we must return our public finances to a sustainable footing over time, which will require taking difficult decisions.”

How did it get to this?

£2 trillion is, obviously, a large amount of money. But in the circumstances, it was inevitable that government debt would cross that threshold.

Tax revenue has been hit hard by the pandemic as people and businesses earn and spend less. Government spending on programmes such as the furlough scheme has headed upwards. So the total amount owed has also increased, rapidly.

But the government’s borrowing costs – the interest rates it has to pay – are low. And some of the extra borrowing in effect ends up with the Bank of England, which has been buying government debt (known as gilts) in the financial markets under its quantitative easing (QE) programme.

QE is not specifically intended to ease the government’s financial strains – it’s meant to stimulate the economy – but it does have that effect.

In relation to annual national income, debt has crossed the 100% level. There’s no doubt the government would rather that had not happened.

But by that measure, government debt is still far short of the highs it reached in the aftermath of wars – the two world wars and the Napoleonic wars more than 200 years ago.

Carl Emmerson, deputy director of the Institute for Fiscal Studies, told the BBC’s Today programme it was “not really a surprise” that the government was borrowing a lot of money, given the size of its efforts to support people hit by the pandemic.

However, he added that interest rates were so low that the government was actually spending less on servicing its debts than had been forecast before the coronavirus crisis.

The ONS cautioned that borrowing estimates were subject to “greater than usual uncertainty”.

It said the June figure had been revised down by £6bn, largely because of stronger than previously estimated tax receipts and National Insurance contributions.

Should we be worried?

Analysts reckon there is worse to come, but that things will get better after that.

However, the sheer size of the debt means that the Treasury will be wary of doing anything that might make it any worse – and that means there may be less economic support for ordinary people in future.

“Looking ahead, borrowing looks set to jump temporarily in August, as the government makes the second and last Self-Employment Income Support Scheme payment and funds the Eat Out to Help Out scheme,” he said.

“Thereafter, it will decline, as the Coronavirus Job Retention Scheme, which cost £6.9bn to operate in July, is wound down ahead of its closure at the end of October, and firms make a huge VAT payment in March, for sales generated in Q2, as well as in that month.”

However, he added that with borrowing for this financial year expected to be about 17% of GDP, the chancellor was likely to be “relatively cautious” in his autumn Budget.