The vice president is set to address the coronavirus pandemic, a topic Republican speakers so far have mostly avoided. 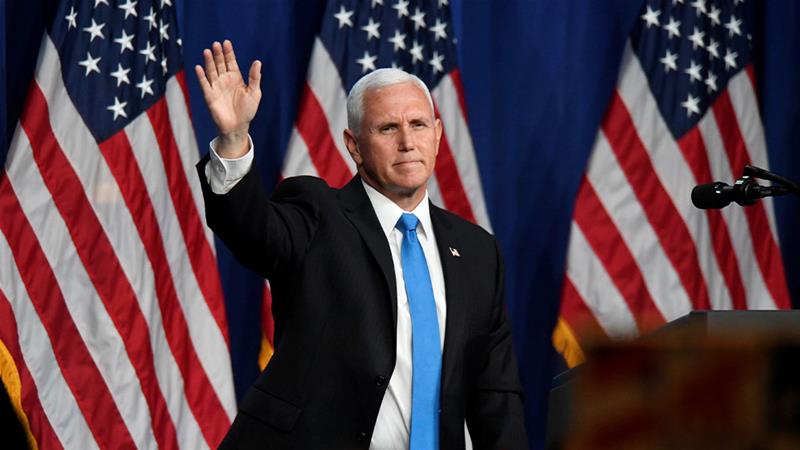 Vice President Mike Pence will take centre stage at the Republican National Convention on Wednesday to make the case that his boss, President Donald Trump, will bring back the United States economy to its pre-pandemic heights if given four more years in office.

Pence, who will be renominated as Trump’s running mate after on-and-off speculation that he might be dropped from the ticket, is the highest-ranking official to address the four-day convention aside from the president, who has made daily appearances.

Pence has served as the chair of the Trump White House’s coronavirus task force, managing the federal government’s response to the virus which has been criticized for failures. The pandemic – the worst public health crisis in a century – is still raging.

COVID-19 has killed more than 180,000 people and wrecked the US economy, putting tens of millions of Americans out of work. Republicans have barely mentioned the coronavirus in the first two days of their convention programme.

A White House official said Pence would not shy away from speaking about the virus and the administration’s work to tackle it. He is proud of that work, said the official, who noted that Pence’s appointment to lead the effort showed Trump’s confidence in him, the Reuters News Agency reported.

Aside from COVID-19, the Trump administration faces several other potential domestic crises. After months of racial unrest following the police killing of George Floyd, the city of Kenosha in the political swing state of Wisconsin was reeling on Wednesday after two people were shot dead in another night of violent protests. Police in Illinois arrested and charged 17-year-old Kyle Rittenhouse with murder. Trump said he is sending National Guard troops and federal law enforcement agents to Wisconsin at the request of the state’s governor.

Separately, a potentially catastrophic hurricane was churning towards landfall on Wednesday in Texas and Louisiana and will test the administration’s emergency response capabilities. California is battling some of the largest wildfires in its history. 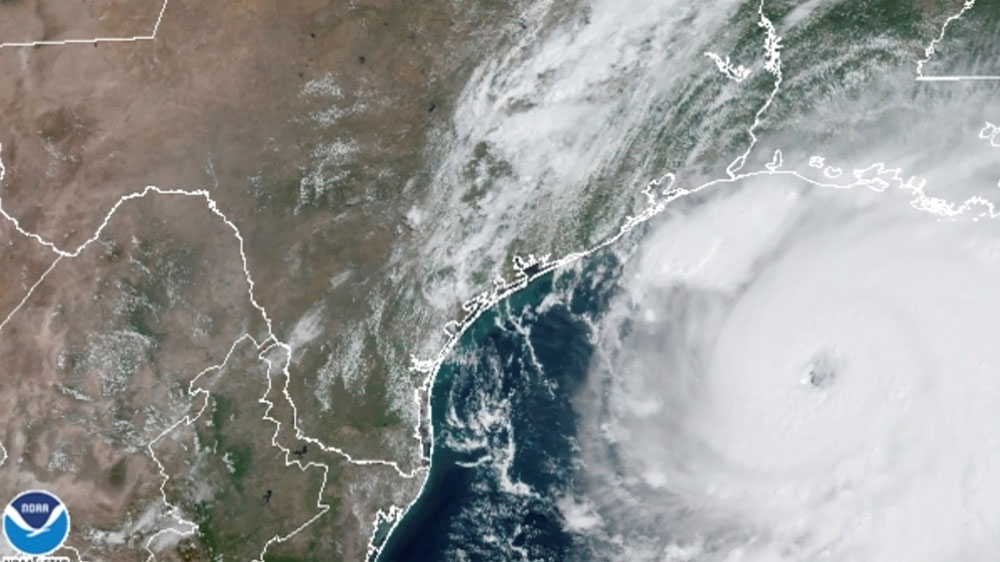 A former governor of Indiana, Pence has served as a loyal lieutenant to Trump, a former New York businessman and reality television star who had no governing experience when he became president in January 2017.

The vice president, a conservative Christian, serves as a key connector between Trump and evangelical voters, a powerful and influential part of the Republican political base.

Another White House official told Reuters that Pence would offer an optimistic vision for the country in his speech, while also providing a contrast with Democratic candidates former Vice President Joe Biden and Senator Kamala Harris. 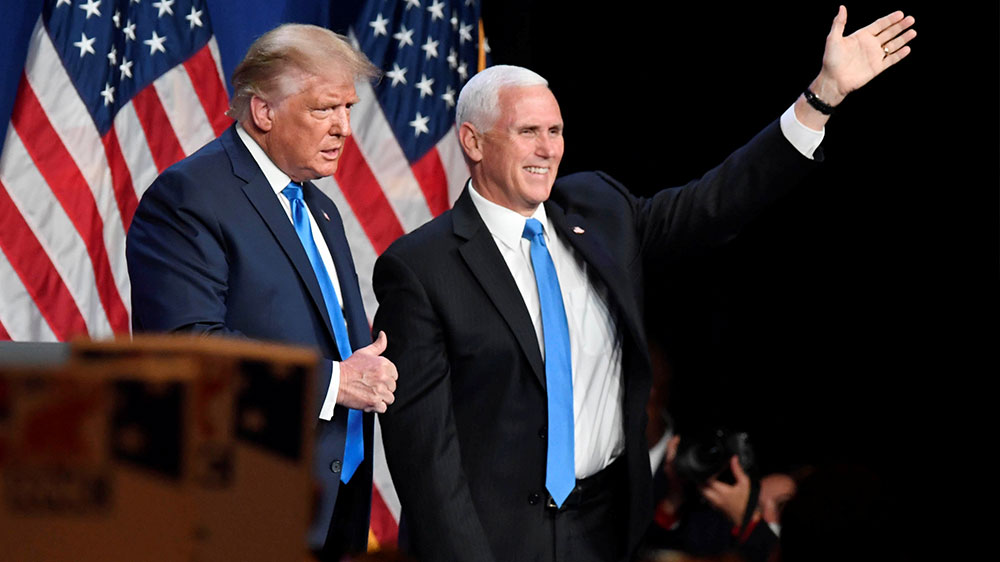 The first two days of the Republican gathering were peppered with ominous predictions of radical socialism and chaos if Democrats were to win the White House in the November vote.

First Lady Melania Trump struck a more compassionate note in her address from the White House Rose Garden, acknowledging the suffering from the pandemic as well as the harsh reality of racial unrest.

Pence will speak from Baltimore’s Fort McHenry, the inspiration for the US national anthem, The Star-Spangled Banner, providing a patriotic landmark as a backdrop and allowing space for an outdoor live audience.

Both parties’ conventions have been dramatically scaled back, taking place mostly virtually and without large live audiences to prevent the spread of the coronavirus.

Other speakers scheduled on Wednesday include Second Lady Karen Pence, Senators Marsha Blackburn of Tennessee and Joni Ernst of Iowa, South Dakota Governor Kristi Noem, and Kellyanne Conway, who announced earlier this week that she would be stepping down as White House adviser.

Trump plans to speak before a crowd on the White House South Lawn on Thursday, the convention’s last day. 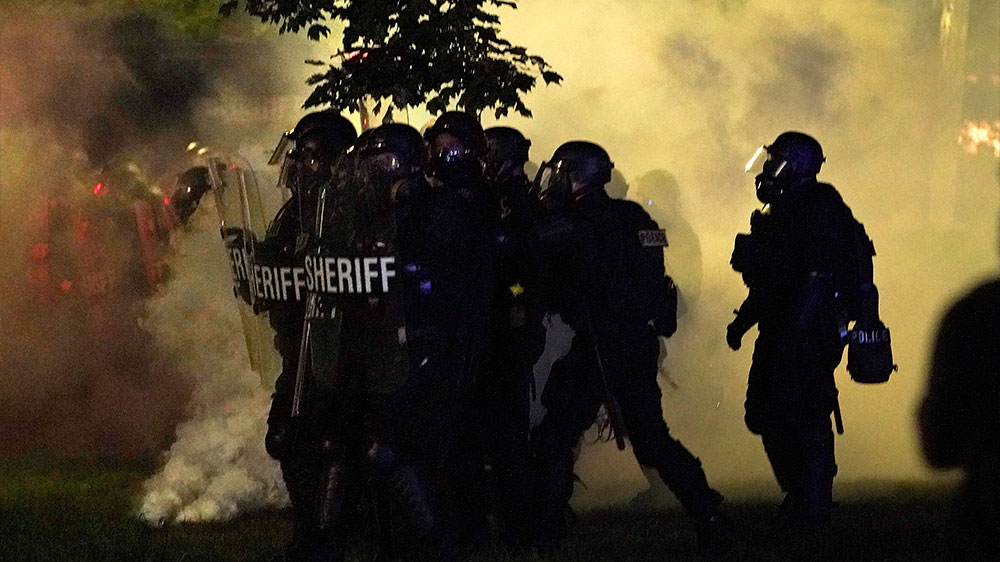 Trump is trailing Biden in national opinion polls and Republicans are hoping he will get a boost from a convention that is highlighting his re-election themes of “law and order” and a soaring economy before the coronavirus outbreak.

A Reuters/Ipsos poll released on Wednesday, indicated Biden held his lead over President Donald Trump in a national opinion poll taken August 19 to 25, with 47 percent of registered voters backing Biden and 40 percent supporting the Republican incumbent.

The 17 million RNC number reflects the audience across 11 TV networks between 10pm (02:00 GMT) and 11pm and does not include online and streaming viewers. Fox News had the biggest audience, with 7.1 million viewers.

Ratings for the first night of the virtual Democratic National Convention reflected viewers across 10 US TV networks on August 17.