Protest violence in Berlin on Saturday left 18 police officers injured, as German law enforcement struggled to disperse a 20,000-strong rally. Three police officers were hospitalized as they tried to break up a large gathering of people demonstrating against the country’s coronavirus restrictions, including the face mask requirement. Around 20,000 furious protesters took to the streets in Germany, raging at the the country’s pandemic measures.

The huge numbers on the streets stunned officials, who had only expected 1,000 participants to attend.

Most of the participants were not wearing masks or observing social distancing, as organisers celebrated the march as a “day of freedom”.

Berlin police tweeted that they had been forced to deploy around 1,100 officers to monitor the rally and disperse the crowd.

Some protesters carried banners savaging the response from German Chancellor Angela Merkel and German Health Minister Jens Spahn, among others. 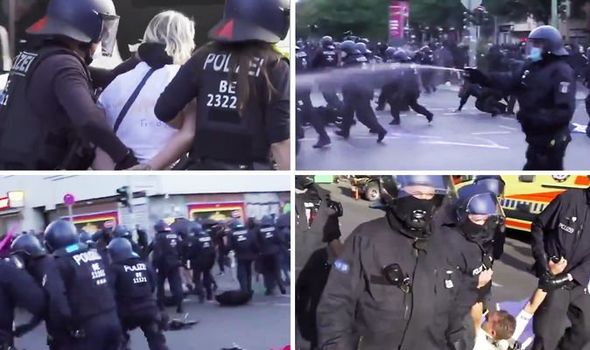 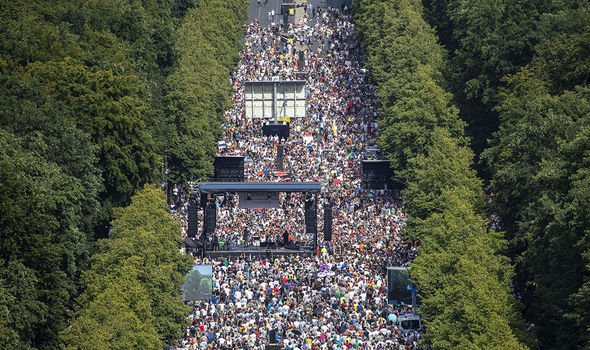 Onlookers a proportion of participants were from the far-right or those involved in coronavirus conspiracy theories.

However, the BBC’s Damien McGuinness said “others were ordinary people who simply object to the government’s approach to the pandemic”.

Berlin police have since launched legal action against the organisers over “non-respect of hygiene rules.”

Leading politicians have condemned the protesters, with Berlin Mayor Michael Müller saying those out demonstrating have not looked at the facts and risked the health of other people. 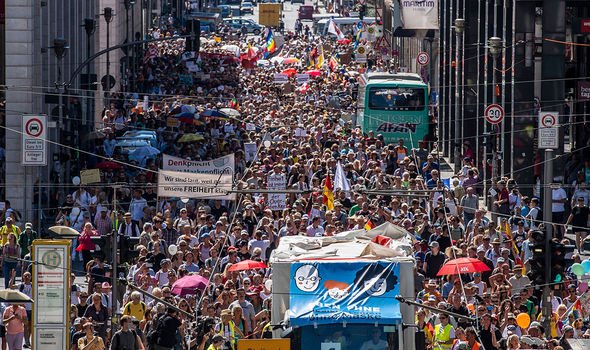 Jens Spahn also responded, tweeting: “Yes, demonstrations must also be possible in the time of coronavirus, but not like this.”

“Distancing, hygiene rules, and face masks serve to protect all of us.”

Lawmaker Saskia Esken, one of the two leaders of the center-left SPD party, slammed the attendees as “covidiots.” 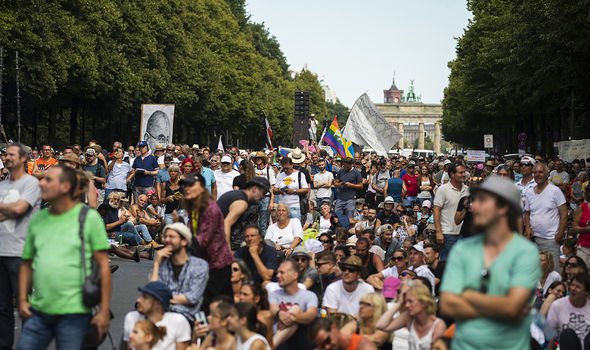 Jan Redmann, regional head of Merkel’s Christian Democrats in the eastern state of Brandenburg, also hit out: “A thousand new infections a day still and in Berlin there are protests against anti-virus measures? We can no longer allow ourselves these dangerous absurdities.”

The protest attendance have sparked concern among Angela Merkel’s cabinet, as the number of infections in Germany has been on the rise recently, with 955 new cases recorded on Saturday and 870 on Friday.

The surge has been attributed to the public becoming “negligent on hygiene and social distancing rules,” according to the Robert Koch Institute, the German government’s disease control and prevention agency.

Germany has had more than 210,000 cases of coronavirus and more than 9,000 related deaths since the pandemic began.