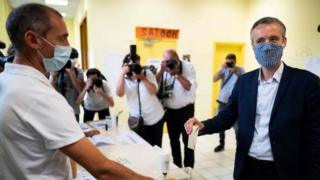 France’s Green party and its left-wing allies have made significant gains in a second round of local elections.

They captured cities such as Lyon, Strasbourg and Besançon.

President Emmanuel Macron centrist LREM party, which lacks the type of support at local level it enjoys nationally, failed to win in any major city.

The poll was delayed in March because of the coronavirus crisis. Restrictions such as mandatory face masks remained in place and turnout was very low.

The first round of municipal elections was held two days before the government declared a lockdown on 17 March.

The second round, which was due a week later, was postponed until the last Sunday of June.

Confirming strong showings in the first round, Green candidates or politicians supported by the Greens have won or were poised to win in a string of cities including Lyon, Marseille, Strasbourg, Bordeaux and Nancy.

In Paris incumbent Mayor Anne Hidalgo – whose Socialist party has been all but wiped out at a national level – won comfortably. Another prominent Socialist, Martine Aubry, was narrowly re-elected in Lille.

In a rare positive development for Mr Macron, his popular Prime Minister Édouard Philippe was elected mayor of the north-western port city of Le Havre.

This could lead to a cabinet reshuffle, although the constitution allows Mr Philippe to name a substitute as mayor while he remains in the government.

A candidate of the far-right National Rally took Perpignan in the south. It is the first time the party has won control of a French town with a population of more than 100,000 people.