BBC Weather has forecast thermometers will shed a few degrees over Friday as strong winds and gales take over the western part of the UK. Most of the country will however continue to enjoy double-digit temperatures for most of the Bank Holiday weekend, with balmy weather due to take over once again by Monday. BBC Weather meteorologist Matt Taylor said: “For some a little bit of welcome rain, in particular for the next few days, but there will be some very strong winds around.

“And things will turn cooler compared to recent days but nothing particularly chilly, and that’s the case this morning.

“One of the warmest May mornings on record, with temperatures in the last hour or two around 19C-20C in Central London, into double figures for many but we have rain for most, particularly across Scotland.

“Some heavy rain, a band of rain pushing across England as well not producing much though across southern counties where many desperately need it.

“There may be a chance for some of you over the coming days.” 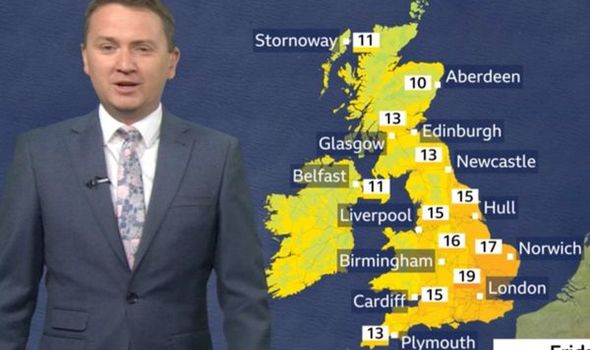 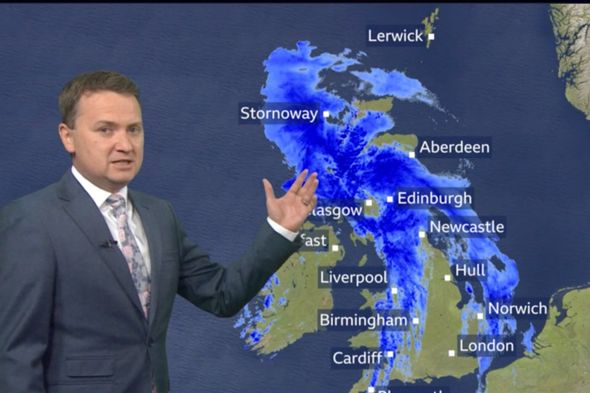 The BBC Weather forecaster said the rain will clear by mid-morning, with sunshine taking over most of the country before some heavy showers resume in the northwest.

Mr Taylor continued: “That rain clearing away from the southeast corner by mid-morning.

“Most places brightening up, sunshine for a time but showers start packing to the west and, for parts of western Scotland, we’ll see a more persistent rain in around the western islands.

“This will be setting the scene here not just for this afternoon but for the rest of this coming Bank Holiday weekend. 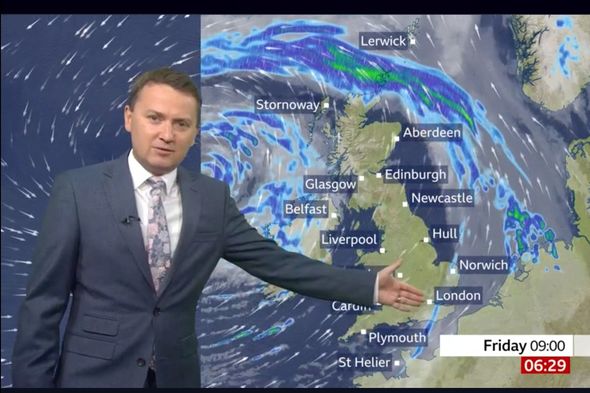 “Winds also feature today, already becoming strong and gusty in the west – could touch 50, maybe 60 mph in some northern and western parts of the country. That could cause some travel disruptions, pushing into rough seas for the west of Scotland.

“Temperatures, even though compared to recent days down a little bit, they’re still not bad for this time of year, 16C to 23C.”

The strong winds forecast for Friday forced the Met Office to issue a yellow weather warning for most of Northern Ireland to remain in place until 9PM.

The Met Office said “some short term loss of power and other services is possible” as well as “some branch and tree damage causing localised transport disruption on roads and railways.” 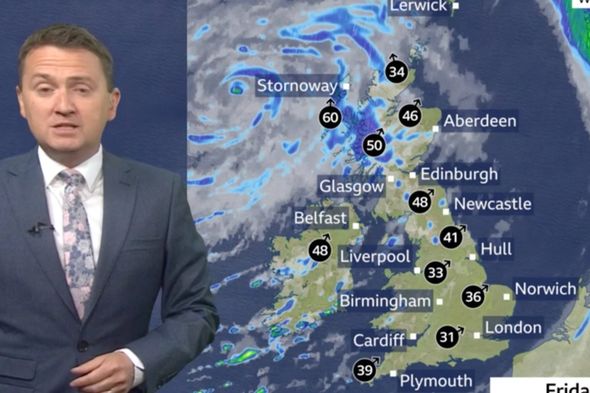 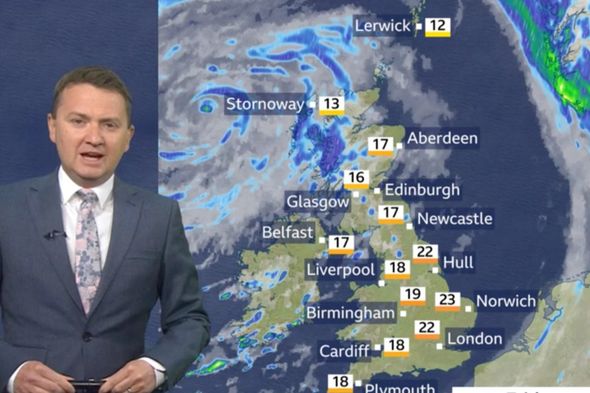 The Met Office also said the windy conditions are expected to continue into Saturday, with more scattered showers targeting Scotland and the north of England.

“Showers for many though these dying out from the west later. Persistent rain for west Scotland. Cooler again.”

But by Sunday, temperatures are expected to rise once again as the weather begins to settle down into drier conditions.

“More changeable in the north, especially north-west, with some fine weather but also cloudier, windier spells and outbreaks of rain here at times.”