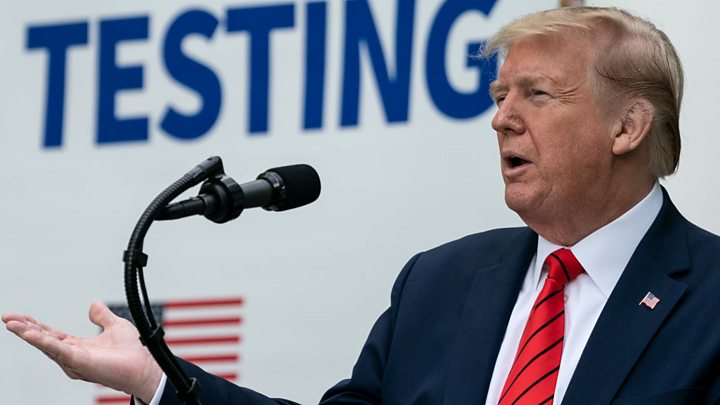 White House staff have been ordered to wear masks when entering the West Wing after two aides tested positive for coronavirus.

The White House personnel office has said that staff must cover their faces at all times except when seated at their desks, socially distant from colleagues.

The directive comes after an aide for Vice-President Mike Pence and a valet for President Trump fell ill.

Appearing without a mask in the Rose Garden for a press briefing on Monday, however, the president claimed he did not need to follow the directive because he kept “far away from everyone”, and played down the White House infections.

“We have hundreds of people a day pouring into the White House” each day, he said. “I think we’re doing a good job containing it.”

Three members of the White House coronavirus task force went into self-isolation for two weeks after possible exposure to the illness.

They include Dr Anthony Fauci, who has become the public face of the fight against the virus in the US.

Her diagnosis came after a valet for US President Donald Trump was also confirmed to have the illness.

Mr Trump shrugged of the White House spread, saying it was “basically one person” who had contracted the virus and that people who were in contact had since tested negative.

What else did President Trump say?

Mr Trump said more funds would be made available to increase testing in states.

The government is to provide $11bn (£8.9bn) to states to meet testing goals this month. States were asked how many tests they hope to conduct in May, and will be given supplies to match the targets.

Senior White House officials who come into regular contact with Mr Trump are currently being tested daily for the coronavirus.

Pressed by journalists on when all Americans could expect to have access to testing, Mr Trump said: “If someone wants to be tested right now they will be able to be tested”. The claim is heavily disputed.

Donald Trump held his press conference to talk about the growing number of coronavirus tests available to Americans, but it was the impact of the pandemic on the White House itself that became the focus of attention.

At an event held in the Rose Garden last week, none of the attendees, including Vice-President Mike Pence, wore masks. Four days later, Pence – regularly at the president’s side – was notably absent, his press secretary having tested positive for the virus days ago. Everyone in attendance, including presidential son-in-law Jared Kushner, had masks, after a directive requiring them for all White House staff.

It was an order that applied to everyone – that is, except the president, who continued to decline the protection.

This made for a striking contrast, as Trump spoke of the “pent-up demand” and “enthusiasm” in the US for reopening businesses and easing government-ordered social distance restrictions, while denying that the system that protects White House personnel from infection had broken down.

“We have a lot of people coming in and out,” he said. “We are running a country.”

It underlines a fundamental challenge facing the US in the days ahead. Can the US economy reopen and recover when even the White House isn’t safe?

What’s going on with testing?

For weeks, Mr Trump has sought to encourage an easing of lockdown measures throughout the US, arguing it was time to get back to work amid dire economic news.

However, public health experts have warned that easing restrictions too early could lead to a resurgence of transmissions and a second coronavirus wave.

The US Centers for Disease Control and Prevention (CDC) had issued guidelines suggesting that lockdowns should not be eased unless a region has seen 14 days of declines in infections and be able to conduct 30 tests for every thousand residents.

According to the CovidTracking Project, a charity, they US conducted an average of 248,000 daily tests in the first week of May.

According to the White House, the number has increased to 300,000 a day, but prominent public health researchers say at least 900,000 daily tests are needed before the US should reopen.

As of this week, the US has tested only 2.75% of its 330 million population, and no state has tested 10% of residents. In over a dozen states where lockdown measures have been relaxed, including Texas, South Carolina and Arizona, less than 2% of residents have been tested.

Last week, the White House rejected the CDC’s reopening guidance, but some states are adopting the standards.