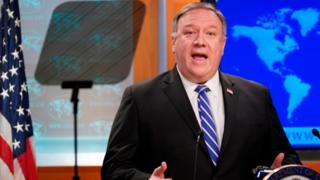 The US and other countries have raised questions about whether China was fully transparent when the virus first emerged there.

So what do we know about what happened in China, and what did it say and do about the outbreak?

1 December – The first onset of symptoms are observed, according to the Lancet.

However, it’s believed the virus first appeared some time in November.

27 December – Chinese authorities are told about a Sars-like disease by a doctor in a provincial hospital in Hubei province.

By this point, cases are multiplying.

30 December – The health commission in Wuhan notifies local hospitals of a “pneumonia of unclear cause”, and asks them to report any related information of suspicious cases in the past week.

Ai Fen, a leading doctor at Wuhan Central hospital, receives medical results from a patient with a suspected coronavirus.

Dr Ai takes a photo of the results and sends it to another doctor in the area. It circulates among the medical community in Wuhan.

31 December – Chinese officials confirm they are investigating 27 cases of viral pneumonia and dispatch a team of health experts to the region.

Authorities say seven are in a critical condition yet no human-to-human transmission has been identified.

The authorities alert the World Health Organization (WHO).

1 January – A hospital in Wuhan posts on the Chinese social media platform WeChat that they are “fighting a mysterious pneumonia”.

Dr Ai Fen says she is reprimanded by a hospital disciplinary committee for “spreading rumours”.

The Wuhan Public Security Bureau detains eight people for spreading rumours about the virus, reporting it on a Chinese news programme, Xinwen Lianbo, a show watched by millions.

The WHO puts itself on an emergency footing to deal with a potential outbreak.

Chinese authorities shut down Huanan Seafood Wholesale Market, the location of a number of cases and a potential source of the virus.

3 January – Various allegations gain traction on Chinese social media, such as local health authorities silencing hospital staff from speaking out about the virus.

(We are unable to independently verify these posts and many were removed by Chinese authorities which heavily censor the internet.)

5 January – Wuhan health authorities put out their first public information on the disease, saying it does not spread from human-to-human.

7 January – Chinese top leaders, including President Xi Jinping, discuss the outbreak at a meeting of the standing committee of the politburo, indicating they knew about the virus from an early date.

8 January – A second team of experts is sent to investigate the outbreak.

9 January – China makes public the genome of the coronavirus, proving its link to Sars and Mers viruses. Scientists are now able to develop tests for the virus.

11-17 January – The Chinese Communist Party (CCP) conducts its important annual political meetings for Hubei province. There are no reports of increases in cases during this period.

14 January – The WHO posts on Twitter that “preliminary investigations conducted by the Chinese authorities have found no clear evidence of human-to-human transmission.”

However, there are reports that local hospitals suspect otherwise due to the number of patients.

15 January – A patient returns to the US from Wuhan and becomes the first US case of Covid-19.

20 January – A group of health experts at China’s National Health Commission confirm human-to-human transmission of the virus, as cases are identified elsewhere in the country.

The first case in South Korea is announced.

20 – 21 January – The WHO sends a delegation to conduct field research in Wuhan. They say evidence suggests human-to-human transmission is taking place but more analysis is needed.

21 January – China’s flagship state-run newspaper, People’s Daily, refers to coronavirus for the first time and what President Xi is doing to tackle it.

Up until then, state media is either ignoring or underplaying the outbreak, choosing to concentrate on plans for the Lunar New Year.

Responding to international pressure about a potential cover-up, Beijing’s top political body responsible for law and order says: “Anyone who deliberately delays and hides the reporting of [virus] cases out of his or her own self-interest will be nailed on the pillar of shame for eternity.”

The WHO discuss if they should announce that the outbreak is an international health emergency.

23 January – Wuhan (and nearby cities) are put under lockdown.

The WHO decides not to declare an international health emergency.

24 January – The Chinese government bans the trade of wildlife throughout the country.

24-30 January – China celebrates the Lunar New Year holiday, when millions of people travel across the country.

28 January – Dr Tedros Ghebreyesus, director general of the WHO, meets President Xi to discuss the outbreak, highlighting it as the institution’s top priority.

30 January – The WHO declares Covid-19 a Public Health Emergency of Global Concern – this follows 82 confirmed cases outside China.

Tags: China DID do outb So what when