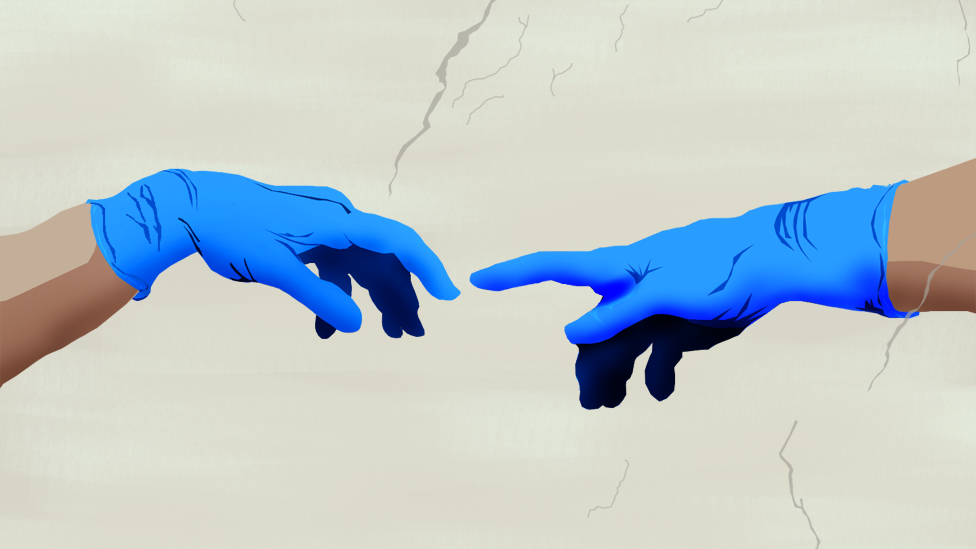 Around the world, humans are struggling to ignore thousands of years of bio-social convention and avoid touching another. Shaking hands might be one of the hardest customs to lose in the post-pandemic world but there are alternatives, writes James Jeffrey.

The humble handshake spans the mundane to the potent, ranging from a simple greeting between strangers who will never meet again, to the sealing of billion-dollar deals between business titans.

There are various ideas about the origin of the handshake. It may have originated in ancient Greece as a symbol of peace between two people by showing that neither person was carrying a weapon. Or the shaking gesture of the handshake may have started in Medieval Europe, when knights would shake the hand of others in an attempt to shake loose any hidden weapons.

The Quakers are credited with popularising the handshake after they deemed it to be more egalitarian than bowing.

The handshake is a “literal gesture of human connectedness,” a symbol of how humans have evolved to be deeply social, tactile-orientated animals, says Cristine Legare, a psychology professor at the University of Texas at Austin.

With a history tracing back thousands of years, the handshake may be too entrenched to be easily halted.

“The fact we went for the elbow bump as an alternative shows how important touch is – we didn’t want to lose that physical connecting,” says Prof Legare.

That biological drive to touch and be touched is found in other animals as well. In the 1960s American psychologist Harry Harlow demonstrated how vital touch and affection was for the development of young rhesus monkeys.

Other examples from the animal kingdom include our closest cousins: chimpanzees typically touch palms, hug and sometimes kiss as a form of greeting. Giraffes use their necks that can reach two metres in length to engage in a type of behaviour called “necking” – with male giraffes entwining their neck with each other’s and swaying and rubbing to assess the other’s strength and size to establish dominance.

That said, numerous forms of human greeting exist around the world that avoid the transmission trap. Many cultures embrace pressing the palms of hands together with fingers pointing up while accompanied by a slight bow, the traditional Hindu Namaste greeting being one of the most well-known.

In Samoa there is the “eyebrow flash” that comprises raising your eyebrows while flashing a big smile at the person you are greeting.

In Muslim countries, a hand over a heart is a respectful way to greet someone you are not accustomed to touching. And there is the Hawaiian shaka sign, adopted and popularised by American surfers, made by curling the three middle fingers and extending you thumb and smallest finger while shaking your hand back and forth for emphasis.

Physical touch has not always been deemed so critical. During the first half of the 20th Century, many psychologists believed that showing affection to children was simply a sentimental gesture that served no real purpose – even cautioning that displays of affection risked spreading diseases and contributing to adult psychological problems.

In her book Don’t Look, Don’t Touch, behavioural scientist Val Curtis of the London School of Hygiene and Tropical Medicine says that one possible reason that handshakes and kisses on cheeks endure as greetings is because they signal that the other person is trusted enough to risk sharing germs with – hence the history of the practices going in and out of style depending on public health concerns.

In the 1920s, articles appeared in the American Journal of Nursing that warned of hands being the agents of bacterial transfer, and recommending that Americans adapt the Chinese custom at the time, of shaking one’s own hands together when greeting a friend.

There have been more recent objections to handshakes that pre-date the coronavirus outbreak: in 2015, a UCLA hospital established a handshake-free zone in its intensive care unit (the UCLA policy only lasted six months).

Meanwhile, many Muslim women throughout the world have objected to handshakes based on religious grounds.

But despite such reservations and incidences of conscientious objectors to handshakes, as the 20th century progressed the gesture evolved into a near universal and unassailable symbol of professional greeting.

Scientific studies of the ritual have identified how a good handshake activates the same part of the brain that processes other types of reward stimulus such as good food, drink and even sex.

A future without handshakes?

As some states in the US begin to ease lockdown measures, the future of the handshake remains uncertain.

“I don’t think we should ever shake hands ever again, to be honest with you,” Dr Anthony Fauci, a key member of the White House coronavirus task force, said back in April.

“Not only would it be good to prevent coronavirus disease; it probably would decrease instances of influenza dramatically in this country.”

Social distancing guidelines will likely stay in place for a long time to come, according to US government’s guidelines for re-opening the country, especially for vulnerable people like the elderly and those with medical co-morbidities such as lung disease, obesity and diabetes.

This could give rise to what Stuart Wolf, associate chair for Clinical Integration and Operations at Dell Medical, calls a “science-fiction dystopia” where society would be divided into those who can touch and be touched, and those who must remain isolated.

“We already place such a premium on youth and vigour in society, and this forced artificial distinction between the old and infirm and the young and healthy probably will hit some folks very hard.”

The urge to reach out – physically – is deeply wired into us. There’s a reason why a US president is estimated to shake hands with 65,000 people per year.

“Habits die hard,” says Elke Weber, a professor of psychology and public affairs at Princeton University who studies how people take risks. “On the other hand, habits and social customs can and do change when the social and economic and, in this case, health context changes, [think of] foot binding in China, which was also an ancient custom.”

There are already lots of non-contact options. Bowing, for example, is already very widely practiced around the world – and has been credited for fewer deaths due to coronavirus in Thailand. Then there is waving, nodding, smiling and myriad hand signals that don’t involve physical contact.

But Prof Legare notes that one of Covid-19’s cruel ironies is that it is precisely when humans are faced with stressful circumstances that they depend on human touch.

“Think of the ways we respond when people are grieving after death or something bad that’s happened, it is with a hug, or it could just be sitting beside a person and touching a shoulder.”

Sanitary conventions like fist-bumps and elbow taps just don’t quite cut the mustard when it comes to human connectivity.

Whenever they occur there is always an internalised complicit knowledge of how they go against the grain of intuitive friendliness, notes Steven Pinker, Harvard University’s Johnstone Family Professor of Psychology, in an article for The Harvard Gazette, the university’s official news website.

“That explains why, at least in my experience, people accompany these gestures with a little laugh, as if to reassure each other that the superficially aggressive displays are new conventions in a contagious time and offered in a spirit of camaraderie,” Prof Pinker says.

Due to her work in public health, including infectious diseases, Deliana Garcia was already moving away from handshakes with most people. But some habits are harder to break than others.

“I am a fanatical hugger,” says Ms Garcia, noting social distancing with her 85-year-old mother has been particularly hard.

“She is so close, and I just want to walk up to her and smooch her little face and give her a kiss and tell her I love her.”

This powerful urge collides with concerns about transmission, resulting in an “awkward dance” between the two of them, she says.

“Even as she is approaching, I can feel myself growing anxious – what if I make her sick?” Ms Garcia says. “So I withdraw, but if she starts to move away, I follow. I need the tactile to assure myself and yet I can’t let her get close. We sort of repel one another like identical poles on magnets.”

As hard as a future without handshakes or touch may be, it is better than the alternative, Prof Weber says. “I don’t think people are overreacting at this point, quite the opposite.”

“Survival or trying to stay alive is another important basic human drive. The alternative is to go back to life as we knew it and ignore the fact that large numbers of elderly, overweight and people with co-morbidities will die until we establish herd immunity, which will take considerable time.”

But don’t give up on the humble handshake just yet. While avoiding disease is an essential part of human survival, so is living fulfilling and complex social lives, says Arthur Markman, a professor in the department of psychology at the University of Texas at Austin.

“Perhaps we start by focusing on more routine handwashing, hand sanitisers, and strategies to avoid touching your face rather than giving up touch altogether,” he says.

“The real concern is that we will develop a new normal that is devoid of touch, and so we will not realise what we are missing by not having any tactile contact with the people in our social network.”

Tags: again ever hands shake we Will